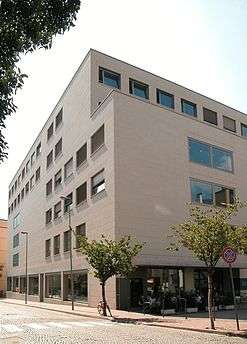 The main building of the Free University of Bozen-Bolzano 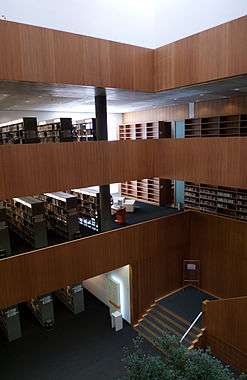 The Library of the Free University of Bozen-Bolzano 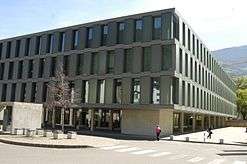 The premises of Brixen

The Free University of Bozen-Bolzano (FUB or unibz) aims to offer students a multilingual, practice-oriented education that meets the demands of the local and the European labour market. Lectures and seminars are held in German, Italian and English.[1] The only exception is the Faculty of Education, which offers German, Italian and Ladin language speaking students separate training sections. The university offers study programmes ranging from bachelor's degrees to doctorates.

The emphasis of teaching is to provide theoretically sound and practice-orientated training. A large proportion of educational activities take place as seminars, lectures given by guest speakers, practical training and workshops. Within the framework of the academic exchange program students are encouraged to spend one or more semesters at universities abroad.

The university has three campuses: at Bolzano, Brixen and Bruneck. The buildings in Bolzano were designed by the architects Matthias Bischoff and Roberto Azzola[2] of Zurich[3] and those at Brixen by Regina Kohlmeyer and Jens Oberst from Stuttgart. The latter won in 2005 the 9th architecture prize of the city of Oderzo.[4]

The rectors of the university have been Alfred Steinherr, an economist from Luxembourg, from 1998 to 2003, the Swiss linguist Rita Franceschini, from 2004 to 2008, and the German sociologist Walter Lorenz, from 2008.[5]

The School of Economics and Management is based at Bozen-Bolzano and Bruneck-Brunico. It offers three bachelor and two master's degree programs.

The Faculty of Education is in Brixen-Bressanone and the following courses are active:

The Faculty of Computer Science is based in Bozen-Bolzano and has the following courses:

Faculty of Science and Technology

The Faculty of Science and Technology has the following active courses:

The Faculty of Design and Art offers the following courses:

The Faculty of Computer Science at the Free University of Bozen-Bolzano is very active in this way and is amongst the research centers recognized by the European Union as a leader in this program. There are three European Master Programmes in the area of computer science running in this university, under Erasmus Mundus Programme:

Since 2011 there has been a Studium Generale (multidisciplinary) course, which offers a wide range of lectures in fields of general interest.[6]

According to the numbers provided on the website, 275 research projects have been conducted within the university since 1998.[7]

According to library ranking system issued by German library networks (BIX project) in 2009, this university has the second best library amongst German-speaking states (Germany, Switzerland, Austria and South Tyrol in Italy).[8]