University of Modena and Reggio Emilia

The medieval university disappeared by 1338 and was replaced by "three public lectureships" which did not award degrees and were suspended in the 1590s "for lack of money". The university was not reestablished in Modena until the 1680s and did not receive an imperial charter until 1685.[1]

Some famous students who attended the University include Ludovico Antonio Muratori, a noted Italian historian and scholar who graduated in 1694, the playwright Carlo Goldoni in the 17th century and, in the last century, Sandro Pertini, who became President of the Italian Republic.

The University of Modena dates back to 1175, a few decades after the birth of the University of Bologna, making it one of the oldest universities in Italy and the world. It was established by the city of Modena, which financed professors' contracts through local taxation. The first to be invited to teach was Pillio da Medicina from Bologna. The School of Law (Studium iuris) was subsequently formed around him and made up the nucleus of the University.

In the two centuries that followed, the Studium expanded from legal studies to include the training of notaries and the study of medicine as well. The subsequent history of the University was profoundly marked by the changing fortunes of the ruling Este family. Between the sixteenth and seventeenth centuries, when the Court of Este settled in Ferrara, academic titles were no longer awarded, and the activities of the Studium were greatly reduced.

Only after the Court moved to Modena in 1772 did the University regain its original splendour and academic prestige, receiving an imperial charter from Duke Francis II. The University offered multiple disciplines, including law, medicine and surgery, pharmacy, and mathematical, physical, and natural sciences.

In fact, Reggio Emilia already had an ancient and noble tradition of university studies which ended in 1772 following the reform of Duke Francis II of Este. A School of Law, proposed by the city, is mentioned as early as 1188. In 1532, Emperor Carl V granted the College of Judges the privilege of awarding diplomas and degrees in Law. Duke Alfonse II of Este established a Medical College in 1561 and ten years later, Emperor Maximilian II authorized the conferral of degrees in medicine. In the seventeenth century, a School of Letters was opened at the Seminary and, in the following century, a chair of Scholastic Theology was established along with schools of grammar and rhetoric. In 1752, the University of Reggio was inaugurated in Palazzo Busetti and consisted of four faculties: Law, Theology, Medicine and Philosophy. However, its activities continued only until 1772 when, after the reform of Francis II, its right to grant degrees was taken away and given solely to the University of Modena.

The creation of the University of Modena and Reggio Emilia not only combined the ancient traditions of the two cities into one institution, but also gave a new and powerful boost to the development of the University, resulting in a substantial growth of scientific and academic activities, which still continues today.

The university is divided into fourteen Departments: 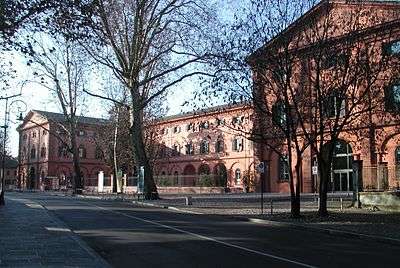 View of the Reggio Emilia campus