The University of Pisa (Italian: Università di Pisa, UniPi) is an Italian public research university located in Pisa, Italy. It was founded in 1343[1] by an edict of Pope Clement VI. It is the 19th oldest extant university in the world and the 10th oldest in Italy.[2] The prestigious university is ranked within the top 10 nationally and the top 400 in the world according to the ARWU and the QS. It houses the Orto botanico di Pisa, Europe's oldest academic botanical garden, which was founded in 1544.

The University of Pisa is part of the Pisa University System, which includes the Scuola Normale Superiore and the Sant'Anna School of Advanced Studies. The university has about 50,000 students (of which 46,000 are undergraduate and postgraduate studies, and 3,500 are doctoral and specialization studies).

Pisa has an intense athletic rivalry with the University of Pavia, which traditionally culminates in the Pisa-Pavia Regatta (Regata Pisa-Pavia), the oldest competition of this kind in Italy, and second in Europe only to the Oxford Cambridge boat race.

In 2013, the University of Pisa finished with La Sapienza University of Rome in first place among the Italian universities, according to the Academic Ranking of World Universities.[4][5][6] 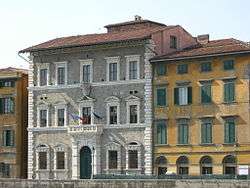 Palazzo alla Giornata on the riverbank Lungarno Pacinotti, home of the Rectorate 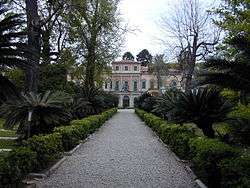 The University of Pisa was officially established on September 3, 1343.[1] However, a number of scholars claim its origin dates back to the 11th century.

The first reliable data on the presence of secular and monastic schools of law in Pisa is from the 11th century and the second half of the 12th century, a time when Pisa had already achieved a remarkable economic development. The following century formed the first documents to prove the presence of doctors of medicine and surgery.

The earliest evidence of a Pisan Studium dates to 1338, when jurist Ranieri Arsendi transferred to Pisa from Bologna. He, along with Bartolo da Sassoferrato, a lecturer in civil law, were paid by the municipality to teach public lessons.

The papal bull In supremae dignitatis, granted by Pope Clement VI on September 3, 1343, recognized the Studium of Pisa as a Studium Generale; an institution of further education founded or confirmed by a universal authority, the Papacy, or Empire. Pisa was one of the first European universities to boast this papal attestation, which guaranteed the universal and legal value of its educational qualifications.

Pisa and its Studium underwent a period of crisis around the turn of the 15th century: the Florentines' conquest of the town led to the university's closure in 1403. In 1473, thanks to Lorenzo de Medici, the Pisan Studium resumed its systematic development, and the construction of a building for holding lessons was provided for in 1486. The building — later known as Palazzo della Sapienza (the "Building of Knowledge") — was located in the 14th-century Piazza del Grano. The image of a cherub was placed above the gate Dell'Abbondanza (the "Gate of Abundance"), leading to the piazza, and today is still the symbol of the university.

Following the rebellion and the war against Florence in 1494, the Pisan Studium suffered a period of decline and was transferred to Pistoia, Prato and Florence. The ceremonial reopening of the university on November 1, 1543, under the rule of Duke Cosimo I de Medici, was considered as a second inauguration. The quality of the university was furthered by the statute of 1545 and the Pisan Athenaeum became one of the most significant in Europe for teaching and research. The chair of Semplici (botany) was held by Luca Ghini, founder of the world's first botanical gardens. He was succeeded by Andrea Cesalpino, who pioneered the first scientific methodology for the classification of plants, and is considered a forerunner in the discovery of blood circulation. Gabriele Falloppio and Marcello Malpighi lectured in anatomy and medicine. Galileo Galilei, who was born and studied in Pisa, became professor of mathematics at the Pisan Studium in 1589.

The university's role as a state institution became more accentuated during the Medici Grand Duchy period. A protectionist policy ensured a consistent nucleus of scholars and teachers. Laws issued by Cosimo I, Ferdinando I and Ferdinando II obliged those who intended to obtain a degree to attend the Studium of Pisa. Many notable figures lectured at Pisa, especially in the fields of law and medicine.

The university's development continued under the Lorenas. They completed the construction of the astronomic observatory (a project initiated by the Medicis), and enriched the university library with important publications. They helped develop the botanical gardens, and natural science museum, and established new chairs including experimental Physics and Chemistry.

The annexation of Tuscany to the Napoleonic Empire resulted in the transformation of the Studium into an Imperial Academy. The Athenaeum became a branch of the University of Paris, and the courses and study programs were structured following the French public education model. Five new faculties were established: (theology, law, medicine, science and literature), along with examinations, different qualification titles and graduation theses. In 1810 the scuola normale was established, after the École normale of Paris.

In 1839–1840, the Director of Education Gaetano Giorgini brought about the most important reform in the University of Pisa by raising the number of faculties to six (theology, law, literature, medicine, mathematics, and natural sciences). Giorgini also created the world's first chair of agriculture and sheep farming.

In 1846, the Scuola Normale reopened. At the same time, liberal and patriotic ideals were spreading at Athenaeum and a battalion of the university (composed of lecturers and students) distinguished itself in the Battle of Curtatone and Montanara in 1848.

During the Second Restoration in 1851, Leopoldo II united the universities of Pisa and Siena in a unique Etruscan Athenaeum, motivated in part by economic reasons, but primarily for political control. The faculties of theology and law rested at Siena, while those of literature, medicine, mathematics and natural sciences remained at Pisa. Following the Florentine insurrection and the fleeing of the Grand Duke in 1859, one of the initial measures imposed by the provisory government was the restitution to the city of Pisa of its Studium with all six of its faculties.

With the birth of the Kingdom of Italy, the University of Pisa became one of the new state's most prestigious cultural institutions. The first European Institute of Historical Linguistics was founded in Pisa in 1890. Between the second half of the 19th century and first half of the 20th century, the prestigious lecturers who taught at Pisa included the lawyers Francesco Carrara and Francesco Buonamici; philologists Domenico Comparetti and Giovanni D'Ancona; historians Pasquale Villari, Gioacchino Volpe and Luigi Russo; philosopher Giovanni Gentile; economist Giuseppe Toniolo and mathematicians Ulisse Dini and Antonio Pacinotti.

During the years of fascism, the Pisa Athenaeum was an active centre for political debate and antifascist organisation. After the second world war, the University of Pisa returned to the avant-garde style of learning in many fields of knowledge. To the faculties of engineering and pharmacy, established pre-war, were added economics, foreign languages and literature and politics. In 1967 the Scuola Superiore di Studi Universitari e Perfezionamento S. Anna was founded which, together with La Scuola Normale, formed a prestigious learning and teaching centre.

Today, the University of Pisa has 20 departments, with high-level research centres in the sectors of agriculture, astrophysics, computer science, engineering, mathematics, medicine and veterinary medicine. The university has close relations with the Pisan Institutes of the National Research Council, with many cultural institutions of national and international importance, and with industry, especially that of information technology, which experienced a phase of rapid expansion in Pisa during the 1960s and 1970s.

The University of Pisa consists of 20 departments. These departments offers several courses in their related field of study:

PhD studies are usually offered and arranged by the departments. The lectures are mostly given in Italian, except for a number of courses at the faculty of foreign languages and literature, some scientific programmes, such as the international MSc in aerospace engineering (EuMAS), Master in Business Informatics, the Master of Science in Space Engineering[7] and the Master in Computer Science and Networking,[8] jointly offered with Scuola Superiore Sant'Anna. Students also have at their disposal a language centre, where they can attend courses in foreign languages, a sports centre (Cus Pisa) that arranges for many sports intramural leagues and allows sports practice in almost all the disciplines available in Italy, and three university refectories (Mense universitarie). The University of Pisa is not organized in the form of one unique campus, but rather its many buildings are scattered throughout the whole Pisa area, especially in the city centre.

Notable people who have attended the University of Pisa include:

In politics and government:

Notable people who have attended the University of Pisa include:

Prominent scholars who have taught at the University of Pisa include:

The University of Pisa is mentioned in the film Don Juan (1926).