Not to be confused with the operating system developed by the GNU Project, GNU. 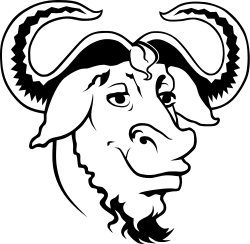 GNU mascot, by Aurelio A. Heckert[1] (derived from a more detailed version by Etienne Suvasa)[2]

i/ɡnuː/[3] is a free software, mass collaboration project, announced on September 27, 1983, by Richard Stallman at MIT. Its aim is to give computer users freedom and control in their use of their computers and computing devices, by collaboratively developing and providing software that is based on the following freedom rights: users are free to run the software, share it (copy, distribute), study it and modify it. GNU software guarantees these freedom-rights legally (via its license), and is therefore free software; the use of the word "free" always being taken to refer to freedom.

In order to ensure that the entire software of a computer grants its users all freedom rights (use, share, study, modify), even the most fundamental and important part, the operating system (including all its numerous utility programs), needed to be free software. According to its manifesto, the founding goal of the project was to build a free operating system and, if possible, "everything useful that normally comes with a Unix system so that one could get along without any software that is not free." Stallman decided to call this operating system GNU (a recursive acronym meaning "GNU's not Unix"), basing its design on that of Unix, a proprietary operating system.[4] Development was initiated in January 1984. In 1991, the Linux kernel appeared, developed outside of the GNU project by Linus Torvalds,[5] and in December 1992 it was made available under version 2 of the GNU General Public License.[6] Combined with the operating system utilities already developed by the GNU project, it allowed for the first operating system that was free software, known as Linux (by those outside the GNU Project) or as GNU/Linux (by proponents of the GNU Project).

Richard Stallman announced his intent to start coding the GNU Project in a Usenet message in September 1983.[7]

When the GNU project first started they "had an Emacs text editor with Lisp for writing editor commands, a source level debugger, a yacc-compatible parser generator, and a linker".[8] The GNU system required its own C compiler and tools to be free software, so these also had to be developed. By June 1987, the project had accumulated and developed free software for an assembler, an almost finished portable optimizing C compiler (GCC), an editor (GNU Emacs), and various Unix utilities (such as ls, grep, awk, make and ld).[9] They had an initial kernel that needed more updates.

Once the kernel and the compiler were finished, GNU was able to be used for program development. The main goal was to create many other applications to be like the Unix system. GNU was able to run Unix programs but was not identical to it. GNU incorporated longer file names, file version numbers, and a crashproof file system. The GNU Manifesto was written to gain support and participation from others for the project. Programmers were encouraged to take part in any aspect of the project that interested them. People could donate funds, computer parts, or even their own time to write code and programs for the project.[4]

The origins and development of most aspects of the GNU Project (and free software in general) are shared in a detailed narrative in the Emacs help system. (C-h g runs the Emacs editor command describe-gnu-project.) It is the same detailed history as at their web site.

The GNU Manifesto was written by Richard Stallman to gain support and participation in the GNU Project. In the GNU Manifesto, Stallman listed four freedoms essential to software users: freedom to run a program for any purpose, freedom to study the mechanics of the program and modify it, freedom to redistribute copies, and freedom to improve and change modified versions for public use.[10][11] To implement these freedoms, users needed full access to code. To ensure code remained free and provide it to the public, Stallman created the GNU General Public License (GPL), which allowed software and the future generations of code derived from it to remain free for public use.

Although most of the GNU Project's output is technical in nature, it was launched as a social, ethical, and political initiative. As well as producing software and licenses, the GNU Project has published a number of writings, the majority of which were authored by Richard Stallman.

The GNU project uses software that is free for users to copy, edit, and distribute. It is free in the sense that users can change the software to fit individual needs. The way programmers obtain the free software depends on where they get it. The software could be provided to the programmer from friends or over the Internet, or the company a programmer works for may purchase the software.

Copyleft is what helps maintain free use of this software among other programmers. Copyleft gives the legal right to everyone to use, edit, and redistribute programs or programs' code as long as the distribution terms do not change. As a result, any user who obtains the software legally has the same freedoms as the rest of its users do.

Today a stable version (or variant) of GNU can be run by combining the GNU packages with the Linux kernel, making a functional Unix-like system. The GNU project calls this GNU/Linux, and the defining features are the combination of:

Within the GNU website a list of projects are laid out and each project has specifics for what type of developer is able to perform the task needed for a certain piece of the GNU project. The skill level ranges from project to project but anyone with background knowledge in programming is encouraged to support the project.

The packaging of GNU tools, together with the Linux kernel and other programs, is usually called a Linux distribution (distro). The GNU Project calls the combination of GNU and the Linux kernel "GNU/Linux", and asks others to do the same,[25] resulting in the GNU/Linux naming controversy.

Today most Linux distros combine GNU packages with a Linux kernel which contains proprietary binary blobs and a number of proprietary programs.

Mostly this includes distributions that are a combination of GNU packages with a Linux-libre kernel (a modified Linux kernel, that removes binary blobs, obfuscated code and portions of code under proprietary licenses) and consist only of free software (eschewing proprietary software entirely).[26][27][28] Distributions that have adopted the GNU FSDG includes Dragora GNU/Linux-libre, gNewSense, Parabola GNU/Linux-libre, Trisquel GNU/Linux, Ututo, and a few others.[29]

The Fedora Project distribution license guidelines were used as a basis for the FSDG.[30]

The GNOME desktop effort was launched by the GNU Project because another desktop system, KDE, was becoming popular but required users to install Qt, which was then proprietary software. To prevent people from being tempted to install KDE and Qt, the GNU Project simultaneously launched two projects. One was the Harmony toolkit. This was an attempt to make a free software replacement for Qt. Had this project been successful, the perceived problem with the KDE would have been solved. The second project was GNOME, which tackled the same issue from a different angle. It aimed to make a replacement for KDE that had no dependencies on proprietary software. The Harmony project didn't make much progress, but GNOME developed very well. Eventually, the proprietary component that KDE depended on (Qt) was released as free software.[31]

GNU Enterprise (GNUe) is a meta-project started in 1996,[32] and can be regarded as a sub-project of the GNU Project. GNUe's goal is to create free "enterprise-class data-aware applications" (enterprise resource planners etc.). GNUe is designed to collect Enterprise software for the GNU system in a single location (much like the GNOME project collects Desktop software).

In 2001, the GNU Project received the USENIX Lifetime Achievement Award for "the ubiquity, breadth, and quality of its freely available redistributable and modifiable software, which has enabled a generation of research and commercial development".[33]