For people with Gaume as a surname, see Gaume (surname). 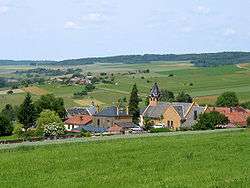 The countryside near Torgny

Gaume is a region in the extreme southeast of Belgium. Situated at a lower altitude than the Ardennes, it borders to the south the French region of Lorraine (although some consider the bordering parts of Lorraine to be Gaume Française), to the east the Land of Arlon (in Luxembourgish: Arelerland) and to the north the Belgian part of the Ardennes.

Gaume was part of the Grand-Duchy of Luxembourg till 1839, the year it was integrated in the newly created Belgian province of Luxembourg.

It is composed of the districts of Chiny, Étalle, Florenville, Habay, Meix-devant-Virton, Musson, Rouvroy, Tintigny and Virton, although some villages in the northern districts are not in Gaume (as Suxy or Hachy). Historically, the area around Montmédy, Carignan and Charency-Vezin, that was ceded to France by Spain in 1659, is also part of Gaume. Therefore, strictly speaking the southern border of the region is not the border with France. The French part of the Gaume, named Gaume Française by some, is part of a greater cluster of former Luxembourgish territories known as French Luxembourg. It consists of the canton of Montmédy, almost all of the canton of Carignan and parts of the cantons of Damvillers and Longuyon. It largely corresponds with the now French part of the county of Chiny.

The unofficial capital of the Gaume region is Virton.

Temperatures in this region are often 1°C to 3°C higher than in other parts of the province of Luxembourg thanks to a distinctive microclimate.

Gaume is a popular destination for tourism in Belgium.

The Lorrain language, a langue d'oïl distinct from the Walloon language, is a minority language in Gaume where it is known as Gaumais. Although it is in decline, several local authors are trying to revive its usage. Lorrain is recognised as a regional language of Wallonia.

This article is issued from Wikipedia - version of the 11/12/2015. The text is available under the Creative Commons Attribution/Share Alike but additional terms may apply for the media files.