Gauteng (/xaʊˈtɛŋ/; Sotho pronunciation [xɑ́.ú.ˈtʼè.ŋ̀]), which means "place of gold", is one of the nine provinces of South Africa. It was formed from part of the old Transvaal Province after South Africa's first all-race elections on 27 April 1994. It was initially named Pretoria–Witwatersrand–Vereeniging (PWV) and was renamed "Gauteng" in December 1994.[3]

Situated in the Highveld, Gauteng is the smallest province in South Africa, accounting for only 1.5% of the land area.[4] Nevertheless, it is highly urbanised, containing the country's largest city, Johannesburg, its administrative capital, Pretoria, and other large industrial areas such as Midrand and Vanderbijlpark. As of 2015, it has a population of nearly 13.2 million, making it the most populous province in South Africa.[1]

The name Gauteng is derived from the Sotho name, "gauta" meaning "gold" with the locative suffix "-eng".[3] There was a thriving gold industry in the province following the 1886 discovery of gold in Johannesburg.[5] In Sesotho, the name "Gauteng" was used for Johannesburg and surrounding areas long before it was adopted in 1994 as the official name of a province.

Gauteng, formerly known as Pretoria–Witwatersrand–Vereeniging (PWV), was carved out of the old Transvaal province in 1994, although the terminology "PWV", describing the region existed long before that.[6]

The history of the area that is now Gauteng can be traced back to the early 1800s when settlers originating from the Cape Colony defeated chief Mzilikazi and started establishing villages in the area.[7] After the discovery of gold in 1886, the region proceeded to become the single largest gold producer in the world and the city of Johannesburg was founded.[6][7] The older city Pretoria was not subject to the same attention and development.[7] Pretoria grew at a slower rate and was highly regarded due to its role in the Second Boer War.[7] The Cullinan Diamond which is the largest diamond ever mined was mined near Pretoria in a nearby town called Cullinan in the year 1905.[6]

Gauteng has only been properly documented since the 1800s[7] and as a result, not much information regarding its history predating the 1800s is available.[7] At the Sterkfontein caves, some of the oldest fossils of hominids have been discovered, such as Mrs. Ples and Little Foot.[7]

Many crucial events happened in present-day Gauteng with regards to the anti-apartheid struggle, such as the Sharpeville massacre of 1960, the Rivonia Trial in 1963 and 1964 and the Soweto Uprising of 1976.[6] Today, the Apartheid Museum stands testament to these struggles in Johannesburg.[6]

The Johannesburg City Hall, home of the Gauteng Provincial Legislature

Gauteng is governed by the Gauteng Provincial Legislature, a 73-person unicameral legislature elected by party-list proportional representation. The legislature elects one of its members as Premier of Gauteng to lead the executive, and the Premier appoints an Executive Council of up to 10 members of the legislature to serve as heads of the various government departments. The provincial government is responsible for the topics allocated to it in the national constitution, including such fields as basic education, health, housing, social services, agriculture and environmental protection.

The most recent election of the provincial legislature was held on 7 May 2014, and the African National Congress (ANC) won 53.59% of the vote and a 40-seat majority in the legislature. The official opposition is the Democratic Alliance, which won 30.78% of the vote and 23 seats. Other parties represented are the Economic Freedom Fighters with eight seats and the Freedom Front Plus and the Inkatha Freedom Party with one seat each. Premier David Makhura of the ANC was elected on 21 May 2014, at the first meeting of the legislature after the general election.

The Gauteng Division of the High Court of South Africa, which has seats in Pretoria and Johannesburg, is a superior court with general jurisdiction over the province. Johannesburg is also home to the Constitutional Court, South Africa's highest court, and to a branch of the Labour Court and Labour Appeal Court.

The undulating hills that form part of the rural areas in the province just north of Johannesburg. Although Gauteng is a heavily urbanised province much of its area extensively cultivated for agriculture.

Gauteng's southern border is the Vaal River, which separates it from the Free State.[3] It also borders on North West[3] to the west, Limpopo[3] to the north, and Mpumalanga[3] to the east. Gauteng is the only landlocked province[3] of South Africa without a foreign border. Most of Gauteng is on the Highveld, a high-altitude grassland (circa 1,500 m or 4,921 ft above sea level). Between Johannesburg and Pretoria there are low parallel ridges and undulating hills, some part of the Magaliesberg Mountains and the Witwatersrand. The north of the province is more subtropical, due to its lower altitude and is mostly dry savanna habitat.

The climate is mostly influenced by altitude. Even though the province is at a subtropical latitude, the climate is comparatively cooler, especially in Johannesburg, at 1,700 m (5,577 ft) above sea level (Pretoria is at 1,330 m or 4,364 ft). Most precipitation occurs as brief afternoon thunderstorms; however, relative humidity never becomes uncomfortable. Winters are crisp and dry with frost occurring often in the southern areas. Snow is rare, but it has occurred on some occasions in the Johannesburg metropolitan area.[8][9]

See also: List of cities and towns in Gauteng 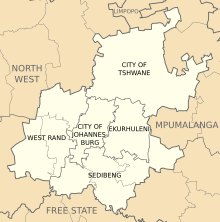 Map of the municipalities of Gauteng

The former Metsweding district consisting of Nokeng Tsa Taemane and Kungwini in the North of the province was incorporated into Tshwane in 2011. 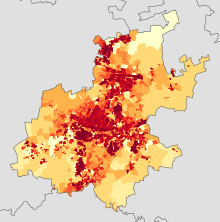 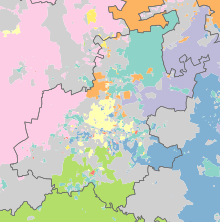 About 22.1% of all households are made up of individuals. The average household size is 3.33.

Gauteng is considered the economic hub of South Africa and contributes heavily in the financial, manufacturing, transport, technology, and telecommunications sectors, among others. It also plays host to a large number of overseas companies requiring a commercial base in and gateway to Africa.

Gauteng is home to the Johannesburg Stock Exchange,[14] the largest stock exchange in Africa. Some of the largest companies in Africa and abroad are based in Gauteng, or have offices and branches there, such as Vodacom,[15] MTN,[16] Neotel,[17] Microsoft South Africa[18] and the largest Porsche Centre in the world.[19]

Although Gauteng is the smallest of South Africa's nine provinces—it covers a mere 1.5% of the country's total land area,[4] the province is responsible for a third of South Africa's gross domestic product (GDP).[20] Gauteng generates about 10% of the total GDP of sub-Saharan Africa and about 7% of total African GDP.[21] 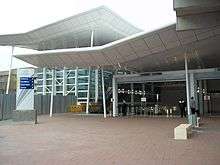 SANRAL, a parastatal, is responsible for the maintenance, development and management of all national road networks in South Africa.[22] SANRAL is responsible for instituting the Gauteng Freeway Improvement Project, which was met with a lot of opposition due to the tolling of Gauteng motorists.[23][24] Many important national roads run through Gauteng such as the N1, N3, N4, N12, N14 and the N17. Johannesburg is quite dependent on freeways for transport in and around the city. The R21, R24, R59, M1 and M2 all run through Johannesburg. The Gauteng Freeway Improvement Project led to a large decrease in traffic congestion when construction finished 2011–2012. Cape Town, for the first time in decades, is now the most congested city in South Africa.[25][26] 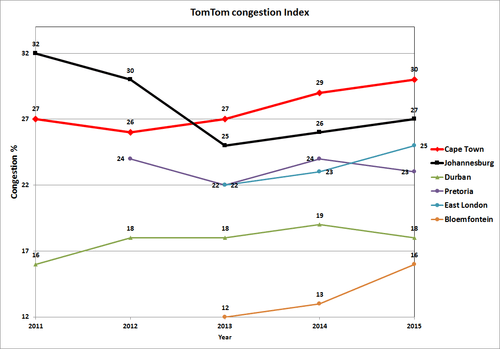 PUTCO, the largest commuter bus operator in South Africa,[27] services the Gauteng area extensively.[28] The bus rapid transit system Rea Vaya also serves to transport people from Johannesburg's southern neighbourhoods into and around the CBD.[29] In an interview, Parks Tau stated that by the year 2040, Johannesburg will be dominated by pedestrians and public transport as opposed to the use of private transport or informal transport, such as minibus taxis.[30]

Gautrain and Metrorail both service the province's public transport sector where trains are concerned[31][32] and Gautrain offers a bus service that transports commuters to and from various train stations and predetermined bus stops.[33] Metrorail trains are considered one of the most cost-effective methods of transportation in and around Gauteng.[34]

There is a large informal transport sector in Gauteng, consisting of thousands of minibus taxis, which many of the urban and rural population makes use of.[34][38] However, it is noted that taxis are often unsafe as their drivers ignore the rules of the road and the vehicles are often not roadworthy.[38] The City of Johannesburg stated that: "major initiatives are under way to completely reform the taxi industry and provide more comfort and safety to customers."[38] 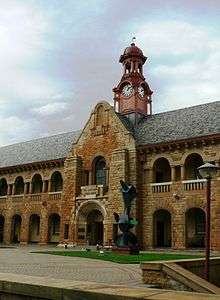 Gauteng is a large center of learning in South Africa, and it has many universities and other educational institutions of higher learning.

In the 2013 national budget speech, it was announced that the Gauteng Department of Education would be granted over R700 million to improve education and to alleviate issues concerning the overcrowding in schools, a shortage in teaching staff and transport for poor pupils.[53]

Although Gauteng province is dominated by the urban areas of Johannesburg and Pretoria, it has several nature reserves. Johannesburg is also home to the largest man-made urban forest in the world.[54][55][56]

There are 5 provincial reserves managed by the Gauteng Department of Agriculture, Conservation, Environment and Land Affairs:

Gauteng is also home to the Cradle of Humankind UNESCO World Heritage Site which includes the Sterkfontein caves and the Wonder Cave Kromdraai. 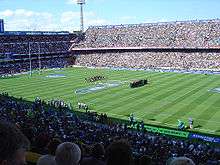 Loftus Versfeld Stadium, one of Gauteng's various stadia and venue for the 2010 FIFA World Cup

Rugby, or more accurately rugby union, is a popular sport in South Africa, and in Gauteng in particular. Two rugby teams from Gauteng participate in the Southern Hemisphere Super Rugby championship: the Pretoria-based Bulls, and the Johannesburg-based Lions (previously the Cats). Three Gauteng-based teams play in the country's domestic competition, the Currie Cup: the Blue Bulls from Pretoria, the Golden Lions from Johannesburg and the Falcons from the East Rand. In 1995, South Africa hosted the 1995 Rugby World Cup and proceeded to win the tournament at Ellis Park Stadium on 24 June 1995.[61] The events surrounding the world cup formed the basis of the story for the movie Invictus.[62]

Cricket is also widely popular among all cultural groups in the country, and is the only sport to feature in the top two among all of South Africa's major ethnic/racial groups. The Highveld Lions represent both Gauteng and North West in the country's three domestic competitions—the first-class SuperSport Series, the List A one-day MTN Domestic Championship and the Twenty20 Standard Bank Pro 20 Series.

Many marathons take place in Gauteng, such as the Gauteng Marathon, the Arwyp Medical Centre 15 km Nite Race and the Trisport Joburg City Triathlon.[64][65][66][67]

Gauteng's favourable weather conditions throughout the year make it an ideal hub for sports and other out door activities.[68] This makes golf, horse racing and swimming very popular. The Vaal River facilitates water sports in the forms of jet skiing, water skiing and motor boating.[68] Adventure sports are also quite popular in Gauteng, particularly skydiving, paragliding and hang-gliding.[68]

The Coca-Cola Dome and the Gallagher Convention Centre, which are both popular events and expos venues, are also located within Gauteng.[74][75]