The Sotho language, Sesotho (/ˈsuːtuː/;,[5] also known as Southern Sotho, or Southern Sesotho[6]) is a Southern Bantu language of the Sotho-Tswana (S.30) group, spoken primarily in South Africa, where it is one of the 11 official languages, and in Lesotho, where it is the national language.

Like all Bantu languages, Sesotho is an agglutinative language, which uses numerous affixes and derivational and inflexional rules to build complete words.

Sesotho is a Southern Bantu language, belonging to the Niger–Congo language family within the Sotho-Tswana branch of Zone S (S.30).

The Sotho-Tswana group is in turn closely related to the other Southern Bantu languages, including the Venḓa, Tsonga, Tonga, and Nguni languages, and possibly also the Makua (zone P) languages of Tanzania and Mozambique.

Sotho is a tribal suffix, i.e. the name of the Sotho people or Basotho, while Sesotho is the term for the "language of the Basotho". Use of Sesotho rather than "Sotho language" in English has seen increasing use since the 1980s, especially in South African English and in Lesotho. 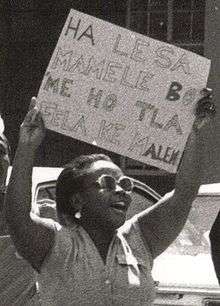 A Mosotho woman holding up a sign protesting violence against women, written in her native Sesotho language, at a National Women's Day protest at the National University of Lesotho. The sign translates as "if you do not listen to women, we will lose patience with you."

Except for faint lexical variation within Lesotho, and for marked lexical variation between the Lesotho/Free State variety and that of the large urban townships to the north (such as Soweto) due to heavy borrowing from neighbouring languages, there is no discernible dialect variation in this language.

However, one point that seems to often confuse authors who attempt to study the dialectology of Sesotho is the term Basotho, which can variously mean "Sotho–Tswana speakers," "Sesotho and Northern Sesotho speakers," "Sesotho speakers," and "residents of Lesotho." The Nguni language Phuthi has been heavily influenced by Sesotho; its speakers have mixed Nguni and Sotho–Tswana ancestry. It seems that it is sometimes treated erroneously as a dialect of Sesotho called "Sephuthi." However, Phuthi is mutually unintelligible with standard Sesotho and thus cannot in any sense be termed a dialect of it. The occasional tendency to label all minor languages spoken in Lesotho as "dialects" of Sesotho is considered patronising,[7] in addition to being linguistically inaccurate and in part serving a national myth that all citizens of Lesotho have Sesotho as their mother tongue.

Additionally, being derived from a language or dialect very closely related to modern Sesotho,[8] the Zambian Sotho–Tswana language Lozi is also sometimes cited as a modern dialect of Sesotho named Serotse or Sekololo.

The oral history of the Basotho and Northern Sotho peoples (as contained in their diboko) states that Mathulare, a daughter of the chief of the Bafokeng nation (an old and respected people), was married to chief Tabane of the (Southern) Bakgatla (a branch of the Bahurutse, who are one of the most ancient of the Sotho–Tswana tribes), and bore the founders of five tribes: Bapedi (by Mopedi), Makgolokwe (by Kgetsi), Baphuthing (by Mophuthing, and later the Mzizi of Dlamini, connected with the present-day Ndebele), Batlokwa (by Kgwadi), and Basia (by Mosia). These were the first peoples to be called "Basotho", before many of their descendants and other peoples came together to form Moshoeshoe I's nation in the early 19th century. The situation is even further complicated by various historical factors, such as members of parent clans joining their descendants or various clans calling themselves by the same names (because they honour the same legendary ancestor or have the same totem).

An often repeated story is that when the modern Basotho nation was established by King Moshoeshoe I, his own "dialect" Sekwena was chosen over two other popular variations Setlokwa and Setaung and that these two still exist as "dialects" of modern Sesotho. The inclusion of Setlokwa in this scenario is confusing, as the modern language named "Setlokwa" is a Northern Sesotho language spoken by descendants of the same Batlokwa whose attack on the young chief Moshoeshoe's settlement during Difaqane (led by the famous widow Mmanthatisi) caused them to migrate to present day Lesotho. On the other hand, Doke & Mofokeng claims that the tendency of many Sesotho speakers to say for example ke ronngwe [kʼɪʀʊŋ̩ŋʷe] instead of ke romilwe [kʼɪʀuˌmilʷe] when forming the perfect of the passive of verbs ending in -ma [mɑ] (as well as forming their perfects with -mme [m̩me] instead of -mile [mile]) is "a relic of the extinct Tlokwa dialect." 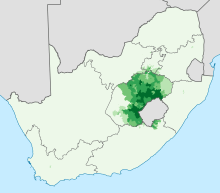 Geographical distribution of Sotho in South Africa: proportion of the population that speaks Sotho at home. 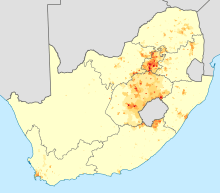 According to 2001 census data, there were almost four million first language Sesotho speakers recorded in South Africa – approximately eight per cent of the population. Sesotho is also the main language spoken by the people of Lesotho, where, according to 1993 data, it was spoken by about 1,493,000 people, or 85% of the population. The census fails, unfortunately, to record the at least five million further South Africans for whom Sesotho is a second or third language. Such speakers are found in all major residential areas of greater Johannesburg, Soweto and Tshwane, where multilingualism and polylectalism are very high.

Sesotho is one of the many languages from which the pseudo-language Tsotsitaal is derived. Tsotsitaal is not a proper language, as it is primarily a unique vocabulary and a set of idioms but used with the grammar and inflexion rules of another language (usually Sesotho or Zulu). It is a part of the youth culture in most Southern Gauteng "townships" and is the primary language used in Kwaito music.

The sound system of Sesotho is unusual in many respects. It has ejective consonants, click consonants, a uvular trill, a relatively large number of affricate consonants, no prenasalised consonants, and a rare form of vowel-height (alternatively, advanced tongue root) harmony. In total, the language contains some 39 consonantal[9] and 9 vowel phonemes.

It also has a large number of complex sound transformations which often change the phones of words due to the influence of other (sometimes invisible) sounds.

The most striking properties of Sesotho grammar, and the most important properties which reveal it as a Bantu language, are its noun gender and concord systems. The grammatical gender system does not encode sex gender, and indeed, Bantu languages in general are not grammatically marked for gender.

Another well-known property of the Bantu languages is their agglutinative morphology. Additionally, they tend to lack any grammatical case systems, indicating noun roles almost exclusively through word order.