He was born in Thiais, France. His family lived at 2 Place des Vosges in Paris in a historic 17th-century building in which he lived all his life. Dufrénoy went to school at the Oratoriens Catholic school (école Massillon, 2 quai des Célestins, Paris 4ème) from age 5 to 17. At 17, after some hesitation between the study of architecture and painting, Dufrénoy chose to become a painter.

Dufrénoy studied with Jean-Paul Laurens at the Académie Julian from 1887. In 1890 he began a period of two years as the only pupil of Désiré Laugier, from whom he learned a great deal. His early works which he started showing in 1895 were very much influenced by Impressionism.

In 1902 he made his first trip to Venice, a place he fell in love with and would return to almost every year until 1939, except during World War I. He discovered the great Venetian masters Titian, Tintoretto and Veronese. Art critic Marius-Ary Leblond wrote that his Venice works "follow in the great tradition of the Venetian Masters, he puts himself in the direct line of succession to the Italians; he remains an opulent and aristocratic Venetian in his works."

In 1905 he traveled to Italy to paint with his friend Pierre Girieud. In 1907 Marius-Ary Leblond published a very positive review of Dufrénoy's work, and ranked him among the best in his generation.

His gallerist from then on was Druet, who also supported artists such as Bonnard, Derain, Friesz, Marquet, and Vuillard. After Druet closed in 1934 his main gallerist was Katia Granoff.

On 29 January 1914 he married Marguerite de Baroncelli-Javon. She was the sister of Marquis Folco de Baroncelli-Javon and of the filmmaker Jacques de Baroncelli. Folco was a well known "manadier" who raised bulls for bullfights on his estate in Camargue and befriended Buffalo Bill. Along with Marguerite, who was queen of the Félibrige from 1906 to 1913, Folco was a friend of provençal poets Mistral and Joseph d'Arbaud. Georges and Marguerite had two daughters and two sons. 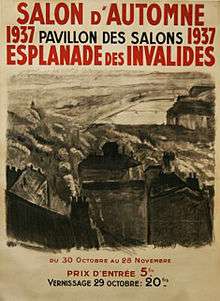 Georges fought during World War I and continued painting and selling his works successfully afterwards. He participated in shows such as the Salon des Indépendants and the Salon d'Automne. He received the Carnegie Prize in 1929 and was a member of the jury for the Prix de Rome.

The occupation of France in 1940 was a great sadness to him and he died heartbroken in Salles-en-Beaujolais in 1943.