i/ˈtuː/) is a number, numeral, and glyph. It is the natural number following 1 and preceding 3.

The number two has many properties in mathematics.[1] An integer is called even if it is divisible by 2. For integers written in a numeral system based on an even number, such as decimal and hexadecimal, divisibility by 2 is easily tested by merely looking at the last digit. If it is even, then the whole number is even. In particular, when written in the decimal system, all multiples of 2 will end in 0, 2, 4, 6, or 8. In numeral systems based on an odd number, divisibility by 2 can be tested by having a digital root that is even.

Two is the smallest and the first prime number, and the only even prime number [2] (for this reason it is sometimes called "the oddest prime").[3] The next prime is three. Two and three are the only two consecutive prime numbers. 2 is the first Sophie Germain prime, the first factorial prime, the first Lucas prime, the first Ramanujan prime,[4] and the first Smarandache-Wellin prime. It is an Eisenstein prime with no imaginary part and real part of the form 3n − 1. It is also a Stern prime,[5] a Pell number,[6] the first Fibonacci prime, and a Markov number—appearing in infinitely many solutions to the Markov Diophantine equation involving odd-indexed Pell numbers.

It is the third Fibonacci number, and the second and fourth Perrin numbers.[7]

Vulgar fractions with only 2 or 5 in the denominator do not yield infinite decimal expansions, as is the case with all other primes, because 2 and 5 are factors of ten, the decimal base.

For any number x:

Two is the only number x such that the sum of the reciprocals of the powers of x equals itself. In symbols

This comes from the fact that:

Powers of two are central to the concept of Mersenne primes, and important to computer science. Two is the first Mersenne prime exponent.

Taking the square root of a number is such a common mathematical operation, that the spot on the root sign where the exponent would normally be written for cubic roots and other such roots, is left blank for square roots, as it is considered tacit.

The square root of 2 was the first known irrational number.

The smallest field has two elements.

In the set-theoretical construction of the natural numbers, 2 is identified with the set {{∅},∅}. This latter set is important in category theory: it is a subobject classifier in the category of sets.

Two is a primorial, as well as its own factorial. Two often occurs in numerical sequences, such as the Fibonacci number sequence, but not quite as often as one does. Two is also a Motzkin number,[9] a Bell number,[10] an all-Harshad number, a meandric number, a semi-meandric number, and an open meandric number.

Two is the number of n queens problem solutions for n = 4. With one exception, all known solutions to Znám's problem start with 2.

Two also has the unique property such that

for a not equal to zero

The number of domino tilings of a 2×2 checkerboard is 2.

In n-dimensional space for any n, any two distinct points determine a line.

As of June 2015, there are only two known Wieferich primes in base 2.

With the exception of the sequence 3, 5, 7, the maximum number of consecutive odd numbers that are prime is two.

Evolution of the glyph

In fonts with text figures, 2 usually is of x-height, for example,

The number 2 is important in Judaism, with one of the earliest reference being that God ordered Noah to put two of every unclean animal (Gen. 7:2) in his ark (see Noah's Ark). Later on, the Ten Commandments were given in the form of two tablets. The number also has ceremonial importance, such as the two candles that are traditionally kindled to usher in the Shabbat, recalling the two different ways Shabbat is referred to in the two times the Ten Commandments are recorded in the Torah. These two expressions are known in Hebrew as שמור וזכור ("guard" and "remember"), as in "Guard the Shabbat day to sanctify it" (Deut. 5:12) and "Remember the Shabbat day to sanctify it" (Ex. 20:8). Two challahs (lechem mishneh) are placed on the table for each Shabbat meal and a blessing made over them, to commemorate the double portion of manna which fell in the desert every Friday to cover that day's meals and the Shabbat meals.

In Jewish law, the testimony of two witnesses are required to verify and validate events, such as marriage, divorce, and a crime that warrants capital punishment.

"Second-Day Yom Tov" (Yom Tov Sheini Shebegaliyot) is a rabbinical enactment that mandates a two-day celebration for each of the one-day Jewish festivals (i.e., the first and seventh day of Passover, the day of Shavuot, the first day of Sukkot, and the day of Shemini Atzeret) outside the Land of Israel. 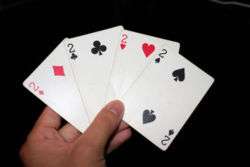 The twos of all four suits in playing cards

The most common philosophical dichotomy is perhaps the one of good and evil, but there are many others. See dualism for an overview. In Hegelian dialectic, the process of synthesis creates two perspectives from one.

The ancient Sanskrit language of India, does not only have a singular and plural form for nouns, as do many other languages, but instead has, a singular (1) form, a dual (2) form, and a plural (everything above 2) form, for all nouns, due to the significance of 2. It is viewed as important because of the anatomical significance of 2 (2 hands, 2 nostrils, 2 eyes, 2 legs, etc.)

Two (二, èr) is a good number in Chinese culture. There is a Chinese saying, "good things come in pairs". It is common to use double symbols in product brandnames, e.g. double happiness, double coin, double elephants etc. Cantonese people like the number two because it sounds the same as the word "easy" (易) in Cantonese.

In Finland, two candles are lit on Independence Day. Putting them on the windowsill invokes the symbolical meaning of division, and thus independence.

In pre-1972 Indonesian and Malay orthography, 2 was shorthand for the reduplication that forms plurals: orang "person", orang-orang or orang2 "people".

In Astrology, Taurus is the second sign of the Zodiac.

In North American educational systems, the number 2.00 denotes a grade-point average of "C", which in some colleges and universities is the minimum required for good academic standing at the undergraduate level.[12]