German Braille is one of the older braille alphabets. The French-based order of the letter assignments was largely settled on with the 1878 convention that decided the standard for international braille. However, the assignments for German letters beyond the 26 of the basic Latin alphabet are mostly unrelated to French values. 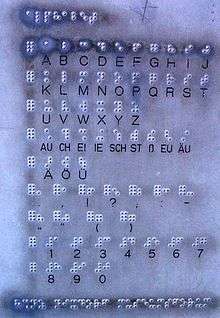 A German Braille index at the Nixdorfmuseum

In numerical order by decade, the letters are:

The generic accent sign, ⠈, is used with foreign names such as ⠨⠍⠕⠇⠊⠈⠑⠗⠑ Molière that have accented letters not found in German. There are numerous contractions and abbreviations. These can be found in the external link in the reference section.

Punctuation is as follows:

Only the first asterisk is marked with dot 6, so print *** is in braille ⠠⠔⠔⠔.

⠴ is the Artikel sign, marking an article of a document.

For the brackets of phonetic transcription, German Braille uses a modified form, ⠰⠶⠀⠰⠶.

Additional punctuation and symbols, especially mathematical, are explained in the external reference below.

Numbers are introduced with the sign ⠼. They are dropped to decade 5 for ordinals and for the denominator of fractions.

In a compound fraction, a repeat of the number sign separate the units from the fraction: ⠼⠁⠼⠁⠆ ⟨1½⟩.

The emphasis sign (for italics, underline, or bold) is marked with an extra point, ⠠⠸, when it occurs in the middle of a word. It is doubled, ⠸⠸, when more than one word is emphasized, in which case the ending sign ⠠⠄ will be required at the end of the last word.

The all-caps sign is used for initialisms and the like. Doubled, it is used for all-cap text, such as titles, and the same ending sign, ⠠⠄, is used. Names with initials, such as J.S. Bach, do not require the cap sign. The lower-case sign ⠠ is used to mark mixed case or exceptions to expected capitalization; as such, it replaces the apostrophe that sets off the plural -s in print:

(Note the initialism sign can be used for a single letter.)

Lower-case metric units are marked as lower-case: ⠠⠅⠘⠺ ⟨kW⟩. This is useful, as it ends the scope of the number sign ⠼: