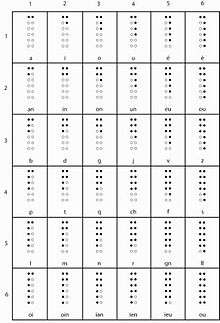 Night writing, AKA sonography, was a system of code that used symbols of twelve dots arranged as two columns of six dots embossed on a square of paperboard, and is now remembered as the forerunner of Braille. It was designed in 1808 by Charles Barbier[1] in response to Napoleon's demand for a code that soldiers could use to communicate silently and without light at night. Called sonography, each grid of dots stands for a character or phoneme.

Barbier's system was related to the Polybius square, in which a two-digit code represents a character. In Barbier's variant, a 6×6 matrix includes most of the characters of the French alphabet, as well as several digraphs and trigraphs:

As many as twelve dots (two columns of 6) would be needed to represent one symbol.

Barbier's system was found to be too difficult for soldiers to learn and was rejected by the military. In 1821, Barbier visited the National Institute for the Blind in Paris, France, where he met Louis Braille. Braille identified the major failing of the code, which was that the human finger could not encompass the whole symbol without moving and so could not move rapidly from one symbol to another.

His modification was to use a 6-dot cell, the Braille system that revolutionized written communication for the visually impaired.