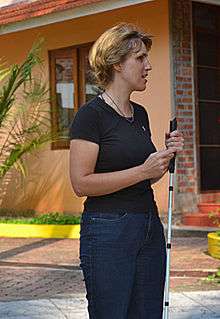 Sabriye Tenberken (born 1970) is a German socialworker and co-founder of the organisation Braille Without Borders. 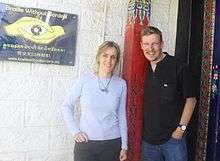 Sabriye was born in Cologne, West Germany. She lost her sight slowly as a child due to retinal disease, and her parents took her to many places so she would store up many visual memories, before becoming totally blind by the age of 13. She studied Central Asian Studies at Bonn University. In addition to Mongolian and modern Chinese, she studied modern and classical Tibetan in combination with Sociology and Philosophy.

Braille for the Tibetan language

As no blind student had ever before ventured to enroll in these kinds of studies, Sabriye could not fall back on the experience of previous students, so she developed her own methods of studying her course of study. By 1992 Sabriye had developed Tibetan Braille, which later became the official reading and writing system for the blind in Tibet. Tibetan Braille is based on international braille, modified to accommodate the Tibetan script. For example, Tibetan ka, kha, ga, nga are written with the standard Braille letters for k, c, g and lowered g. It was submitted for examination to a Tibetan scholar, who found it to be readily understandable, simple, and easy to learn.

A school for the blind

In 1997, Sabriye travelled to Tibet alone in order to assess the situation of the blind there. Returning in 1998, she founded the Centre for the Blind in Lhasa, the capital of Tibet, to educate blind people. Before that, blind children had not been able to attend school in Tibet. The school started with five children, with Sabriye initially teaching the children herself, as well as serving as coordinator and advisor. She then began training native Tibetans as teachers, selecting and supervising all staff-members of the Centre.

The project's progress was not without difficulties. Most blind children were hidden away from the world by their family members, who were reluctant to send their children to be educated. Local Tibetans would at times cheat Sabriye, taking advantage of her blindness. European foundations she turned to did not offer Sabriye help, believing that a woman who herself was blind could not be successful with such a project. Funds promised to Sabriye by a German association for the blind were never sent. Nevertheless. Sabriye persisted and was able eventually to turn over the running of the Centre to one of her former students who trained as a teacher. She found one person who believed in her and began working with her: Paul Kronenberg who had been working for the Red Cross in Shigatse.

In 1998 Paul joined Sabriye in establishing the Project for the Blind, Tibet. In September, 2002, the name was changed to Braille Without Borders, BWB. In addition to the school in Lhasa BWB runs a vocational training centre for blind adults with a farm and cheese factory near Shigatse.

In 2009, Sabriye Tenberken and her partner Paul Kronenberg also began kanthari international (name intentionally spelled with all letters in lower case) in a village near Thiruvananthapuram, India, They also established an International School for Development and Project Planning near Trivandrum, Kerala, India. The school focuses on discovering and developing the hidden talents of persons socially neglected, especially because of disabilities, empowering them to be innovators and leaders.