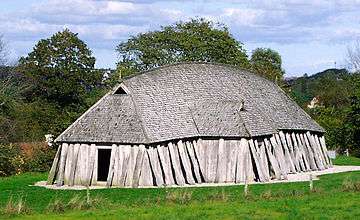 In ancient Scandinavia and Germanic Europe a mead hall or feasting hall was initially simply a large building with a single room. From the fifth century to early medieval times such a building was the residence of a lord and his retainers. The mead hall was generally the great hall of the king.

The old name of such halls may have been sal/salr and thus be present in old place names such as "Uppsala".[1] The meaning has been preserved in German Saal, Dutch zaal, Icelandic salur, Swedish, Norwegian and Danish sal, Lithuanian salė, Finnish sali, French salle, Italian/Polish/Spanish sala and Russian зал(zal), (all meaning "hall" or "large room"). In Old English, sele and sæl were used. These words are etymologically related to the modern English words salon and saloon.

From around the year 500 up until the Christianization of Scandinavia (by the 13th century), these large halls were vital parts of the political center. They were later superseded by medieval banquet halls.

Examples that have been excavated include:

The possibly related medieval longhouse types of Europe of which some examples have survived are among others: 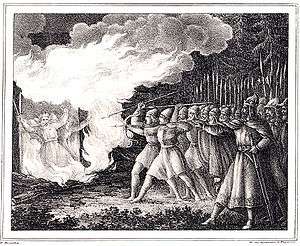 There are several accounts of large feasting halls constructed for important feasts when Scandinavian royalty was invited. According to a legend recorded by Snorri Sturluson, in the Heimskringla, the late 9th century Värmlandish chieftain Áki invited both the Norwegian king Harald Fairhair and the Swedish king Eric Eymundsson, but had the Norwegian king stay in the newly constructed and sumptuous one, because he was the youngest one of the kings and the one who had the greatest prospects. The older Swedish king, on the other hand, had to stay in the old feasting hall. The Swedish king was so humiliated that he killed Áki.

The construction of new feasting halls could also be the preparation for treacherous murders of royalty. In the Ynglinga saga part of the Heimskringla, Snorri relates how, in the 8th century, the legendary Swedish king Ingjald constructed a large feasting hall solely for the purpose of burning all his subordinate petty kings late at night when they were asleep. According to Yngvars saga víðförla, the same ruse was done by the Swedish king Eric the Victorious and the Norwegian ruler Sigurd Jarl, when they murdered Áki, a rebellious Swedish subking, at Gamla Uppsala, in the late 10th century.

From at least the tenth century onwards in Norse mythology, there are numerous examples of halls where the dead may arrive. The best known example is Valhalla, the hall where Odin receives half of the dead lost in battle. Freyja, in turn, receives the other half at Sessrúmnir.

The story of Beowulf includes a Mead-Hall called Heorot that was so big and had so much attendant laughter that the monster Grendel broke in and slaughtered the noisemakers.

In fiction, mead halls usually appear in works that take place during the Middle Ages.