The languages of China are the languages that are spoken by China's 56 recognized ethnic groups. The predominant language in China, which is divided into seven major dialect groups, is known as Hanyu (simplified Chinese: 汉语; traditional Chinese: 漢語; pinyin: Hànyǔ). and its study is considered a distinct academic discipline in China.[4] Hanyu, or Han language, spans eight primary dialect groups, that differ from each other morphologically and phonetically to such a degree that dialects from different regions can often be mutually unintelligible. The languages most studied and supported by the state include Chinese, Mongolian, Tibetan, Uyghur and Zhuang. China has 297 living languages according to Ethnologue.[5]

Standard Chinese (known in China as Putonghua), a form of Mandarin Chinese, is the official national spoken language for the mainland and serves as a lingua franca within the Mandarin-speaking regions (and, to a lesser extent, across the other regions of mainland China). Several other autonomous regions have additional official languages. For example, Tibetan has official status within the Tibet Autonomous Region, and Mongolian has official status within Inner Mongolia. Language laws of China do not apply to either Hong Kong or Macau, which have different official languages (Cantonese, English and Portuguese) than the mainland.

The spoken languages of nationalities that are a part of the People's Republic of China belong to at least nine families:

Below are lists of ethnic groups in China by linguistic classification. Ethnicities not on the official PRC list of 56 ethnic groups are italicized. Respective Pinyin transliterations and simplified Chinese characters are also given. 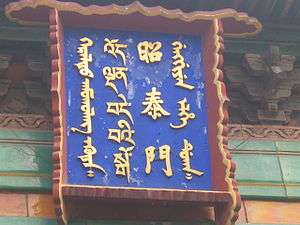 A sign in Mongolian, Tibetan, Chinese and Manchu at the Yonghe monastery in Beijing

The following languages traditionally had written forms that do not involve Chinese characters (hanzi):

Many modern forms of spoken Chinese languages have their own distinct writing system using Chinese characters that contain colloquial variants. These typically are used as sound characters to help determine the pronunciation of the sentence within that language:

Some formerly have used Chinese characters

During Qing dynasty, palaces, temples, and coins have sometimes been inscribed in four scripts:

During the Mongol Yuan dynasty, the official writing system was:

The reverse of a one jiao note with Chinese (Pinyin) at the top and Mongolian, Tibetan, Uyghur, and Zhuang along the bottom.

Chinese banknotes contain several scripts in addition to Chinese script. These are:

Other writing system for Chinese languages in China include:

Ten nationalities who never had a written system have, under the PRC's encouragement, developed phonetic alphabets. According to a government white paper published in early 2005, "by the end of 2003, 22 ethnic minorities in China used 28 written languages."

The Chinese language policy in mainland China is heavily influenced by the Soviet nationalities policy and officially encourages the development of standard spoken and written languages for each of the nationalities of China. However, in this schema, Han Chinese are considered a single nationality and the official policy of the People's Republic of China (PRC) treats the different varieties of Chinese differently from the different national languages, even though their differences are as significant as those between the various Romance languages of Europe. While official policies in mainland China encourage the development and use of different orthographies for the national languages and their use in educational and academic settings, realistically speaking it would seem that, as elsewhere in the world, the outlook for minority languages perceived as inferior is grim.[7] The Tibetan Government-in-Exile argue that social pressures and political efforts result in a policy of sinicization and feels that Beijing should promote the Tibetan language more. Because many languages exist in China, they also have problems regarding diglossia. Recently, in terms of Fishman's typology of the relationships between bilingualism and diglossia and his taxonomy of diglossia (Fishman 1978, 1980) in China: more and more minority communities have been evolving from "diglossia without bilingualism" to "bilingualism without diglossia." This could be an implication of mainland China's power expanding.[8]

It is also considered increasingly prestigious and useful to have some ability in English, which is a required subject for persons attending university. During the 1950s and 1960s, Russian had some social status among elites in mainland China as the international language of socialism. Japanese is the second most-studied foreign language in China.

In the late 1960s, English replaced the position of Russian to become the most important foreign language in China. After the Reform and Opening-up policy in 1988, English is taught in the public schools starting in the third year of primary school,[2][3] languages other than English are now considered to be "minor languages" (小语种 ; Traditional Chinese:小語種 xiǎo yǔzhǒng) and are only really studied at the university level apart from some special schools which are called Foreign Language Schools in some well-developed cities. Japanese and Korean are not considered as "minor languages" by most of the Chinese people. Russian, French, and German are widely taught in Universities and colleges nowadays.

In Northeast China, there are many bilingual schools (Mandarin-Japanese; Mandarin-Korean; Mandarin-Russian), in these schools, students learn other languages other than English.

The Economist, issue April 12, 2006, reported that up to one fifth of the population is learning English. Gordon Brown, the former British Prime Minister, estimated that the total English-speaking population in China will outnumber the native speakers in the rest of the world in two decades.[9]

Literary Arabic education was promoted in Islamic schools by the Kuomintang when it ruled mainland China.[11]

Portuguese is taught in Macau as one of the official languages there and as a center of learning of the language in the region, although use has declined drastically since its transfer from Portugal to the PRC.