Zwischbergen is a municipality in the district of Brig in the canton of Valais in Switzerland. 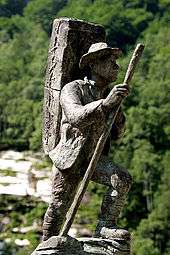 The village of Gondo, which is part of Zwischenbergen, is located at the southern foot of the Simplon Pass on the Italian border. Although the majority language has been German for a long time, the population is partly of Italian descent. Gondo belonged to the dominion of Novara, until Boniface de Challant, the Bishop of Sion, bought the rights to the village in 1291 from Count de Castello. However, the parish of Gondo first belonged to the diocese of Sion in 1822. For much of the history of the village a school was held in the rectory, but in 1958 a schoolhouse was built.[3]

A new church was built in 1495 in the village. Disagreements over appointing the administrators of the new church in the middle of the 15th Century led to the creation of a municipal corporation and municipal statutes.[3]

Some of the families in Simplon and Gondo became wealthy through freight transport and smuggling over the pass. With their wealth, they became an important part in the political landscape of Valais. Between 1550 and 1897 there were gold mines in the valley. Starting in 1640 a postal riders between Lyon and Milan stopped in Gondo.[3]

In the 18th and 19th Centuries the village was hit by devastating avalanches. On 14 October 2000, a third of the village was destroyed by a landslide that claimed 13 lives and destroyed eight buildings, including the western part of the Stockalper tower, which was built in 1650.[3] 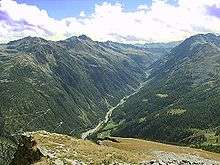 The village of Gondo, on the Simplon Pass road, is located in the municipality.

The blazon of the municipal coat of arms is Per fess Argent, between two Peaks Vert in chief a Sun Or, and Vert a Path Argent. Since zwischenbergen means between mountains, the two mountains on the coat of arms are an example of canting arms.[5]

The historical population is given in the following chart:[10]

The Ruin of the Gold Mine at Gondo is listed as a Swiss heritage site of national significance.[11] 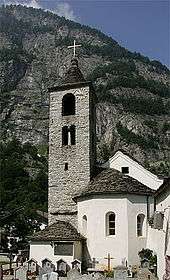 In Zwischbergen about 31 or (39.7%) of the population have completed non-mandatory upper secondary education, and two or (2.6%) have completed traditional higher education (either university or a Fachhochschule). Of these two, one was a Swiss man, the other was a Swiss woman.[7]

As of 2000, there were 3 students from Zwischbergen who attended schools outside the municipality.[16]