pronunciation  (9 May 1866 – 19 February 1915) was one of the social and political leaders during the Indian Independence Movement against the British Empire in India. Gokhale was a senior leader of the Indian National Congress and founder of the Servants of India Society. Through the Society as well as the Congress and other legislative bodies he served in, Gokhale campaigned for Indian self-rule and also social reform. He was the leader of the moderate faction of the Congress party that advocated reforms by working with existing government institutions.

Gopal Krishna Gokhale was born on 9 May 1866 in Kothluk village of Guhagar taluka in Ratnagiri district, in present-day Maharashtra (then part of the Bombay Presidency) in a Chitpavan Brahmin Family. Despite being relatively poor, his family members ensured that Gokhale received an English education, which would place Gokhale in a position to obtain employment as a clerk or minor official in the British Raj. Being one of the first generations of Indians to receive a university education, Gokhale graduated from Elphinstone College in 1884. Gokhale's education tremendously influenced the course of his future career – in addition to learning English, he was exposed to western political thought and became a great admirer of theorists such as John Stuart Mill and Edmund Burke.[1] Although he would come to criticise unhesitatingly many aspects of the English colonial regime, the respect for English political theory and institutions that Gokhale acquired in his college years would remain with him for the rest of his life.

Gokhale became a member of the Indian National Congress in 1889, as a protégé of social reformer Mahadev Govind Ranade. Along with other contemporary leaders like Bal Gangadhar Tilak, Dadabhai Naoroji, Bipin Chandra Pal, Lala Lajpat Rai and Annie Besant, Gokhale fought for decades to obtain greater political representation and power over public affairs for common Indians. He was moderate in his views and attitudes, and sought to petition the British authorities by cultivating a process of dialogue and discussion which would yield greater British respect for Indian rights. Gokhale had visited Ireland[2] and had arranged for an Irish nationalist, Alfred Webb, to serve as President of the Indian National Congress in 1894. The following year, Gokhale became the Congress's joint secretary along with Tilak. In many ways, Tilak and Gokhale's early careers paralleled – both were Chitpavan Brahmin, both attended Elphinstone College, both became mathematics professors, and both were important members of the Deccan Education Society. When both became active in the Congress, however, the divergence of their views concerning how best to improve the lives of Indians became increasingly apparent.[3]

Gokhale’s first major confrontation with Tilak centred around one of his pet issues, the Age of Consent Bill introduced by the British Imperial Government, in 1891–92. Gokhale and his fellow liberal reformers, wishing to purge what they saw as superstitions and abuses in their native Hinduism, supported the Consent Bill to curb child marriage abuses. Though the Bill was not extreme, only raising the age of consent from ten to twelve, Tilak took issue with it; he did not object per se to the idea of moving towards the elimination of child marriage, but rather to the idea of British interference with Hindu tradition. For Tilak, such reform movements were not to be sought under imperial rule when they would be enforced by the British, but rather after independence was achieved, when Indians would enforce it on themselves. The bill however became law in the Bombay Presidency.[4] The two leaders also vied for the control of the Poona Sarvajanik Sabha, and the founding of the Deccan Sabha by Gokhale in 1896 was the consequence of Tilak coming out ahead.[5] In 1905, Gokhale became president of the Indian National Congress. Gokhale used his now considerable influence to undermine his longtime rival, Tilak, refusing to support Tilak as candidate for president of the Congress in 1906. By now, Congress was split: Gokhale and Tilak were the respective leaders of the moderates and the "extremists" (the latter now known by the term, "aggressive nationalists") in the Congress. Tilak was an advocate of civil agitation and direct revolution to overthrow the British Empire, whereas Gokhale was a moderate reformist. As a result, the Congress Party split into two wings and was largely robbed of its effectiveness for a decade. The two sides would later patch up in 1916 after Gokhale died. 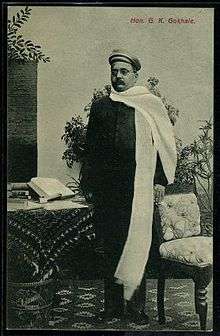 In 1905, when Gokhale was elected president of the Indian National Congress and was at the height of his political power, he founded the Servants of India Society to specifically further one of the causes dearest to his heart: the expansion of Indian education. For Gokhale, true political change in India would only be possible when a new generation of Indians became educated as to their civil and patriotic duty to their country and to each other. Believing existing educational institutions and the Indian Civil Service did not do enough to provide Indians with opportunities to gain this political education, Gokhale hoped the Servants of India Society would fill this need. In his preamble to the SIS's constitution, Gokhale wrote that "The Servants of India Society will train men prepared to devote their lives to the cause of country in a religious spirit, and will seek to promote, by all constitutional means, the national interests of the Indian people."[6] The Society took up the cause of promoting Indian education in earnest, and among its many projects organised mobile libraries, founded schools, and provided night classes for factory workers.[7] Although the Society lost much of its vigor following Gokhale’s death, it still exists to this day, though its membership is small.

Gokhale, though an earlier leader of the Indian nationalist movement, was not primarily concerned with independence but rather with social reform; he believed such reform would be best achieved by working within existing British government institutions, a position which earned him the enmity of more aggressive nationalists such as Tilak. Undeterred by such opposition, Gokhale would work directly with the British throughout his political career to further his reform goals.

In 1899, Gokhale was elected to the Bombay Legislative Council. He was elected to the Imperial Council of the Governor-General of India on 20 December 1901 [8] , and again on 22 May 1903 as non-officiating member representing Bombay Province.[9] He later served in the Imperial Legislative Council after its expansion in 1909. He there obtained a reputation as extremely knowledgeable and contributed significantly to the annual budget debates. Gokhale developed so great a reputation among the British that he was invited to London to meet with secretary of state Lord John Morley, with whom he established a rapport. Gokhale would help during his visit to shape the Morley-Minto Reforms introduced in 1909. Gokhale was appointed a CIE (Companion of the Order of the Indian Empire) in the 1904 New Year's Honours List, a formal recognition by the Empire of his service.

Mentor to both Jinnah and Gandhi

Gokhale was famously a mentor to Mahatma Gandhi in his formative years. In 1912, Gokhale visited South Africa at Gandhi's invitation. As a young barrister, Gandhi returned from his struggles against the Empire in South Africa and received personal guidance from Gokhale, including a knowledge and understanding of India and the issues confronting common Indians. By 1920, Gandhi emerged as the leader of the Indian Independence Movement. In his autobiography, Gandhi calls Gokhale his mentor and guide. Gandhi also recognised Gokhale as an admirable leader and master politician, describing him as pure as crystal, gentle as a lamb, brave as a lion and chivalrous to a fault and the most perfect man in the political field.[10] Despite his deep respect for Gokhale, however, Gandhi would reject Gokhale's faith in western institutions as a means of achieving political reform and ultimately chose not to become a member of Gokhale's Servants of India Society.[11] Gokhale was also the role model and mentor of Mohammed Ali Jinnah, the future founder of Pakistan, who in 1912, aspired to become the "Muslim Gokhale". After the Lucknow pact of 1915 between the Indian National Congress and the Muslim League, Sarojini Naidu called Jinnah the greatest ambassador of 'Hindu-Muslim Unity". Even the Aga Khan (the Spiritual Head of the Islamic sect of Ismaili Khojas & grandfather of the present Aga Khan) has stated in his autobiography that Gokhale's influence on his thinking was probably considerable.

Gokhale continued to be politically active through the last years of his life. This included extensive travelling abroad: in addition to his 1908 trip to England, he also visited South Africa in 1912, where his protégé Gandhi was working to improve conditions for the Indian minority living there. Meanwhile, he continued to be involved in the Servants of India Society, the Congress, and the Legislative Council while constantly advocating the advancement of Indian education. All these stresses took their toll, and Gokhale died on 19 February 1915 at an early age of forty-nine. Bal Gangadhar Tilak, his lifelong political opponent, said at his funeral: "This diamond of India, this jewel of Maharashtra, this prince of workers is taking eternal rest on funeral ground. Look at him and try to emulate him".

Unfortunately, not much has been written about Gokhale's marital life. He was married twice; his first marriage took place in 1880 when he was in his teens to Savitribai, who suffered from an incurable ailment. He married a second time in 1887 while Savitribai was still alive. His second wife died after giving birth to two daughters in 1899. Gokhale did not marry again and his children were looked after by his relations[12] [13]

One of his daughters, Kashi (Anandibai), was married to Justice S.B. Dhavle ICS. She also had three children, whose names were: Gopal Shankar Dhavle, Balwant Shankar Dhavle IAS and Meena Rajwade. Out of these three children, two of them had children. Balwant Shankar Dhavle and Nalini Dhavle (née Sathe) have three children: Shridhar Balwant Dhavle FCA, Vidyadhar Balwant Dhavle IFS and Jyotsna Balwant Dhavle. Vidyadhar Balwant Dhavle and Aabha Dixit have two sons Abhishek Vidyadhar Dhavle and Jaidev Vidyadhar Dhavle, who are the most recent direct descendants of Gopal Krishna Gokhale. The ancestral house was constructed by Gopal Krishna Gokhale for his family in Pune, and it continues to be the residence of the Gokhale-Dhavle descendants to this day. Also, the native village of G.K Gokhale, Tamhanmala, a remote village in Ratnagiri, has his paternal house even today. It is only 25 km from Chiplun, Ratnagiri. Other paternal relatives of Gokhale still reside at the same.

Gokhale's impact on the course of the Indian nationalist movement was very considerable. Through his close relationship with the highest levels of British imperial government, Gokhale forced India's colonial rulers to recognise the capabilities of a new generation of educated Indians and to include them more than ever before in the governing process. Gokhale’s firm belief in the need for universal education deeply inspired the next great man on the Indian political stage, Mohandas K. Gandhi; his faith in western political institutions, though rejected by Gandhi, was adopted by an independent India in 1950. 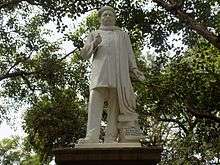 The year 2015-16 is to be celebrated as the year of 150th birth anniversary of Gokhale.