Sarojini Naidu (born as Sarojini Chattopadhyay) also known by the sobriquet as The Nightingale of India,[2] was an Indian independence activist and poet. Naidu served as the first governor of the United Provinces of Agra and Oudh from 1947 to 1949;[3] the first woman to become the governor of an Indian state.[4] She was the second woman to become the president of the Indian National Congress in 1925 and the first Indian woman to do so.[5][6]

Sarojini Naidu was born in Hyderabad to Aghore Nath Chattopadhyay and Barada Sundari Devi on 13 February 1879. Her parental home was at Brahmangaon in Bikrampur (in present-day Bangladesh).[7] Her father, Aghor Nath Chattopadhyaya, with a doctorate of Science from Edinburgh University, settled in Hyderabad, where he founded and administered Hyderabad College, which later became the Nizam's College in Hyderabad. Her mother, Barada Sundari Devi, was a poet and used to write poetry in Bengali.

She was the eldest among the eight siblings. Her brother Virendranath Chattopadhyaya was a revolutionary and her other brother, Harindranath was a poet, a dramatist, and an actor.[8]

Naidu, having passed her matriculation examination from the University of Madras, took a four-year break from her studies. In 1895, the Nizam Scholarship Trust founded by the 6th Nizam, Mir Mahbub Ali Khan, gave her the chance to study in England, first at King's College London and later at Girton College, Cambridge.

Naidu met Govindarajulu Naidu, a physician, and at the age of 19, after finishing her studies, she married him. At that time, Inter-caste marriages were not allowed, but her father approved the marriage.[8]

The couple had five children. Her daughter, Padmaja, became the Governor of West Bengal. Padmaja was a part of the Quit India Movement. 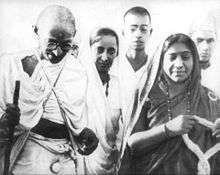 During 1915–1918, she travelled to different regions in India delivering lectures on social welfare, women's empowerment and nationalism. She also helped to establish the Women's Indian Association (WIA) in 1917.[9] She was sent to London along with Annie Besant, President of WIA, to present the case for the women's vote to the Joint Select Committee.

In 1925, Naidu presided over the annual session of Indian National Congress at Cawnpore (now Kanpur).

In 1929, she presided over East African Indian Congress in South Africa. She was awarded the Kaisar-i-Hind Medal by the British government for her work during the plague epidemic in India.[10]

In 1930 during the salt satyagraha, she was one of the women protesters at the Dharsana salt works, Gujarat. Hundreds of satyagrahis were beaten by soldiers under British command at Dharasana. The ensuing publicity attracted world attention to the Indian independence movement and brought into question the legitimacy of British rule in India.

In 1931, she participated in the Round table conference with Gandhi and Madan Mohan Malaviya.[11]

She played a leading role during the Civil Disobedience Movement and was jailed along with Gandhi and other leaders. In 1942, she was arrested during the "Quit India" movement.

Sarojini Naidu began writing at the age of twelve. Her Persian play, Maher Muneer, impressed the Nawab of Hyderabad.

In 1905, her first collection of poems, named "The Golden Threshold" was published.[12] Her poems were admired by many prominent Indian politicians like Gopal Krishna Gokhale.

Her collection of poems entitled "The Feather of The Dawn" was edited and published posthumously in 1961 by her daughter Padmaja.[13] 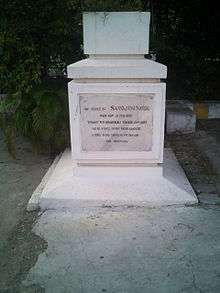 The ashes of Sarojini Naidu kept at Golden Threshold, Hyderabad before immersion

Sarojini Naidu died of a heart attack while working in her office in Lucknow on 2 March (Wednesday), 1949.[14]

Aldous Huxley wrote "It has been our good fortune, while in Bombay, to meet Mrs. Sarojini Naidu, the newly elected President of the All-India Congress and a woman who combines in the most remarkable way great intellectual power with charm, sweetness with courageous energy, a wide culture with originality, and earnestness with humor. If all Indian politicians are like Mrs. Naidu, then the country is fortunate indeed."[15] 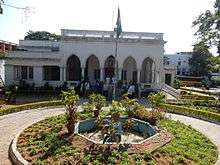 During the Chattopadhyay family's residence, it was the centre of many reformist ideas in Hyderabad, in areas ranging from marriage, education, women's empowerment, literature and nationalism.[18]

Each year links to its corresponding "year in poetry" article: