pronunciation , (28 January 1865 – 17 November 1928) was an Indian Punjabi author and politician who is chiefly remembered as a leader in the Indian Independence movement. He was popularly known as Punjab Kesari. He was part of the Lal Bal Pal tri organization.[1] He was also associated with activities of Punjab National Bank and Lakshmi Insurance Company in their early stages. He sustained serious injuries by the police when leading a non-violent protest against the Simon Commission and died less than three weeks later. His death anniversary (17 November) is one of several days celebrated as Martyrs' Day in India. 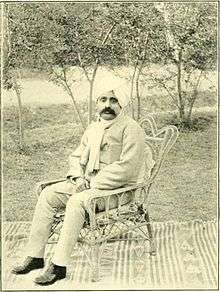 Lajpat Rai was born in Dhudike (now in Moga district, Punjab) on 28 January 1865.[2][3][4] (The word 'Lala' is an honorific, applied to prominent Hindu men of the time.) His father was in the Aggarwal caste.[5] Rai had his initial education in Government Higher Secondary School, Rewari (now in Haryana, previously in Punjab), in the late 1870s and early 1880s, where his father, Radha Krishan, was an Urdu teacher. Rai was influenced by Hinduism and created a career of reforming Indian policy through politics and writing.[6] (When studying law in Kolkata, he continued to practice Hinduism. He became a large believer in the idea that Hinduism, above nationality, was the pivotal point upon which an Indian lifestyle must be based.) Hinduism, he believed, led to practices of peace to humanity, and the idea that when nationalist ideas were added to this peaceful belief system, a secular nation could be formed. His involvement with Hindu Mahasabha leaders gathered criticism from the Bharat Sabha as the Mahasabhas were non-secular, which did not conform with the system laid out by the Indian National Congress.[7] This focus on Hindu practices in the subcontinent would ultimately lead him to the continuation of peaceful movements to create successful demonstrations for Indian independence. He was a devotee of Arya Samaj and was editor of Arya Gazette, which he set up during his student time.[8] After studying law at the Government College in Lahore, Lajpat Rai practised at Hissar and Lahore, where he helped to establish the nationalistic Dayananda Anglo-Vedic School and became a follower of Dayananda Sarasvati, the founder of the reformist Hindu society Arya Samaj ("Society of Noble People").

After joining the Indian National Congress and taking part in political agitation in the Punjab, Lajpat Rai was deported to Mandalay, Burma (now Myanmar), without trial on May 1907. In November, however, he was allowed to return when the viceroy, Lord Minto, decided that there was insufficient evidence to hold him for subversion. Lajpat Rai's supporters attempted to secure his election to the presidency of the party session at Surat on December 1907, but elements favouring co-operation with the British refused to accept him, and the party split.

Graduates of the National College, which he founded inside the Bradlaugh Hall at Lahore as an alternative to British institutions, included Bhagat Singh.[9] He was elected President of the Indian National Congress in the Calcutta Special Session of 1920.[5] In 1921, He founded Servants of the People Society, a non-profit welfare organisation, in Lahore, which shifted based to Delhi after partition, and has branches in many parts of India.[10] 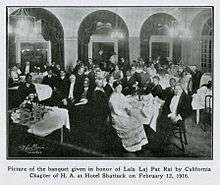 A banquet given in honour of Lala Lajpat Rai by the California Chapter of the Hindustan Association of America at Hotel Shattuck in Berkeley on 12 February 1916.

Lajpat Rai travelled to the US in 1907, and then returned during World War I. He toured Sikh communities along the US West Coast; visited Tuskegee University in Alabama; and met with workers in the Philippines. His travelogue, The United States of America (1916), details these travels and features extensive quotations from leading African American intellectuals, including W.E.B. Du Bois and Fredrick Douglass. The book also argues for the notion of "color-caste," suggesting sociological similarities between race in the US and caste in India. During World War I, Lajpat Rai lived in the United States, but he returned to India in 1919 and in the following year led the special session of the Congress Party that launched the non co-operation movement. He was imprisoned from 1921 to 1923 and elected to the legislative assembly on his release.[11]

Demand for separate state for Muslims

He controversially demanded "a clear partition of India into a Muslim India and non-Muslim India" in The Tribune on 14 December1923.[12][13] 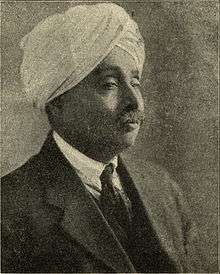 Photo of Rai printed in the February 1920 issue of Young India.

In 1928, the British government set up the Commission, headed by Sir John Simon, to report on the political situation in India. The Indian political parties boycotted the Commission, because it did not include a single Indian in its membership, and it met with country-wide protests. When the Commission visited Lahore on 30 October 1928, Lajpat Rai led silent march in protest against it. The superintendent of police, James A. Scott, ordered the police to lathi (baton) charge the protesters and personally assaulted Rai.[14] Despite being injured, Rai subsequently addressed the crowd and said, "I declare that the blows struck at me today will be the last nails in the coffin of British rule in India".[15]

He did not fully recover from his injuries and died on 17 November 1928 of a heart attack. Doctors thought that Scott's blows had hastened his death.[14] However, when the matter was raised in the British Parliament, the British Government denied any role in Rai's death.[16] Although Bhagat Singh did not witness the event,[17] he vowed to take revenge,[16] and joined other revolutionaries, Shivaram Rajguru, Sukhdev Thapar and Chandrashekhar Azad, in a plot to kill Scott.[18] However, in a case of mistaken identity, Bhagat Singh was signalled to shoot on the appearance of John P. Saunders, an Assistant Superintendent of Police. He was shot by Rajguru and Bhagat Singh while leaving the District Police Headquarters in Lahore on 17 December 1928.[19] Chanan Singh, a Head Constable who was chasing them, was fatally injured by Azad's covering fire.[20]

This case of mistaken identity did not stop Bhagat Singh and his fellow-members of the Hindustan Socialist Republican Association from claiming that retribution had been exacted.[18] 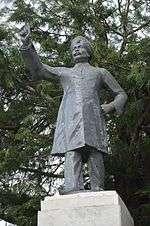 The statue of Rai at Shimla, Himachal Pradesh.

The Lala Lajpat Rai Trust was formed in 1959 on the eve of his Centenary Birth Celebration, to promote education. The trust was founded by a group of Punjabi philanthropists (including R.P Gupta and B.M Grover) who have settled and prospered in the Indian State of Maharashtra. Lala Lajpatrai College of Commerce and Economics, Mumbai is named after him. The Lala Lajpat Rai University of Veterinary & Animal Sciences, in Hisar, Haryana, is a state university was created in memory of Lajpat Rai. A statue of Lajpat Rai stands at the central square in Shimla, India (having been originally erected in Lahore and moved to Shimla in 1948). Lajpat Nagar and Lajpat Nagar Central Market in New Delhi, Lajpat Rai Market in Chandani Chowk, Delhi; Lala Lajpat Rai Hall of Residence at Indian Institutes of Technology (IIT) in Kanpur and Kharagpur; as well as the Lala Lajpat Rai Institute of Engineering and Technology, Moga are named in his honour. Also many institutes, schools and libraries in his hometown of Jagraon, district Ludhiana are named after him. The bus terminus in Jagraon, Punjab, India is named after Lala Lajpat Rai. Lala Lajpat Rai Hospital, Kanpur is also named in his honour. Further, there are several roads named after him in many metropolis and other towns of India.

Lala Lajpat Rai was also head of the "Lakshmi Insurance Company," and commissioned the Lakshmi Building in Karachi, which still bears a plaque in remembrance of him.

Lajpat Rai's mother, Gulab Devi, died of tuberculosis in Lahore. In 1927, Lajpat Rai established a trust in her memory to build and run a tuberculosis hospital for women, reportedly at the location where she had died.[21] This became known as the Gulab Devi Chest Hospital and opened on 17 July 1934.

Young India was written shortly after World War I broke out in Europe. Lajpat Rai was traveling in the United States at the time of Franz Ferdinand's assassination.[22] Rai wrote the book to exclaim his people's desire to help the British, who had been ruling in India since the mid-1700s, fight against the Germans. While the book makes the Indian people sound good, saying that they were rushing in masses to volunteer for war, one must take what Rai says with a grain of salt.[23] Rai is trying to gain American support in India against British colonialism, and the Indian people would look bad in the American public's, as well as government's, eyes if they were not willing to fight for the greater good, even on the side of Britain. Rai also makes the point to emphasize that the Indian people do not want to engage in a military conflict with Britain.[24] In Young India, Rai makes many parallels to the American fight for independence against the British, such as their common enemy (the British), their wish for self-sovereignty, and the right to bear arms as an independent nation. Rai uses Young India to convey his idea of an independent India, free from the viceroys and rule of the English Parliament. Rai wishes to have complete sovereignty from all foreign rule, but he needs to gain the support of America, his only true hope for an ally against Britain. Young India gives a first-hand account of one of the primary freedom fighters in India in the early 1900s. Rai was one of the most well-known leaders of the Nationalist, as well as Independence, Movement in India. By writing an account outlining the history of India, showing that the Indian people are better than the stereotype given by the West, willing and able to govern themselves, and attempting to gain American support against the Colonial British, Rail allows his readers to understand what is actually happening in India and why India should become an independent nation.