Kolhapur.ogg ) is a city in the Panchganga River Basin in the western Indian state of Maharashtra.[2] It is the district headquarters of Kolhapur district. Kolhapur comes under the administration of Pune division.[3] Prior to Indian Independence, Kolhapur was a nineteen gun salute, princely state ruled by the Bhosale Chhatrapati (Bhosale royal clan) of the Maratha Empire. 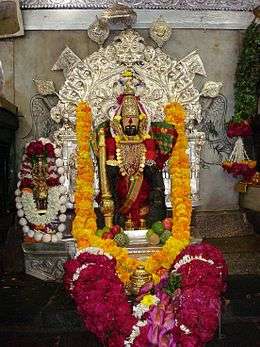 Kolhapur is mentioned in the Devi Gita, the final and key chapter of the Devi-Bhagavata Purana, a special text of Shaktism. Kolhapur is noted as a place of Kollamma worship. In the text, Devi says,

"O King of Mountains! Still I am now telling something out of My affection to My Bhaktas. Hear. There is a great place of pilgrimage named Kollapura in the southern country. Here the Devi Ambabai always dwells."[4]

The Shilahara family at Kolhapur was the latest of the three and was founded about the time of the downfall of the Rashtrakuta Empire. They ruled over southern Maharashtra; the modern districts of Satara, Kolhapur and Belgaon. Their family deity was the goddess Ambabai, whose blessing they claimed to have secured in their copperplate grants (Mahalakshmi-labdha-vara-prasada). Like their relatives of the northern branch of Konkan, the Shilaharas of Kolhapur claimed to be of the lineage of the Vidyadhara Jimutavahana. They carried the banner of golden Garuda. One of the many titles used by the Shilaharas was Tagarapuravaradhisvara, supreme sovereign ruler of Tagara.[3]

The first capital of the Shilaharas was probably at Karad during the reign of Jatiga-II as known from their copper plate grant of Miraj and 'Vikramankadevacharita' of Bilhana.[4] Hence sometimes they are referred as 'Shilaharas of Karad'. Later on although the capital was shifted to Kolhapur, some of their grants mention Valavada, and the hill fort of Pranalaka or Padmanala, (Panhala) as the places of royal residence. Even though the capital was shifted to Kolhapur, Karhad retained its significance during the Shilahara period. This branch rose to power the latter part of the Rashtrakuta rule and so, unlike the kings of the other two branches, those of this branch do not mention the genealogy of the Rashtrakutas even in their early grants. Later on they acknowledged the suzerainty of the later Chalukya for some time. They had used Kannada as the official language as can seen from their inscriptions. This branch continued to hold the Southern Maharashtra from circa 940 to 1220.

From 940 to 1212 CE, Kolhapur was the centre of power of the Shilahara dynasty.[5] An inscription at Teradal states that the king Gonka (1020 - 1050 CE) was bitten by a snake then healed by a Jain monk. Gonka then built a temple to Lord Neminath, the twenty-second Jain tirthankara (enlightened being). Jain temples in and around Kolhapur from this era are called Gonka-Jinalya, after the king.

Around 1055 CE, during the reign of Bhoja I, (Shilahara dynasty), a dynamic Acharya (spiritual guide) named Maghanandi (Kolapuriya), founded a religious institute at the Rupanarayana Jain temple (basadi). Maghanandi is also known as Siddhanta-chakravarti, that is, the great master of the scriptures. Kings and nobles of the Shilahara dynasty such as Gandaraditya I who succeeded Bhoja I, were disciples of Maghanandi.

Kolhapur was the site of intense confrontation between rulers of the Western Chalukya Empire and the rulers of the Chola empire, Rajadhiraja Chola and his younger brother Rajendra Chola II. In 1052 CE, following the Battle of Koppam, the victor, Rajendra Chola II, marched on to Kolhapur and there he erected a jayastambha (victory pillar).[6]

Between 1109 and 1178 CE, the Kopeshwar temple to Lord Shiva was built by the Shilahara kings, Gandaraditya Chola, Vijayaditya and Bhoja II in Kolhapur.

The state of Kolhapur was established by Tarabai in 1707 because of the succession dispute over the Maratha kingship. The state was annexed by the British in the 19th century. After India's independence in 1947, the Maharaja of Kolhapur acceded to the Dominion of India on 14 August 1947 and merged with Bombay State on 1 March 1949. Kolhapur is sometimes found to be spelled as Colapore[7] 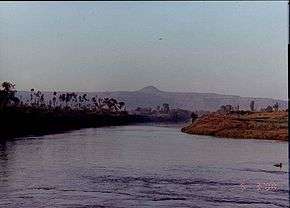 The Panchganga river at Kolhapur

Kolhapur is an inland city located in south-west Maharashtra state, 228 km south of Pune, 615 km north-west of Bengaluru and 530 km west of Hyderabad. Within Maharashtra, Kolhapur's nearest cities and towns are Ichalkaranji (27 km), Kagal (21 km), Sangli (49 km), Satara (115 km), and Miraj (50 km), Gadhinglaj(90 km). Kolhapur has an elevation of 569 metres (1867 ft). It lies in the Sahayadri mountains in the Western Ghats.[8] Chandgad is the coolest place in the Kolhapur district (citation needed). Tambraparni river dam is the spectaculus place near Umgaon village.

Kolhapur's climate is a blend of coastal and inland elements common to Maharashtra. The temperature has a relatively narrow range between 10 °C to 35 °C. Summer in Kolhapur is comparatively cooler, but much more humid, than neighbouring inland cities. Maximum temperatures rarely exceed 38 °C and typically range between 33 and 35 °C. Lows during this season are around 24 °C to 26 °C.

The city receives abundant rainfall from June to September due to its proximity to the Western Ghats. The heavy rains often lead to severe flooding during these months. 2005 and 2006 were years when floods occurred. Temperatures are low in the rainy season and range between 19 °C and 30 °C.

Kolhapur experiences winter from November to February. The winter temperatures are warmer than other cities in Maharashtra such as Pune and Nashik. Lows range from 9 °C to 16 °C while highs are in the range of 26 °C to 32 °C due to its high elevation and being adjacent to the Western Ghats. Humidity is low in this season making the weather much more pleasant.

The Panchaganga river originates in the Western Ghats. It has five tributaries which supply the city and surrounds: the Bhogavati, Tulsi, Kumbhi, Kasari and the Dhamani rivers. The Panchaganga is polluted with untreated domestic sewerage; industrial effluent; biomedical sewerage; agricultural chemical runoff; crematorium ash; and, religious offerings. Kolhapur has a number of lakes. The Rankala lake was once a stone quarry 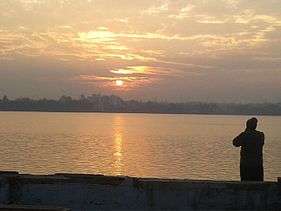 The Kalamba lake was built in 1873. These two lakes provide the city with domestic potable water.

Kolhapur is governed by the Kolhapur Municipal Corporation (KMC). The city is divided into five wards, named with the letters A to E. The corporation provides services such as sewrage treatment and free cremation for residents and has made a number of improvements, for example, the Kolhapur Road Project;[9] the Anti-Encroachment Drive to stop unwanted building activity encroaching on the city's open space; and the Suvarna Jayanti Nagarotthan Project for improvement of roads and storm water management. However KMC faces problems like expansion of civic limits of Kolhapur city which are not increased from 1972,due to the same this city fails to avail the benefits of various government schemes . 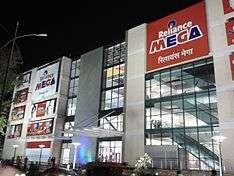 Kolhapur is also an industrial city with approximately 300 foundries producing exports with a value of 15 billion rupees per year.[17] A manufacturing plant of Kirloskar Oil Engines [KOEL] is set up in 5 star MIDC at Kagal near Kolhapur, besides this Raymond clothes plant is also located in the same industrial area. Besides this Kolhapur has two more industrial areas wiz. Gokul-Shirgaon MIDC, Shiroli MIDC & Udyamnagar is an industrial area in the city

Tourism is another source of revenue with about three million visitors to the city per year.[18] Kolhapur's attractions include: an 85 feet (26 m) idol of the Lord Ganesh at the Chinmaya mission (Top-Sambhapur); the Tara Rani equestrian statue which stands on two of the horse's legs; and a bronze statue of Babasaheb Ambedkar at Bindu chowk, inaugurated on 7 December 1950. At the annual Dusshera procession, the Kolhapur Maybach car of the chhatrapatis of Kolhapur is displayed to the public.

In 1929, the Maharashtra Film Company was established in Kolhapur by Baburao Painter. The city has become the primary centre for the Marathi film industry. Kolhapur plays host to many film festivals, including the Kolhapur International Film Festival. In 2012, the chief minister of Maharashtra announced a new film city at Kolhapur.[19]

Besides this city has numoreous Hyper markets like Big Bazzar, Star Bazzar, 2 stores of D Mart,Reliance Mega & DYP city is are shopping malls in the city.

Kolhapur cuisine is noted for special mutton dishes as well as Kolhapuri Misal And Kolhapuri Bhel.[20] The city lends its name to food products such as Kolhapuri Lavangi (chili peppers or Mirchi), Kolhapuri jaggery (cane juice concentrate), and Kolhapuri masala (spice mixture). Pandhara rassa, meaning white curry, is a soup like dish made from mutton stock, spices such as cinnamon, coriander, ginger and garlic, and coconut milk. It is used as a starter and also has medicinal uses for cough and throat ailments.[21] Similarly Kolhapur has two outlets of McDonald's, Dominos pizza, Pizza Hut, Subway & KFC. Numerous cafes are spread throughout the city .

A number of sports are played in Kolhapur. Wrestling is most played sports in the city.[23] Football is famous well as I-League teams like Mumbai. Mumbai FC, ONGC FC, Air India FC.

In January 2013, the Indian women's football team hosted a training camp and played a demonstration game against representatives from the Netherlands in Kolhapur.[24] There is also a tradition of wrestling in Kolhapur.[23] 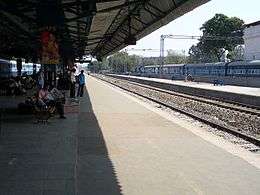 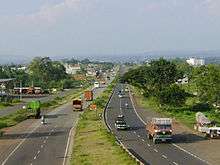 National Highway 4 near the city

Kolhapur's domestic airport is located 9 kilometres (5.6 mi) south east of the city at Ujalaiwadi. In August 2013, the Airports Authority of India took control of the airport.[25]

Kolhapur has educational institutions for engineering, medicine, and agriculture. Shivaji University is located in Kolhapur city. There are international schools and a pre-IAS training centres. The city attracts students form all over India & Africa.