Gubbio is a town and comune in the far northeastern part of the Italian province of Perugia (Umbria). It is located on the lowest slope of Mt. Ingino, a small mountain of the Apennines.

The city's origins are very ancient. The hills above the town were already occupied in the Bronze Age.[2] As Ikuvium, it was an important town of the ancient Umbrian people in pre-Roman times, made famous for the discovery there of the Eugubine (or Iguvine) Tables in 1444,[3] a set of bronze tablets that together constitute the largest surviving text in ancient Umbrian. After the Roman conquest in the 2nd century BC — it kept its name as Iguvium — the city remained important, as attested by its Roman theatre, the second-largest surviving in the world.

Gubbio became very powerful in the beginning of the Middle Ages. The town sent 1000 knights to fight in the First Crusade under the lead of count Girolamo Gabrielli, and according to an undocumented local tradition, they were the first to penetrate into the Holy Sepulchre when the city was seized (1099).

The following centuries were quite turbulent, and Gubbio was engaged in wars against the surrounding towns of Umbria. One of these wars saw the miraculous intervention of its bishop, St. Ubaldo Baldassini, who secured Gubbio an overwhelming victory (1151) and a period of prosperity. In the struggles of Guelphs and Ghibellines, the Gabrielli, such as the condottiero Cante de' Gabrielli da Gubbio (c. 1260 - 1335), were of the Guelph faction, supportive of the papacy; as Podestà of Florence, Cante exiled Dante Alighieri, ensuring his own lasting notoriety. 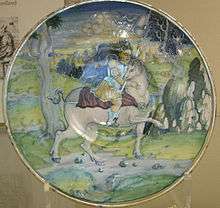 Gubbio maiolica by Giorgio Andreoli, famous for its "lustro" (reflections), 1525

In 1350 Giovanni Gabrielli, count of Borgovalle, a member of the most prominent noble family of Gubbio, seized communal power and became lord of Gubbio. However his rule was short, and he was forced to hand over the town to Cardinal Albornoz, representing the Church (1354).

A few years later, Gabriello Gabrielli, bishop of Gubbio, proclaimed himself again lord of Gubbio (Signor d’Agobbio). Betrayed by a group of noblemen which included many of his relatives, the bishop was forced to leave the town and seek refuge at his home castle at Cantiano.

With the decline of the political prestige of the Gabrielli family, Gubbio was thereafter incorporated into the territories of the Montefeltro. Federico da Montefeltro rebuilt the ancient Palazzo Ducale, incorporating in it a studiolo veneered with intarsia like his studiolo at Urbino.[4] The maiolica industry at Gubbio reached its apogee in the first half of the 16th century, with metallic lustre glazes imitating gold and copper.

A "porta dei morti" that has been turned into a window. 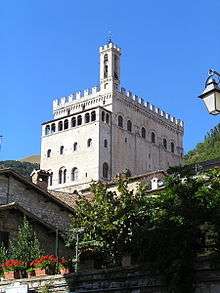 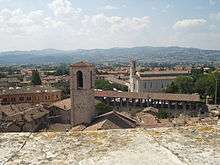 Sunlight streams through the rose window of Piazza S. Giovanni. 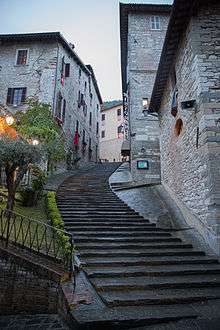 Stairs in the historic town.

The historical centre of Gubbio has a decidedly medieval aspect: the town is austere in appearance because of the dark grey stone, narrow streets, and Gothic architecture. Many houses in central Gubbio date to the 14th and 15th centuries, and were originally the dwellings of wealthy merchants. They often have a second door fronting on the street, usually just a few inches from the main entrance. This secondary entrance is narrower, and a foot or so above the actual street level. This type of door is called a porta dei morti (door of the dead) because it was proposed that they were used to remove the bodies of any who might have died inside the house. This is almost certainly false, but there is no agreement as to the purpose of the secondary doors. A more likely theory is that the door was used by the owners to protect themselves when opening to unknown persons, leaving them in a dominating position.

Among most visited buildings and sites in the city are: 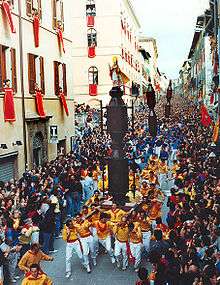 Gubbio is home to the Corsa dei Ceri, a run held every year always on the 15th day of May, in which three teams, devoted to St. Ubaldo (the patron saint of Gubbio), S. Giorgio, and S. Antonio, run through throngs of cheering supporters (clad in the distinctive colours of yellow, blue and black, with white trousers and red belts and neckbands), up much of the mountain from the main square in front of the Palazzo dei Consoli to the basilica of St. Ubaldo, each team carrying a statue of their saint mounted on a wooden octagonal prism, similar to an hour-glass shape 4 metres tall and weighing about 280 kg (617 lb).

The race has strong devotional, civic, and historical overtones and is one of the best-known folklore manifestations in Italy; the Ceri were chosen as the heraldic emblem on the coat of arms of Umbria as a modern administrative region.

A celebration like the Corsa dei Ceri is held also in Jessup, Pennsylvania. In this small town the people carry out the same festivities as the residents of Gubbio do by "racing" the three statues through the streets during the Memorial Day weekend. This remains an important and sacred event in both towns.

Gubbio was also one of the centres of production of the Italian pottery (maiolica), during the Renaissance. The most important Italian potter of that period, Mastro Giorgio, was active in Gubbio during the early 16th century.

The city is the setting for the popular story of St. Francis and the Wolf of Gubbio, recorded in the medieval Fioretti di San Francesco.

Gubbio is also known among geologists and palaeontologists as the discovery place of what was at first called the "Gubbio layer", a sedimentary layer enriched in iridium that was exposed by a roadcut outside of town. This thin, dark band of sediment marks the Cretaceous–Paleogene boundary, also known as the K–T boundary or K–Pg boundary, between the Cretaceous and Paleogene geological periods about 66 million years ago, and was formed by infalling debris from the gigantic meteor impact responsible for the mass extinction of the dinosaurs. Its iridium, a heavy metal rare on Earth's surface, is plentiful in extraterrestrial material such as comets and asteroids. It also contains small globules of glassy material called tektites, formed in the initial impact. Discovered at Gubbio, the Cretaceous–Paleogene boundary is also visible at many places all over the world. The characteristics of this boundary layer support the theory that a devastating meteorite impact, with accompanying ecological and climatic disturbance, was directly responsible for the Cretaceous–Paleogene extinction event. 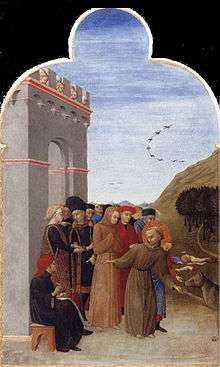 Saint Francis with the wolf of Gubbio, panel by Sassetta.

One of the town's most celebrated citizens is the wolf of Gubbio, who was tamed by St. Francis of Assisi and whose legend is related in the 14th-century Fioretti.

In Hermann Hesse's novel Steppenwolf (1927) the isolated and tormented protagonist- a namesake of the wolf- consoles himself at one point by recalling a scene that the author might have beheld during his travels: "(...) That slender cypress on the hill over Gubbio that, though split and riven by a fall of stone, yet held fast to life and put forth with its last resources a new sparse tuft at the top".[6]

The town is a backdrop in Antal Szerb's novel Journey by Moonlight (1937) as well as Danièle Sallenave's fr:Les Portes de Gubbio (1980).

Starting in 2000 the TV series Don Matteo has been shot on location in Gubbio, where the title character ministers to his parish while solving crimes.

Anna Moroni, a popular cook on the Italian daytime TV series "La Prova del Cuoco" discusses Gubbio in many of her TV segments. She often cooks dishes from the region on TV, and she featured Gubbio in her first book.

Gubbio is twinned with: