This article is about the form of wood inlaying. For the knitting technique, see Intarsia (knitting). 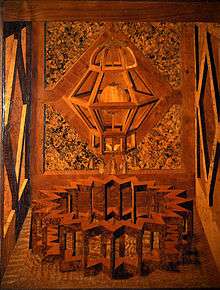 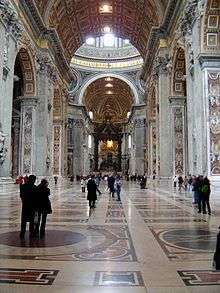 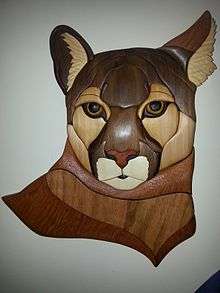 Intarsia is a form of wood inlaying that is similar to marquetry. The start of the practice dates before the seventh century.

The technique of intarsia inlays sections of wood (at times with contrasting ivory or bone, or mother-of-pearl) within the solid stone matrix of floors and walls or of table tops and other furniture; by contrast marquetry assembles a pattern out of veneers glued upon the carcase. It is thought that the word 'intarsia' is derived from the Latin word 'interserere' which means "to insert".

When Egypt came under Arab rule in the seventh century, indigenous arts of intarsia and wood inlay, which lent themselves to non-representational decors and tiling patterns, spread throughout the maghreb.[1] The technique of intarsia was already perfected in Islamic North Africa before it was introduced into Christian Europe through Sicily and Andalusia. The art was further developed in Siena and by Sienese masters at the cathedral of Orvieto, where figurative intarsia made their first appearance, ca 1330 and continuing into the 15th century[2] and in northern Italy in the fifteenth and sixteenth centuries, spreading to German centers and introduced into London by Flemish craftsmen in the later sixteenth century. The most elaborate examples of intarsia can be found in cabinets of this period, which were items of great luxury and prestige.[3] After about 1620, marquetry tended to supplant intarsia in urbane cabinet work.

In the 1980s, intarsia began to gain popularity in the United States as a technique for creating wooden art using a band saw or scroll saw.[4] Early practitioners made money both by selling their art, and also selling patterns used to create intarsia.[5]

Intarsia is a woodworking technique that uses varied shapes, sizes, and species of wood fitted together to create a mosaic-like picture with an illusion of depth. Intarsia is created through the selection of different types of wood, using their natural grain pattern and color (but can involve the use of stains and dyes) to create variations in the pattern. After selecting the specific woods to be used within the pattern, each piece is then individually cut, shaped, and finished. Sometimes areas of the pattern are raised to create more depth. Once the individual pieces are complete, they are fitted together like a jig-saw puzzle and glued to wood backing which is sometimes cut to the outline shape of the image, often with the intention of creating a three-dimensional effect as seen in the studiolo of the Palazzo Ducale, Urbino.

Marble intarsia (opere di commessi), called pietre dura in English for the semi-precious hardstones combined with colored marbles that are employed, is an intarsia of coloured stones inlaid in white or black marble. Early examples in Florence date from the mid fifteenth century and reached a peak of refinement and complexity in revetments of the Medici Chapel, produced under Medici patronage in the Opificio delle Pietre Dure, which was established by Ferdinando I de’ Medici. Later complex designs and refinement of the art developed in Naples circa the beginning of the 17th century. The floor of St. Peter's Basilica in Rome is a particularly notable example of marble intarsia. Later this form of decoration became a feature of baroque interior design, particularly so in the Sicilian Baroque designs following the earthquake of 1693.

Today intarsia can be made from purchased patterns. To make intarsia from a pattern, first wood is chosen based on color and grain pattern. Next the pattern is transferred onto the wood and individual pieces are precisely cut out on the band saw or scroll saw. Those pieces are then sanded individually or in groups to add depth to the piece. Once the sanding is completed, the wood pieces are fitted together to form the final result. A finish (for example a clear gel stain) can be applied to the individual pieces before gluing, or to the glued final version.[6] 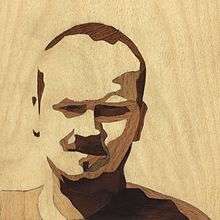