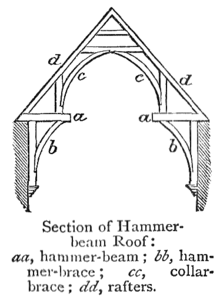 Illustration of a single hammer-beam truss. The collar-braces (c) join to the hammer posts on the bottom and collar beam on top. Chambers 1908

A hammerbeam roof is a decorative, open timber roof truss typical of English Gothic architecture and has been called "...the most spectacular endeavour of the English Medieval carpenter."[1] They are traditionally timber framed, using short beams projecting from the wall on which the rafters land, essentially a tie beam which has the middle cut out. These short beams are called hammer-beams[2] and give this truss its name. A hammerbeam roof can have a single, double or false hammerbeam truss.

A hammerbeam is a form of timber roof truss, allowing a hammerbeam roof to span greater than the length of any individual piece of timber. In place of a normal tie beam spanning the entire width of the roof, short beams – the hammer beams – are supported by curved braces from the wall, and hammer posts or arch-braces are built on top to support the rafters and typically a collar beam. The hammerbeam truss exerts considerable thrust on the walls or posts that support it.[3] Hammerbeam roofs can be highly decorated including ornamented pendants and corbels, with church roofs often including carved angels.

Interior of the Middle Temple hall and its double-hammerbeam roof

Possibly the earliest hammer-beamed building still standing in England, built in about 1290,[8] is located in Winchester, in Winchester Cathedral in Pilgrims' Hall, now part of The Pilgrims' School. 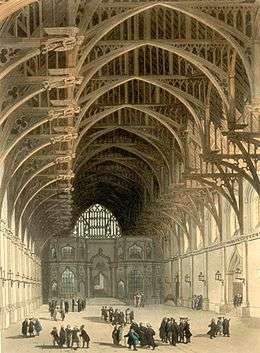 The roof of Westminster Hall (1395–1399) is a fine example of a hammerbeam roof. The span of Westminster Hall is 20.8 metres (68 ft. 4 in.), and the opening between the ends of the hammer beams 7.77 metres (25 ft. 6 in). The height from the paving of the hall to the hammerbeam is 12.19 m (40 ft.), and to the underside of the collar beam 19.35 metres (63 ft. 6 in.), so that an additional height in the centre of 7.16 m (23 ft. 6 in.) has been gained. In order to give greater strength to the framing, a large arched piece of timber is carried across the hall, rising from the bottom of the wall piece to the centre of the collar beam, the latter also supported by curved braces rising from the end of the hammerbeam.

Other important examples of hammerbeam roofs exist over the halls of Hampton Court and Eltham palaces, and Burghley House near Stamford. There are also numerous examples of smaller dimensions in churches throughout England, particularly in the eastern counties. The ends of the hammerbeams are usually decorated with winged angels holding shields; the curved braces and beams are richly moulded, and the spandrels in the larger examples filled in with tracery, as can be seen in Westminster Hall. Sometimes, but rarely, the collar beam is similarly treated, or cut through and supported by additional curved braces, as in the hall of the Middle Temple, London.

Recently, as part of an extensive restoration project undertaken by Historic Scotland, the hammerbeam roof of the Great Hall at Stirling Castle was completely restored. Green oak from 350 Perthshire trees was used to fabricate and erect 57 hammerbeam trusses spanning approximately 15 metres. Since its construction around 1502 by King James IV of Scotland, structural loads from the roof had caused the walls of the hall to deflect outwards. To ensure that the ridge of the roof would be level and straight, the trusses were each made with a slightly different pitch and span. The restoration started in 1991 and was completed in 1999.

A spectacular modern example of a hammer-beam roof is the new Gothic roof of St George's Hall at Windsor Castle, designed by Giles Downe and completed in 1997. This replaced the previous flatter roof which was destroyed in the 1992 Windsor Castle fire.

It is incorrectly believed by some that the widest hammerbeam roof in England at 72 ft (22 m) wide is in the train shed at Bristol Temple Meads railway station by Isambard Kingdom Brunel and Sir Matthew Digby Wyatt.[9] In fact, the roof at Bristol Temple Meads railway station uses modern cantilever construction; the hammerbeam style elements are purely decorative. The hammer posts and brackets support nothing, as all the weight of the roof is braced and supported by the massive side walls via the main timber ribs of the roof and the pillars inside the train shed.[10]