Hanyang University is a private research university in South Korea. The main campus is in Seoul, and the second one, the Education Research Industry Cluster at Ansan, or ERICA campus, is located in Ansan. Hanyang (한양;漢陽) derives from the former name of the capital Seoul which was used during the Chosun Dynasty.[2] Its motto and educational philosophy is Love in Deed and Truth.

The university enrolls over 2,000 foreign students each year and more than 3,000 students study abroad annually.HYU counts the Massachusetts Institute of Technology, University of Cambridge, and Tsinghua University among its 647 partner universities in 68 countries.[1]

University ranking in the world

In 2015, Hanyang University ranked 7th in Korea, 30th in Asia, and 193rd in the world, according to the QS World University Rankings. QS also ranked it at 67 by faculty in engineering and technology, between 101-150 by Subject in Electrical & Electronics Engineering.[5]

Here are a list of other rankings Hanyang University received:

▶ 2015 The World’s Most Innovative Universities by Reuters: 62nd

Hanyang University was founded as Dong-A Engineering Institute on July 1, 1939 during the Japanese occupation of Korea. Dong-A Institute started with 630 students and a faculty of 13 professors and 22 instructors in Jongno-gu, Seoul. After producing its first graduates in 1941, Dong-A tried to elevate itself to college status, to no avail. In May 1941, the Institute relocated and offered education specializing in engineering and technology to 100 students who had finished secondary school. In 1943, with Korea still under Japanese occupation, the Institute was suspended from recruiting new students, which resulted in a temporary shut-down of the school on March 15, 1944, when the last 78 students graduated.

Upon the restoration of the nation's independence in August 1945, Dong-A Institute renamed itself the Engineering Institute for National Foundation and settled at 251 Shindang-dong, Seoul. Institute founder Dr. Kim Lyun-joon foresaw the importance of industrial advancement in the reconstruction of Korea, and established Hanyang as a judicial and academic body. The board of trustees at that time included Myowook Lee, Byeongok Cho, Kwansoo Baik, Wonchul Lee, Waljoon Kim, Taeyong Choi, and Lyunjoon Kim, who had led the nation's independence movement. In July 1948, the school was accredited as the first four-year engineering college in Korea with Kim Lyun-joon as the first Dean. Six departments were set up including Electrical, Mechanical, and Civil Engineering, Architecture, Chemical, and Mining as well as an Engineering High School and a middle school.

Although during the Korean War, many of the school’s facilities were destroyed and the professors and students were scattered, classes were continued in Busan with temporary teachers. However, even during their refuge, the College fostered numerous competent science teachers by building a training center for secondary school teachers in the technical fields. In 1953, it was authorized as a graduate school by the Ministry of Education. The building was restored in Haengdang-dong, Seongdong-gu, Seoul and it is still the current address of Hanyang University.

The Hanyang Student council was first formed at university and college levels in 1960. During the 1970s and 1980s when the dictatorships of Chunghee Park and Doohwan Chun were at their peaks, the Student Union of Hanyang University engaged in student protests against political injustice.[10]

In 1994 Hanyang University set up a masterplan for mid-term and long-term development. In 1997 departments were merged into divisions and at the same year Hanyang University established the Hanyang-Victoria International Language Institute in alliance with the University of Victoria, Canada. In 1998 the Paiknam Academic Information Center & Library was constructed. In March 2008 Hanyang University hosted the 8th Asian and Pacific University President’s Conference.[1]

The Seoul campus of HYU offers undergraduate programs in

The ERICA campus in Ansan offers programs in

As part of its effort to transform into a world-class research institution of higher learning, Hanyang has designated “Outreaching Research Competitiveness” as one of its key strategic directions under the NEW HANYANG 2020 plan. For its part, the Industry-University Cooperation Foundation (IUCF) is working to promote more individual and collaborative research at HYU by providing funding for research projects from their initial stage, and offering assistance in the publication of research papers in prominent international journals, among other duties.[9]

HYU's reputation for research has resulted in some key accomplishments:

On November, Hanyang unveils a 2.6-kilometer-long trail called "Hanyang Doollehgil". The trail includes 8 scenic points of the campus while providing those who walk it with a restful environment.

To strengthen research development and the ability of the future cars, Chung Mong-koo Automotive Research Center was established in 2015. The center was built with a generous gift of 14 million USD from Hanyang alumnus and Chairman of Hyundai Motor Group, Chung Mong-koo. The center is expected to foster active partnerships with the industry’s leading firms from around the globe in addition to provide students with a wide range of research collaboration and employment opportunities.

Opening its International Building in August 2015, Hanyang has announced its change and growth in global education. The newly established International Building has changed into a seven floor building with a lower ground floor. It also includes an Institute of Chinese Studies, group study rooms and joint research institutes with the Graduate School.[11]

First introduced in 2016, the ‘G2 (English-Chinese) Language Education Program obligates the completion of an English and Chinese course and adopts the submission of an official grade of both languages as a mandatory requirement. In addition, Hanyang is strengthening its ties with other universities such as Tsinghua University, China; established a Confucius Academy; and cutting-edge education globally which pursues internationalization by expansion in quality and substantiality.

‘Global 3.0 Program’ explores internationalization in the areas of education, research and industry cooperation. This project was induced to make Hanyang a prestigious university at a global level. Hanyang has established a center for business start-ups in Shanghai, New-York, and San Jose and actively supports students studying abroad. On the other hand, Hanyang is gradually increasing internship opportunities for Korean students.[12]

The Seoul Campus is home to 15 colleges and 60 departments. Seoul Campus, in particular, is made up of a variety of research centers according to field of academics that promote study and cooperation.

Hanyang’s ERICA Campus is home to 8 colleges and the College of General Studies. A total of 44 majors are offered, including 3 interdisciplinary divisions, 27 departments, 4 divisional majors, and 10 major tracks.[9] In 2011, the College of Pharmacy was established. Also, for the students, ERICA campus has 4 buildings of dormitory. 1st building dorm is oldest & cheapest dorm. 2nd and 3rd building dorm is built each for the woman & man. Last, is biggest, most expensive and latest. 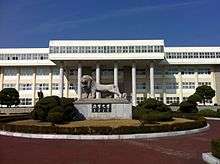 The address of this University is: 55 Hanyangdaehak-ro, Sangnok-gu, Ansan, Gyeonggi-do, 15588, Korea. 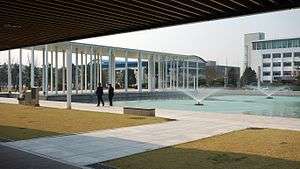 Like all other schools in Korea, the school starts in March. Therefore, the admission process begins in fall. The early admission begins during the summer and the regular admission starts after the college entrance exam which is in November. For the early admission, there are about ten different categories for entering the school according to students’ background, grades, talents or volunteer work.

Hanyang University ranked 193rd on the QS World University list (7th among domestic universities) in 2015. Up 26 spots from the previous year, this is the first time Hanyang to be in the top 200. At present, 7 Korean universities (including Hanyang) are ranked within the world’s top 200 list.[13]

Joongang Ilbo ranked Hanyang University’s Seoul Campus 3rd and ERICA Campus 8th in the country. On a 400-point scale, Seoul Campus was awarded an overall score of 275, and ERICA 237.[14]

‘The World's Most Innovative Universities’ by Reuter

Hanyang has been named among the world’s top 100 most innovative universities by Reuter. The ranking was determined by the composite score of several metrics that were focused on academic papers and patent filings. Reuter ranked Hanyang 5th among Korean universities and 62nd globally in 2015.[15]

For the 57th National Bar Examination in 2015, 11 Hanyang students passed the exam, which is the 5th highest number among Korean universities. The top scorer of all for this bar exam is a proud Hanyang student, Cheon Jae-pil, College of Law.

From analyzing the schools of the 81 successful candidates for technical service positions that was announced on Dec 11th 2015, 10 were Hanyang graduates. This ranks Hanyang University in third place right after Seoul National University (17 candidates) and Yonsei University (14 candidates). Our graduates were admitted to various fields under technical services: 2 each in chemical engineering, civil engineering, architecture, and communications respectively, 1 each in mechanical and electrical sectors respectively. The top scorer of all for this exam is a proud Hanyang graduate, Yoo Bong-mo, College of Architecture.

For the 52nd National Patent Attorney Examination, 26 Hanyang graduates were successful candidates, which is the 4th highest number among Korean universities. Until now, the cumulative total sum of attorneys who graduated from Hanyang is 296.

In comparing the number of candidate success for the 50th CPA Examination in 2015, Hanyang University ranked 6th among Korean universities. Out of 917 successful candidates, 55 were Hanyang graduates. The cumulative passing number is 296, which is the 6th highest among universities in the nation.

From analyzing the schools of successful candidates for the judicial examination 2015, 2 were Hanyang graduates. This ranks Hanyang University in second place right after Korea University (3 candidates). The exam was especially challenging and competitive in 2015, where only a total of 13 candidates passed the exam. The top scorer for the 2015 exam is a proud Hanyang graduate.[16]

Hanyang University is located at the center of the capital city of Korea, Seoul, and Ansan. There are two campuses in Korea.The university also operates at several more remote locations (see below). 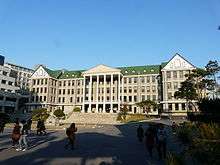 Seoul campus has more than 60 buildings including those of Hanyang Women’s University and Hanyang Cyber University. There are 5 gates into the campus. The map of both campuses can be downloaded on the website.[17] Recently, the school built a few new buildings on campus. The new administration building was completed in February 2009 in commemoration of HYU’s 70th anniversary. The Business Administration Building A is a specially designed learning environment for business and management students and professionals. Hanyang Institute of Technology (HIT), located behind the main library,is a home to 27 university research institutes and 17 outside enterprises in addition to various related university departments. Fusion Technology Center (FTC) was also built to advance the fields of science and technology and the Center currently houses a number of research centers. Jaeseong Civil Engineering building is a beautiful glass-covered building that has various cutting-edge civil engineering labs and research institutes.[9] 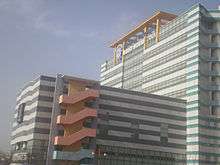 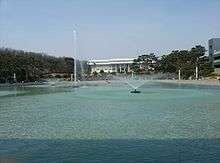 The ERICA campus in Ansan, Gyeonggi-Do (Province), sits approximately 40 km south of Seoul. There are buses that operate to the Hanyang University Subway Station (Green Line No. 2) and the Ansan Subway Station (Light Blue Line No. 4), from the Intercity Bus Terminal and vice versa. There is also a free shuttle bus service, making transportation safe and convenient. There are two type of shuttle bus, one is going for Bus Terminal and another is going for Subway Station.[9] The ERICA campus was on 1,329,362 of natural woodland in the western hub city of Ansan.

In August 2015 construction of a new subway line, the Shin Ansan Line, was decided. The projected opening date is 2023 [18]