For other uses, see Ansan (disambiguation).

Ansan is a city in Gyeonggi Province, South Korea. It lies southwest of Seoul, and is part of the Seoul National Capital Area. It is connected to Seoul by rail via Seoul Subway Line 4. Ansan is situated on the Yellow Sea coast and some islands lie within its jurisdiction. The largest and best-known of these is Daebu Island. Several higher learning institutions are located in Ansan. They include Ansan University, Ansan College of Technology, Seoul Institute of the Arts, and the ERICA campus of Hanyang University. The Korea Transportation Safety Authority, a government agency, is also headquartered in Ansan on June 3, 2002.[2][3] With its high number of foreign workers, Wongokbon-dong has been designated a multicultural area.[4]

The first humans in Ansan were in the New Stone Age, and many shell middens and prehistoric remains are found at Oido, Sihwaho, Chojidong and Daebudo.[5][6] In the Seonbu-dong and Wolpi-dong area, over 10 stone dolmen tombs can be found.[7]:28 Also in 1995, Old Stone Age relics were found while constructing the Seohaean Expressway.[8][9] Most dolmens in Ansan are north dolmen, but the dolmen in Seonbu-dong is table-shaped and another table-shaped tomb was found in Hakon-dong, Gwangmyeong. There are many ancient relics found in the city.[10][11]

Not much evidence or antiquities survive from the Proto-Three Kingdoms and Samhan periods are in Ansan and nearby areas.[7]:29 The Mahan confederacy in Chen Shou in Records of the Three Kingdoms preserves writings about the chiefdom state.[10][12] Ansan was in communion with Baekje but very little has been saved.

In the Later Three Kingdoms era, the Ansan area was owned by Taebong (also known as Hugoguryeo, "Later Goguryeo") in Silla Hyogong's 4th year (AD 900).[7]:31 After then, Gung Ye, who was ruler of Taebong, was overthrown by Wang Geon, and the Ansan area was turned over to Goryeo, founded by Wang Geon. First the Gung Ye Ganggu-gun was changed to Ansan-gun but the state of the military was preserved.

Ansan belonged to Gyeonggijwa-do (left Gyeonggi province) in the Joseon dynasty. Taejo's 5th year (AD 1396), Ansan-eoso (meaning Ansan fishery) that is now under direct control of a detached building of Saongwon (the Department of foods and meals in the Joseon dynasty) was set up.[7]:32 After Gyeonggijwa-do and Gyeonggiwo-do (right Gyeonggi province) were unified in Teajong's 2nd year (AD 1402), Ansan was still called Ansan. Under Teajong's 13th (1413), the whole country was detached into eight provinces.

Until 1914, Ansan City and the southern part of today's Siheung city consisted of Ansan County. In 1914, Ansan County was annexed to Siheung County. This region produced high quality salt from ancient times and valuable marine products. Ansan was then a fishing village.[13] In 1986, several towns of Hwaseong county became incorporated, representing the beginning of Ansan as a city. With currently over 700,000 residents, Ansan now has two distinct and separate districts:[14] Danwon, which has 12 dongs as of 2009, and Sangnok, with 13. 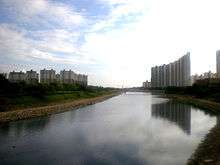 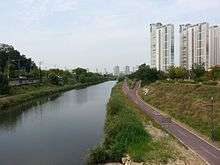 Located at the south of the city are Daebudo[15] and Pungdo.[16] Kwonsun, Gunpo, and Anyang are located in the east of Ansan. The Yellow Sea to the west, Hwaseong to the south, and Siheung to the north are other boundaries.

The Ansan Line is a major rail line in Ansan. The Ansan Line is part of the Seoul Metropolitan Subway as Line 4. Service connects to Oido and Songdo in Incheon. The subway is also connected to the public bus system in Ansan. Previously, the first railroad in the city was the Suin Line which was opened by Korea under Japanese rule.

The Suin Line connecting Suwon to Incheon is set to expand in 2016 when the route from Suwon will connect at Hanyang Univ. at Ansan.[17]

The Shin Ansan Line will connect Yeouido to Ansan in 2023. 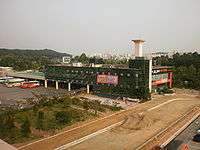 The Ansan Bus Terminal (안산종합버스터미널) near Ansan Station provides daily bus service to Incheon International Airport and most cities in South Korea. Buses travel via Gimpo International Airport and Incheon International Airport. Express buses to Iksan, Dongdaegu, and Gwangju are also available.[19] Near Sangnoksu Station are buses going to Suwon Station and Gangnam Station. Ansan has 53 bus lines with 537 buses operating in and out of the city limits, connecting the city with Seoul and other outlying Gyeonggi cities. The Ansan transfer center also has express city buses, city buses and intercity buses to link to Banwal industrial estate, Sihaw lake and nearby cities.

The Korea Transportation Safety Authority, a government agency of South Korea, is headquartered in Ansan.[2] Other major institutions in Ansan include: 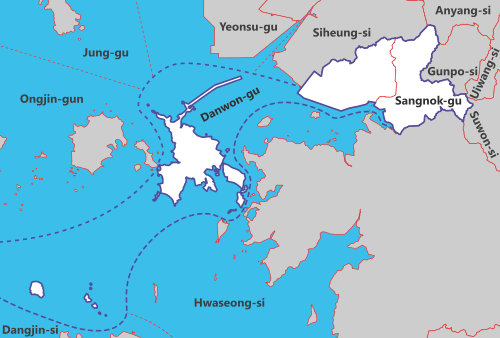 Larger map of the Ansan-si districts. Danwon-gu district covers the west mainland part and stretches to the sea to cover Daebudo and Pungdo islands.

Ansan had the Hyanggyo of national education organization of the country throughout the Joseon Dynasty and Goryeo. Institutions of higher learning located in Ansan include Ansan University, Ansan College of Technology, Seoul Institute of the Arts, and the ERICA campus of Hanyang University.

There are 24 high schools, 29 middle schools, 54 elementary schools and 96 kindergartens in the city.[26] Danwon High School in Ansan was particularly affected by the Sinking of the MV Sewol in 2014 as a large number of the passengers were students from the school, and city streets featured many ribbon memorials and other markers and ceremonies for the disaster.[27]

Because Ansan is a planned city built behind the Ansan Smart Hub following the government's industrial planning, the proportion of agriculture in Ansan industry is very low. Meanwhile, as the government intensively drove a manufacturing industry plan in the Ansan area before Ansan was built, many people work in the manufacturing industry. There are two national industrial complexes, Banwol and Sihwa, as well as the local Banwol plating industrial complex.[28][29][30]

In the past Ansan had fewer attractions due to its industrial and fishing roots, but the east side of the city has recently experienced several beautification projects. The canal systems which bisect the city have bicycling and walking paths, and are covered with roses, tulips, and cherry blossoms in spring. A community bicycle system sponsored by the city is also available for park access and riding. Nowadays, Ansan has many museums and galleries, such as the Ansan Culture and Arts Center, Seongho Memorial Hall, Danwon Sculpture Park, and Hwarang Public Garden. Ansan has run city bus tours for cultural heritage sightseeing since 2008.[31][32][33][34][35]

Historical monuments and structures in Ansan include:

Modern monuments and cultural institutions in Ansan include:

Ansan is home to several parks, including:

Large and small stadiums have been founded from the 1990s on in Ansan.[89] Major sports events in the city take place at the Ansan Wa~ Stadium.[90][91]

The city is home to Shinhan Bank S-Bird Woman’s Basketball Team (member of the Women's Korean Basketball League)[92] It was also a home to the now-defunct National League soccer club Ansan Hallelujah.