Kwangwoon University (or Kwang-Woon or KW) is a private research university in Seoul (Wolgye Dong, Nowon Gu), South Korea. Kwangwoon University has been recognized for its academic reputation in engineering and IT fields.[3] Kwangwoon University was ranked 56th in Asia in field of Engineering in the 2014 and 2015 by Quacquarelli Symonds (QS)[4][5] and ranked 16th in Korea in field of Science and Engineering in 2015 by Korea Economic Daily (한국경제신문)[6] Among its alumni are Jongkyun Shin (JK Shin) (Currently Co-Chief Executive Officer (CEO) and president of Samsung Electronics),[7] Jae Ryung Lee (CEO of Ericsson-LG Enterprise )[8] and Inbee Park (professional golfer).

Kwangwoon started as Chosun Radio Training Center (Global Telecommunication Network Center today) established to promote the advancement of radio technical knowledge and understanding, independent of government and free of Japan. It was renamed in 1940 as the Chosun Institute of Radio Engineering.[9]

Started as Dong-guk Electronics College in 1962, the school became Kwangwoon Institute of Technology in 1964 and a four-year granting Kwangwoon University in 1987.[10]

After Hwado Kwangwoon Cho (Kwangwoon University Founder) died in 1980, with the effort of Musung Cho (the first president Kwangwoon University[11] and currently the 14th Chairman of Kwangwoon Foundation) and many faculties and students, the school became a comprehensive university in 1987. Since then, the Kwangwoon University's reputation and fame heightened as the first educational institution to start wireless communication school and the first school to offer electronics classes to college students in Korean history.[12] Until 1995, the university was ranked top 10 overall and top 3 in the engineering fields in South Korea.

Kwangwoon as a Businessman[13] 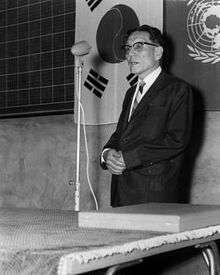 Hwado Cho,Kwangwoon was a gifted businessman. He started out as an employee at a Japanese general merchandise store. Gaining experiences from an attorney's office as a translator & administrator, as a taxi driver, at a rice exchange office, and as a cotton store owner, when Kwangwoon was only 18 years old he obtained so much wealth that he was well known in the Incheon city (he started his businessin Hwado, Incheon) as a rich boy. Having lived during the period of Japanese colony, Hwado (nickname) Cho, Kwangwoon (1899~1980[14]) was also involved in the Korean independent movement in Shanghai, China during his teen age. However, the independent movement leader recognized that Cho, Kwangwoon's talent lay in the academia and suggested to him to study abroad to contribute to the Korean education field so that Korea can be independent from the enforcement of Japanese teachings. Then, the boy was sent to Japan to enroll at Waseda University's department of politics & economics, at the time the only private university in Japan.

However, after much contemplation, he dropped out from Waseda University in his sophomore year; he noticed that South Korea's state of affairs at the time was in chaos and figured that he should do something different for his country instead of just continuing his education in Japan. He first started with obtaining wealth, although he pondered for a moment whether to get into automobile or electronics business, he predicted the lamp reform from increasing electricity usage in the country and decided to get into electronics business. Thereafter, he opened Kwangwoon Electronics Company in Bongnae-dong,[15] Seoul. And from well-known companies such as Matsushita Electric Industrial Company (Now Panasonic[16]) and Toshiba, Kwangwoon received the right to sell their products; Kwangwoon Electronics Company had branch office from entire Korean peninsula and stretching out to Manchuria of today. Although not well published, Hwado Cho, Kwangwoon brought the incandescent light bulbs to Korea for the first time in Korean history since Thomas Edison invented it in 1879; in the early 1900s Korea's main source of light was the lantern.

Friendship with Konosuke Matsushita & Laying the groundwork for Kwangwoon University[17]

Kwangwoon Cho in his 20s and until 1934 was already running multimillion-dollar businesses and the acquaintance with Konosuke Matsushita (founder of Matsushita Electric Industrial Co.), probably was a turning point in his life. Through distributing Matsushita Electric Industrial Company's products to Kwangwoon Electronics Company, Matsushita was so moved by Kwangwoon's diligence that he gave the entire right to sell his products to Kwangwoon and their companionship grew. Besides being a business partner, Matsushita and Kwangwoon's close friendship is betrayed through Matsushita sending 10,000 Yen golden plate to Kwangwoon during Korean War in 1950 as a concern for his safety and for further success in his business. In the 1930s when still Korea under Japanese rule, Konosuke Matsushita asked Kwangwoon to remain as his business partner to further enter the Korean market; however, Kwangwoon denied his offer, thinking the only way for Korea to gain true independence from Japan is through our own education; he showed regrets when he had sent his employees to Japan for technical training abroad and the most talented workers would remain in Japan and had never returned. In a search for autonomy and to retain his employees, Hwado Cho, Kwangwoon established the wireless-communication school in 1934 (Chosun Wireless-Communication School) to develop Korean-born technicians. The school later became Dong-Guk Electronics College (January 21, 1964), Kwangwoon Electronics College (1966) and Kwangwoon University (1987) of today.[18]

In the beginning, Kwangwoon had no plans to expand the school to a university or even a college level; until he made his decision to make advancement to a college and a full-blown university, the school remained as a technical high-school (Kwangwoon Electronic Technical High School of today) that offered wireless-communication and electronics training only. However, constant requests by his second son (Dr. Cho, Musung) to expand the technical high-school to a college to contribute further to the South Korea's Information & Technology (IT) business and education in general moved Hwado Cho, Kwangwoon's heart. And as the first president[20] of Kwangwoon University from 1988~1993,[21] Dr. Cho, Musung, with his contributions (About $470 Million USD until today) to the school in 1988, 1989, 1991,[22] 1992, 2010 respectively, he led Kwangwoon University to one of the top engineering schools in Korea. 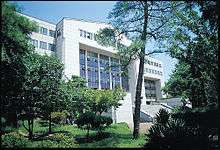 Beginning with the construction of the Bima Building (Electronics & Communication Engineering School) in 1964, Hwado Building (main building) named after the pen name of the founder in 1972 was built. Since then, the amphitheater, student union building (now Okui Building), and central library were completed one after the other.

Established in 1967 with the motto of "Straight viewpoint and sound argument," Kwangwoon University newspaper is published biweekly with the editing guideline of horizontal writing and all-Korean writing. It is distributed to students, faculty, and staff of the university as well as alumni, all high schools nationwide, universities's press, and companies.

As part of the media in Kwangwoon University, Kwangwoon Image Broadcasting Center was established for the production and airing of broadcasting-related contents. Through "Media Kwangwoon" (http://mediakw.org), the center broadcasts programs such as "Kwangwoon News," "Our Visible World," and "Visible Radio." Production is done by undergraduate students. The center is used for the training of professional broadcasting manpower such as announcer, anchor, and broadcasting reporter.

A subsidiary organization of Kwangwoon University opened in 1967 for the purpose of announcing notices, reporting events, refining education, and promoting orderly life, the Educational Broadcasting Station involves students in the work as one of their extracurricular activities.

Named for university supporter Dr. Cho, Musung (The 1st President of KWU and Former Chairman of Kwangwoon Foundation), Donghae Arts Center for the performing arts has recently undergone a 400,000(USD) renovation to benefit the university’s theater and to impact our local community through arts and winter sports. Intended to bring creativity to the university and its surrounding community, the center offers teaching, lecturing, and performance areas that include Small Hall on the 1st floor, Big Hall on the 2nd & 3rd Floors and Ice Rink in the basement for everyone who enjoys the sport of ice skating. As the largest size hall in Northern Seoul and the first university ice rink (3rd in the country), the DAC’s contribution at the local and national level is immeasurable bringing live arts and winter sports to the university and its surrounding community. The center is open all year around except Korean New Year and Thanksgiving days.

Kwangwoon University introduced the English certification system, and gives lectures in English in 33% of the classes of major subjects as of 2011. Since 2011, freshmen have to achieve a degree of proficiency in a second foreign language (Chinese, Japanese, Spanish, or Russian) before graduation. In addition, exchange agreements have been signed with universities worldwide.

College of Electronics and Information Engineering 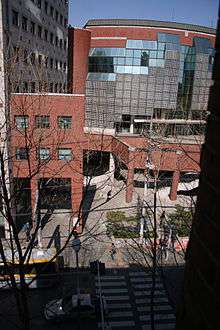 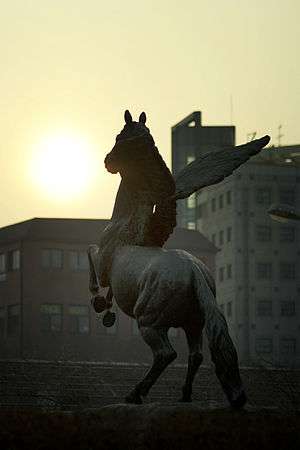