Hastinapur (Hindi: हस्तिनापुर, Sanskrit: हास्तिनपुरम् Hāstinapuram) is a town and a nagar panchayat in Meerut district in the Indian state of Uttar Pradesh.

Hastinapuram (Sanskrit) Hastin (elephant) + puram (city) is a city named after the elephants. History of this place begins from the period of Mahabharata. It is also said that this place is named after the King Hastin. After few generations Kuru born and so called Kuru dynasty came into existence. It is also described as Gajpur, Nagpur, Asandivat, Brahmasthal, Shanti Nagar and Kunjarpur in ancient texts.

Balarama pulling Hastinapur toward the Ganges, page from a Bhagavata Dasamskanda series.

The first reference to Hastinapur in Puranas comes as the capital of Emperor Bharata. Samrat Samprati, the grandson of the emperor Asoka the Great, of the Mauryan Empire, built many temples here during his empire. The ancient temple and stupas are not present today. Excavation at Hastinapur was carried out in the early 1950s by B.B. Lal, Director General of the Archaeological Survey of India. Although the main aim of this excavation, mentioned by Lal himself, was to find out the stratigraphic position of Painted Grey Ware with reference to other known ceramic industries of the early historical period, Lal also ended up making correlations between the text of the Mahabharata and the material remains that he uncovered at Hastinapur. This exercise led him to historicize some of the traditions mentioned in the text, as well as link the appearance of the Painted Grey Ware with Aryans in upper Ganges basin areas.[2] Though pre-history of Hastinapur is not clear as full scale excavation could not be undertaken in inhabited area. In the medieval era, Hastinapur was attacked by Mughal ruler Babur when invading Hindustan. During British India, Hastinapur was ruled by the Gujjar Raja Nain Singh Nagar. He built many Hindu temples in and around Hastinapura.[3]

In the present-day Hastinapur is a town in the Doab region of Uttar Pradesh in India around 37 km from Meerut and 90 km north-east of Delhi on National Highway 119. It is a small township re-established by Jawaharlal Nehru on February 6, 1949. Hastinapur is located at 29°10′N 78°01′E﻿ / ﻿29.17°N 78.02°E﻿ / 29.17; 78.02.[4] Hastinapur has an average elevation of 218 metres, and it experiences extremes of climate similar to the other cities of Uttar Pradesh. The summer season is from the month of March to the month of May, during which the temperatures vary from a minimum of about 32 °C to about 40 °C. The monsoon season is from July to September, and temperatures during this time are usually moderately low. In winter (between December and February), temperatures can drop to nearly 5 °C and usually don't rise beyond 14 °C, with December being the coldest month in the year.

Located on the banks of old ravine of Ganges, Hastinapur is considered one of the holiest place by both Hindus and Jains alike. It is believed to be the birthplace of three Jain Tirthankaras. There are many ancient Hindu temples, Pandeshwar Temple, Karna Temple and Jain temples such as Shri Digamber Jain Mandir, Jambudweep, Kailash Parvat, Shwetambar Jain Temple. Apart from these temples, a nearby Gurdwara and Hastinapur Sanctuary are also popular among tourists. 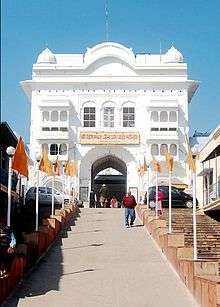 Shri Digamber Jain Bada Mandir is the oldest Jain Temple in Hastinapur. The main temple is believed to be built in the year 1801 under the auspices of Raja Harsukh Rai, who was the imperial treasurer of the Emperor Shah Alam II.[6][7] The principal deity in the main temple is of 16th Jain Tirthankar, Shri Shantinath in Padmasana posture. The altar also has idols of 17th and 18th Tirthankara, Shri Kunthunath and Shri Aranath on each side.[8] There are dozens of other temples and historical monuments in the premises which were mostly built in the late 20th century. Shri Digamber Jain Mandir Tirth Kshetra Committee is also managing numerous Dharamshalas for Jain pilgrims. It has many other facilities including Post Office, Police Sub-station, Jain Gurukul and Udaseen ashram. There are nearby sites of tourist attraction as well, like Jal Mandir, Jain Library, Acharya Vidyanand Museum, 24 Tonks and ancient Nishiyaji’s, situated few kilometres from the main temple.[9] 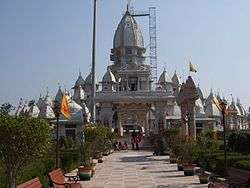 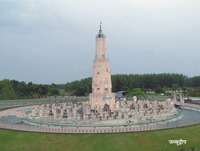 Jambudweep depicting the model Jain cosmology has been designed here under the supervision of Shri Gyanmati Mataji was in 1985. The premises has various Jain temples which includes Sumeru Parvat, Lotus Temple, Teen Murti Mandir, Meditation Temple, Badi Murti, Teen Lok Rachna and many other tourist attractions.[12]

The Shwetambar temple is renovated recently and the re-establishment took place on Margashirsha Shukla of VS 2021. Ashtapad Teerth built under the aegis of Shri Shwetambar Jain Temple is 151 feet high structure.[13] The architectural details of this monument is worth being seen. The Panch-kalyanak Pratishtha took place in December 2009 under nishra of Gachhadipati Acharya Nityanand Surishwerji. Jain Sthanak is also situated near to Shwetambar Jain Temple.[14]

Located in the ruins of the old city of Hastinapur, Pandeshwar temple, believed to be around 7000-year-old [15] is dedicated to Lord Shiva.This temple is believed to be a place where Kauravas and Pandavas took education of Vedas and Puranas. A temple of Goddess Kali and many Hindu Ashrams are also present on hillock of the ruins.

Karna Temple dated to about 4000 B.C.[16] is situated near to Pandeshwar temple, lies on the bank of old ravine of Ganges. The Shivling inside Karna temple is said to be established by Karna, one of the central figures in the epic of Mahabharata.[17]

It is a small Gurdwara located in a village Saifpur, some 2.5 km (1.6 mi) away from Hastinapur. Bhai Dharam Singh (1666–1708) was one of the Panj Pyare (Punjabi: ਪੰਜ ਪਿਆਰੇ) or the Five Beloved, the forerunners of Khalsa. He was the son of Bhai Sant Ram of the village Saifpur.[18][19]

Various cultural and religious fairs are held here round the year, like Akshaya Tritiya, Das Lakshana, Kartik mela, Holi mela, Durga Puja and many other programs are organised by NGOs and the tourism department round the year.