Parikshit (Sanskrit: परिक्षित्, Parikṣit[note 2]) was a Kuru king who reigned during the Vedic period.[5] Along with his successor Janamejaya, he played a decisive role in the consolidation of the Kuru state, the arrangement of Vedic hymns into collections, and the development of the orthodox srauta ritual, transforming the Kuru realm into the dominant political and cultural center of northern Iron Age India.[6]

He also appears as a figure in later legends and traditions. According to the Mahabharata and the Puranas, he succeeded Yudhishthira to the throne of Hastinapur.

Parikshit's name came from the Sanskrit verb root परि-क्षि pari-kṣi = "around-possess" (or, less likely here, "around-destroy"). An alternate suggestion from Suryakant Tripathi 'Nirala''s translation is Pariskhita. Alternative modern spellings of his name, not all of them correct as regards the original Sanskrit, are Pariksita, Pariksit, Parikshat, Parixit and Parikshita. His name is a common Hindu name across Nepal today. 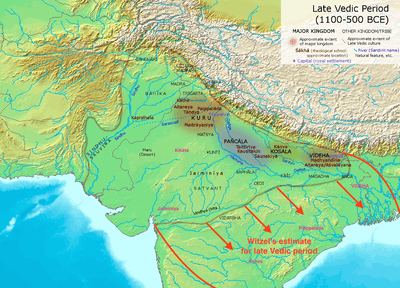 Kuru and other kingdoms of the Vedic period

"Listen to the good praise of the King belonging to all people, who, (like) a god, is above men, (listen to the praise) of Parikṣit! - ‘Parikṣit has just now made us peaceful dwelling; darkness has just now run to its dwelling.’ The Kuru householder, preparing (grains) for milling, speaks (thus) with his wife. — ‘What shall I bring you, sour milk, the mantha [a barley/milk drink], (or)the Parisrut [liquor]?’ the wife keeps asking in the Realm of King Pariksit. — By itself, the ripe barley bends heavily (iva) over the deep track of the path. The tribe thrives auspiciously in the Realm of King Parikṣit.”[7][8]

Parikshit is eulogised in a hymn of the Atharvaveda (XX.127.7-10) as a great Kuru king (Kauravya), whose realm flowed with milk and honey and people lived happily in his kingdom. He is mentioned as the raja vishvajanina (universal king).[9] According to the Shatapatha Brahmana (XIII.5.4), Parikshita had four sons, Janamejaya, Bhimasena, Ugrasena and Śrutasena. All of them performed the Asvamedha Yajna (horse sacrifice).[10]

Parikshit was the grandson of Arjuna and Subhadra and the son of Abhimanyu and his wife Uttarā.[11]

His bodily existence ended due to the curse of a Brahmana, who used the Nāga king, Takshaka, the ruler of Taxila as the instrument of death.[12] Parikshit was a husband of Queen Madravati and was succeeded by his son Janamejaya.[13] According to the Mahabharata, he ruled for 24 years and died at the age of sixty.[14]

A thesis based upon Ugrasravas’ narration suggests an alternate interpretation regarding Parikshit’s lineage. In this interpretation, Parikshit fathered a firstborn son with an unnamed putrika wife. Albeit the child was Parikshit’s firstborn, he was the son of a putrika and therefore could not succeed his father on the throne as he was to be the heir of his maternal grandfather. This son’s name was Sringin; his maternal grandfather was Samika. As this would leave Parikshit without an heir, he had another son, Janamejaya, with a second wife, Madravati. Sringin and Samika are seen again in the hunting story that results in Parikshit’s demise. Their relationship served an additional motive for Sringin to murder Parikshit.[15]

Sage Shukdeva narrating the story of Krishna to Parikshit. 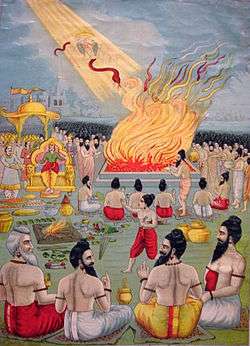 On hearing this, Parikshit's son Janamejaya vowed to kill Takshaka within a week. He starts the Sharpamedha Yajna, which forced each and every snake of the entire universe to fall in the havan kund. However one snake got stuck around Surya's chariot and because of the force of Yajna the chariot was also getting pulled inside the hawankund. This could have ended up taking the Surya's chariot in hawankund and ending the regime of Sun from the universe. This resulted in plea from all the gods to stop the Yajna. When Takshaka arrived then this Yajna was stopped from doing so by Astika Muni, as a result of which Takshaka lived. That day was Shukla Paksha Panchami in the month of Shravan and is since celebrated as the festival of Nag Panchami.[16]