Louisa May Alcott (/ˈɔːlkət, -kɒt/; November 29, 1832 – March 6, 1888) was an American novelist and poet best known as the author of the novel Little Women (1868) and its sequels Little Men (1871) and Jo's Boys (1886).[1] Raised by her transcendentalist parents, Abigail May and Amos Bronson Alcott in New England, she also grew up among many of the well-known intellectuals of the day such as Ralph Waldo Emerson, Nathaniel Hawthorne, and Henry David Thoreau.

Alcott's family suffered financial difficulties, and while she worked to help support the family from an early age, she also sought an outlet in writing. She began to receive critical success for her writing in the 1860s. Early in her career, she sometimes used the pen name A. M. Barnard, under which she wrote novels for young adults.

Published in 1868, Little Women is set in the Alcott family home, Hillside, later called the Wayside, in Concord, Massachusetts and is loosely based on Alcott's childhood experiences with her three sisters. The novel was very well received and is still a popular children's novel today, filmed several times.

Alcott was an abolitionist and a feminist and remained unmarried throughout her life. She died in Boston on March 6, 1888. Henry James called her "The novelist of children... the Thackeray, the Trollope, of the nursery and the schoolroom."[2]

Louisa May Alcott was born on November 29, 1832,[1] in Germantown,[1] which is now part of Philadelphia, Pennsylvania, on her father's 33rd birthday. She was the daughter of transcendentalist and educator Amos Bronson Alcott and social worker Abby May and the second of four daughters: Anna Bronson Alcott was the eldest; Elizabeth Sewall Alcott and Abigail May Alcott were the two youngest. The family moved to Boston in 1834,[3] where Alcott's father established an experimental school and joined the Transcendental Club with Ralph Waldo Emerson and Henry David Thoreau. Bronson Alcott's opinions on education and tough views on child-rearing shaped young Alcott's mind with a desire to achieve perfection, a goal of the transcendentalists.[4] His attitudes towards Alcott's wild and independent behavior, and his inability to provide for his family, created conflict between Bronson Alcott and his wife and daughters.[4]

In 1840, after several setbacks with the school, the Alcott family moved to a cottage on 2 acres (8,100 m2) of land, situated along the Sudbury River in Concord, Massachusetts. The three years they spent at the rented Hosmer Cottage were described as idyllic.[5] By 1843, the Alcott family moved, along with six other members of the Consociate Family,[4] to the Utopian Fruitlands community for a brief interval in 1843–1844. After the collapse of the Utopian Fruitlands, they moved on to rented rooms and finally, with Abigail May Alcott's inheritance and financial help from Emerson, they purchased a homestead in Concord. They moved into the home they named "Hillside" on April 1, 1845.[6] 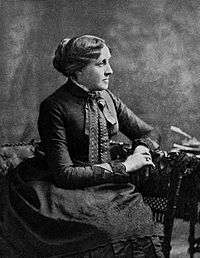 Alcott's early education included lessons from the naturalist Henry David Thoreau, but she received the majority of her schooling from her father, who was strict and believed in "the sweetness of self-denial".[4] She also received some instruction from writers and educators such as Ralph Waldo Emerson, Nathaniel Hawthorne, and Margaret Fuller, all of whom were family friends. She later described these early years in a newspaper sketch entitled "Transcendental Wild Oats". The sketch was reprinted in the volume Silver Pitchers (1876), which relates the family's experiment in "plain living and high thinking" at Fruitlands.

Poverty made it necessary for Alcott to go to work at an early age as a teacher, seamstress, governess, domestic helper, and writer. Her sisters also supported the family, working as seamstresses, while their mother took on social work among the Irish immigrants. Only the youngest, May, was able to attend public school. Due to all of these pressures, writing became a creative and emotional outlet for Alcott.[4] Her first book was Flower Fables (1849), a selection of tales originally written for Ellen Emerson, daughter of Ralph Waldo Emerson.

In 1847, she and her family served as station masters on the Underground Railroad, when they housed a fugitive slave for one week.[7] Alcott read and admired the "Declaration of Sentiments", published by the Seneca Falls Convention on women's rights, advocating for women's suffrage and became the first woman to register to vote in Concord, Massachusetts in a school board election.[8] The 1850s were hard times for the Alcotts. At one point in 1857, unable to find work and filled with such despair, Alcott contemplated suicide. During that year, she read Elizabeth Gaskell's biography of Charlotte Brontë and found many parallels to her own life. In 1858, her younger sister Elizabeth died, and her older sister Anna married a man by the name of John Pratt. This felt, to Alcott, to be a breaking up of their sisterhood.[4] 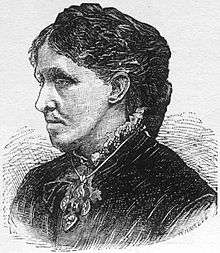 As an adult, Alcott was an abolitionist and a feminist. In 1860, Alcott began writing for the Atlantic Monthly. When the American Civil War broke out, she served as a nurse in the Union Hospital at Georgetown, D.C., for six weeks in 1862–1863. She intended to serve three months as a nurse, but halfway through she contracted typhoid and became deathly ill, though she eventually recovered. Her letters home – revised and published in the Boston anti-slavery paper Commonwealth and collected as Hospital Sketches (1863, republished with additions in 1869) – brought her first critical recognition for her observations and humor.[9] She wrote about the mismanagement of hospitals and the indifference and callousness of some of the surgeons she encountered. Her main character, Tribulation Periwinkle, showed a passage from innocence to maturity and is a "serious and eloquent witness".[4] Her novel Moods (1864), based on her own experience, was also promising.

In the mid-1860s, Alcott wrote passionate, fiery novels and sensational stories under the nom de plume A. M. Barnard. Among these are A Long Fatal Love Chase and Pauline's Passion and Punishment. Her protagonists for these tales are willful and relentless in their pursuit of their own aims, which often include revenge on those who have humiliated or thwarted them. She also produced wholesome stories for children, and after their positive reception, she did not generally return to creating works for adults. Adult-oriented exceptions include the anonymous novelette A Modern Mephistopheles (1875), which attracted suspicion that it was written by Julian Hawthorne; and the semi-autobiographical tale Work (1873).

Alcott became even more successful with the first part of Little Women: or Meg, Jo, Beth and Amy (1868), a semi-autobiographical account of her childhood with her sisters in Concord, Massachusetts, published by the Roberts Brothers. Part two, or Part Second, also known as Good Wives (1869), followed the March sisters into adulthood and marriage. Little Men (1871) detailed Jo's life at the Plumfield School that she founded with her husband Professor Bhaer at the conclusion of Part Two of Little Women. Jo's Boys (1886) completed the "March Family Saga". 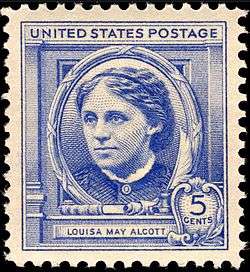 In Little Women, Alcott based her heroine "Jo" on herself. But whereas Jo marries at the end of the story, Alcott remained single throughout her life. She explained her "spinsterhood" in an interview with Louise Chandler Moulton, "I am more than half-persuaded that I am a man's soul put by some freak of nature into a woman's body ... because I have fallen in love with so many pretty girls and never once the least bit with any man." However, Alcott's romance while in Europe with the young Polish man Ladislas "Laddie" Wisniewski was detailed in her journals but then deleted by Alcott herself before her death.[10][11] Alcott identified Laddie as the model for Laurie in Little Women, and there is strong evidence this was the significant emotional relationship of her life.[12] Likewise, every character seems to be paralleled to some extent, from Beth's death mirroring Lizzie's to Jo's rivalry with the youngest, Amy, as Alcott felt a sort of rivalry for (Abigail) May, at times.[13][14] Though Alcott never married, she did take in May's daughter, Louisa, after May's death in 1879 from childbed fever, caring for little "Lulu" until her death.[15]

Little Women was well received, with critics and audiences finding it suitable for many age groups. A reviewer of Eclectic Magazine called it "the very best of books to reach the hearts of the young of any age from six to sixty,".[16] It was also said to be a fresh, natural representation of daily life. 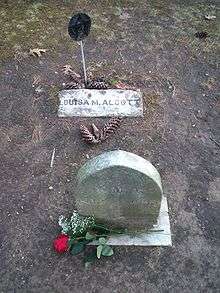 Along with Elizabeth Stoddard, Rebecca Harding Davis, Anne Moncure Crane, and others, Alcott was part of a group of female authors during the Gilded Age, who addressed women's issues in a modern and candid manner. Their works were, as one newspaper columnist of the period commented, "among the decided 'signs of the times'"[17]

Alcott suffered chronic health problems in her later years,[18] including vertigo.[19] She and her earliest biographers[20] attributed her illness and death to mercury poisoning. During her American Civil War service, Alcott contracted typhoid fever and was treated with a compound containing mercury.[11][18] Recent analysis of Alcott's illness, however, suggests that her chronic health problems may have been associated with an autoimmune disease, not mercury exposure. Moreover, a late portrait of Alcott shows a rash on her cheeks, which is a characteristic of lupus.[18][20]

Alcott died of a stroke at age 55 in Boston, on March 6, 1888,[19] two days after her father's death. Her last words were "Is it not meningitis?"[21] She is buried in Sleepy Hollow Cemetery in Concord, near Emerson, Hawthorne, and Thoreau, on a hillside now known as "Authors' Ridge".[22]

Her Boston home is featured on the Boston Women's Heritage Trail.[23] 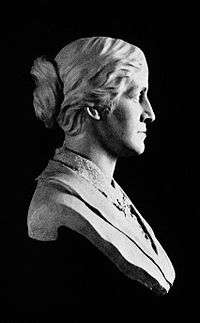 Bust of Louisa May Alcott

There is a Part Second of Little Women, also known as "Good Wives", published in 1869; and afterward published together with Little Women.

Other short stories and novelettes