Emily Howell Warner (born October 30, 1939 in Denver, Colorado) is an American airline pilot and the first woman captain of a scheduled US airline.[1]

In 1973, Warner was the first woman pilot to be hired by a scheduled US airline since Helen Richey was hired as a co-pilot in 1934.[2][3] In 1976 Warner was the first woman to become a US airline captain.[4][5] Her career has been recognized by multiple halls of fame, including the National Aviation Hall of Fame and National Women’s Hall of Fame.[6][7] Her pilot’s uniform is on display at the Smithsonian's National Air and Space Museum.[8] In addition to piloting, Warner was a flight school manager in Denver, Colorado. She was a flight instructor and FAA designated flight examiner holding multiple ratings.[1] She flew more than 21,000 flight hours and performed more than 3,000 check rides and evaluations over her career.[1][9] She is retired. 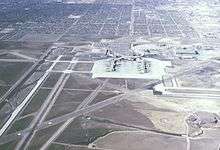 Stapleton Airport as seen from the air in 1966. This is where Emily Howell Warner took flying lessons and was her base of employment for decades.

Emily Howell was born on October 30, 1939, and attended Holy Family High School in Colorado.[10] Warner was interested in airplanes as a child.[11] After graduating high school she looked into becoming a flight attendant.[8]

At seventeen, she decided on a career in piloting after her first trip on an airplane.[4][12] She was allowed to sit in the cockpit of a plane flying her home after a trip away from Denver. Warner said, “The pilot could see how excited I was and he encouraged me to take flying lessons. I replied: ‘Can girls do that?’”[10][13] She started flying in 1958, after getting the approval of her parents for lessons.[4][10] The lessons cost thirteen dollars per week at a time that she had a thirty-eight dollar per week paycheck.[4] She sometimes worked fourteen hours a day, with a morning flight, a full-time office job, and an evening flight. She obtained her private pilot license and a job as a flying traffic reporter within a year.[4]

Two Convair 580s (here belonging to Aspen Airways) at Stapleton Airport in 1986. This is one of the models of aircraft Emily Howell Warner began flying at Clinton Aviation.

She took a job as a receptionist for Clinton Aviation Company in Denver, Colorado to pay for her instruction.[8] She worked there as a flight instructor after obtaining additional certificates as a commercial pilot and flight instructor, and instrument and multiengine ratings.[10] She worked extra maintenance flights, such as delivering airplane parts or planes, in order to build her hours. She also flew with a reporter to provide traffic reports.[8]

From 1945 to 1968, Clinton Aviation Company operated at Stapleton Airport and was the first company in the US to sell Cessna airplanes. It was founded by Lou Clinton and Grant Robertson.[14] Warner initially flew for Clinton Aviation as a first officer on Convair 580s and de Havilland Twin Otters.[4] She was later promoted to flight school manager and chief pilot.[4][15] She became the first woman to be appointed a designated FAA Pilot Examiner.[10]

In 2000, she began applying for a position at Frontier Airlines as well as Continental Airlines and United Airlines.[6] Lou Clinton wrote letters recommending her.[14] She would renew her applications multiple times over a five-year period.[4] In late 1972, a fellow flight instructor said he was hired by Frontier Airlines, strengthening Warner's resolve.[11] At this point, Warner had been active in the aviation industry for more than twelve years. She had accrued more than 3,500 flight hours as a pilot[10] and 7,000 hours as a flight instructor.[6] Students she had trained were being hired with 1,500 to 2,000 hours of flying time.[4][6] A friend who worked with Frontier introduced her to the vice president of flight operations there[8] and Warner persisted in canvassing Frontier for a position.[11] 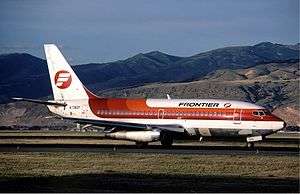 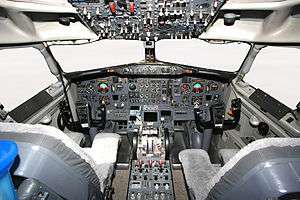 The flight deck of a Boeing 737-200 as it was configured when Warner made her first flights with Frontier.

On January 29, 1973, Frontier Airlines hired her.[4][11] It was fifteen years after her first plane flight.[10] This marked an opening for American women in one of the last sex-segregated occupations in the civilian aviation industry.[3] When Warner was hired there were no other women working as pilots for the major commercial airlines. By 1978, there were about 300 female commercial pilots in the United States.[6]

On February 6, 1973, Howell Warner served for the first time as second officer on a Frontier Airlines Boeing 737.[10] The flight departed from Denver's Stapleton Airport for Las Vegas.[6][10] Within six months, she was promoted to first officer.[6] In 1974, she became the first woman member of the Air Line Pilots Association (ALPA).[4]

Howell Warner continued to fly with Frontier until they went out of business in 1986.[8] Warner stayed on when People Express purchased Frontier and then by Continental Airlines.[11] After a short time flying for Continental Airlines, she left to become captain of a Boeing 737 for UPS Airlines.[4][8] She also flew a DC-8 for United Parcel Service.[15] In 1986, she commanded an all-female flight crew.[6][7]

In 1990, she left UPS Airlines to become a Federal Aviation Administration examiner.[4] She was the FAA Aircrew Program Manager, assigned to United Airlines' Boeing 737 Fleet.[8][12]