Henan Jianye Football Club (simplified Chinese: 河南建业; traditional Chinese: 河南建業; pinyin: Hénán Jiànyè) is a professional football club that currently participates in the Chinese Super League under licence from the Chinese Football Association (CFA). The team is based in Zhengzhou (Chinese: 郑州市), in the province of Henan (Chinese: 河南省) and their home stadium is the Zhengzhou Hanghai Stadium that has a seating capacity of 29,860. Their owners are the Jianye Residential Group (China) Co., Ltd., which is part of the Central China Real Estate Limited.[2]

The clubs predecessor was the Henan Provincial Team who were founded in 1958 while the current professional football team was established on August 27, 1994. The club have never won the league title and the highest position they have ever achieved was when they came third in the 2009 Chinese Super League season.[3]

The football club were originally known as Henan Provincial team and was founded in 1958 by the local government sports body to take part in the 1959 Chinese National Games before joining the gradually expanding Chinese football league system. The team often spent much of its time in the second tier except for a short period during the late 1970s when the league was expanded to accommodate more teams. When the Chinese football league system grew to accommodate a third tier Henan found themselves in it when they were relegated from the second tier in the 1981 league season, however they were able to quickly return to the second tier when they came top of the table to win promotion in the 1982 league season. It wasn't long until they won promotion to the top tier once more in the 1985 league season where they would remain until the 1988 league season when they were relegated at the end of the season.

By the 1994 league season the entire Chinese football league system had become professional and Henan would quickly follow when they became professional on August 27, 1994 by selling a 40% stake of the club to Jianye Residential Group (China) Co., Ltd. and renaming themselves Henan Jianye.[4] Henan's transition toward professionalism was difficult and they were once more relegated at the end of the 1994 league season to the third tier.[5] Once again they would have to win promotion from the third tier when they came runners-up in the table at the 1995 league season. For several season they were a second tier club fighting against relegation until Henan Jianye Real Estate Development Co., Ltd. decided to take full control of the club on January 15, 1999. With this sure financial footing the club would go on to win the division title and establish themselves back into the second tier.[6]

The club won promotion to the Chinese Super League at the end of the 2006 league season after winning the division title.[7] In their debut season in the top tier playing professional football Henan brought in Pei Encai to add experience to their management and to help them avoid relegation, which he achieved when they finished the season in 12th position, narrowly avoiding relegation after defeating Changchun Yatai 3–2. While he helped them avoid relegation Henan demanded results in the 2008 league season and this saw them go through several managers before they settled with Tang Yaodong to help them avoid relegation once more. His appointment was to prove extremely successful and throughout the 2009 league season he would lead them to a third-place finish, which is the highest league position they have ever achieved.

The third-place finish led to the club's first and only appearance in the AFC Champions League in 2010. Henan finished the championship with 3 draws and 3 losses in the group stage. From then on, the club's performance dropped from year to year. In 2011, they finished the season in 13th position. After an even more chaotic and unsatisfying season in 2012, the club was relegated to the second division.

Henan appointed Tang Yaodong again in 2013, who helped the team return to the Chinese Super League after the season. However, Tang was once again dismissed halfway through the 2014 season due to the team's disastrous performance. Jia Xiuquan took the position. The team fought hard against Beijing Guoan in the last game of the season. This goalless game helped the club stay in the Chinese Super League narrowly by 1 point. 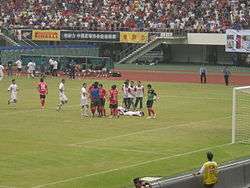 Managers who have coached the club and team since Henan became a fully professional club back in August 27, 1994.[9][10]