Guangzhou Evergrande Taobao Football Club[1] is a professional Chinese football club that participates in the Chinese Super League under the license of the Chinese Football Association. The team is based in Guangzhou, Guangdong, and their home stadium is the Tianhe Stadium which has a seating capacity of 58,500. Their majority shareholders are the Evergrande Real Estate Group (60%) and the e-commerce company Alibaba Group (40%).[2][3][4]

They were founded in 1954, and won several second tier titles before they became professional in 1993. Their results improved, leading to a runners-up spot in China's top tier. Unable to improve upon these results the club went through a period of stagnation and decline before they experienced a brief revival when they won the 2007 second division. In 2009 the club were embroiled in a match-fixing scandal and they were punished with relegation. The Evergrande Real Estate Group decided to purchase the club and pumped significant funds into the team. They immediately won promotion and gained their first top tier title in the 2011 season. The club is the only Chinese football club to win AFC Champions League twice, in 2013 and 2015.[5][6] The club is also the first Chinese club to participate in the FIFA Club World Cup, making its first appearance in 2013.

According to Forbes, Guangzhou Evergrande is the most valuable football team in China, with a team value of $282 million and an estimated revenue of $57 million in 2015.[7]

In June 1954, the local Guangzhou sports body founded Guangzhou FC to take part in the recently formed Chinese national football league. They entered the club in the 1955 league season and named Luo Dizhi as their first manager. He guided them to an eighth spot finish in their debut campaign.[8] The league had grown to incorporate a second tier and their debut season performance final standing relegated them to the second division. Guangzhou won the division championship, however the Chinese Football Association decided to restructure the league at the beginning of the 1957 season and Guangzhou were denied promotion.[9] Despite this, Luo Rongman managed the team to win the 1958 second division title; however, the club were unable to gain promotion because this time they went into receivership. They were not re-established until April 1961 and were allowed to take part in the top tier. Back within the top division Guangzhou often struggled within the league and were again relegated to the second tier at the end of the 1963 league season. They remained there until 1966 when the Cultural Revolution halted football in China.[10]

When the Chinese football league restarted, Guangzhou took the unusual step of abstaining from the competition and instead on 26 October 1977 brought Luo Rongman to manage in their development of their youth team.[11] The team played within the National Youth League until 1980 when it was decided that they were mature enough to play in the football league pyramid. They started in the recently created third division. The club's youth team development immediately paid off and players such as Mai Chao, Zhao Dayu and later Wu Qunli all rapidly rose into Chinese international footballers. Guangzhou gained successive promotions until they reached the top tier. At the end of the 1982 league season Guangzhou were relegated again. They returned to the top division at the end of the 1984 season via the Chinese FA Cup. With this promotion on 1 October 1984, the club was the first Chinese team to gain sponsorship when Guangzhou Pharmaceutical Co., Ltd. signed a $200,000 annual deal with the club.[12]

Throughout the 1990s, the Chinese Football Association were demanding more professionalism from their football teams. Guangzhou was one of the first fully professional football clubs in China after the Apollo Group took over the club on 8 January 1993. The investment aided the manager Zhou Suian to help create a competitive squad. Hu Zhijun won the top goalscoring award. Guangzhou were able to gain a runners-up spot at the 1994 league season.[13] The following season Zhou Suian left the team after having twice guided the club to a runners-up position within the league and a runners up spot against Shanghai in the 1991 Chinese FA Cup. After his exit, the club were unable to replicate the same results. When influential international footballers Peng Weiguo and Hu Zhijun left the club, the team went into free fall and were relegated at the end of the 1998 league season.[14] With the management concerned about the team's performance, an investigation was launched which discovered that Wen Junwu and three other players were in collusion with gambling groups and were immediately expelled from the club.[15] In 2001, the Guangzhou Sports Bureau took over the club again. With significant investment coming from the Zhejiang Geely Holding Group Co., Ltd it was hoped that the club could push for promotion. The division was rocked by a match-fixing scandal involving Changchun Yatai, Chengdu Wuniu, Jiangsu Sainty and Zhejing Greentown. Guangzhou's new sponsors Geely immediately pulled their funding from the team to distance themselves from the bad publicity.[16] The club went through a tough transitional period until the Sunray Cave Group took over the club in 2004 and started to invest money in hopes of pushing for promotion.[17] When the Guangzhou Pharmaceuticals group took over the club in 2006, they were able to realize the ambition of gaining promotion. The club won the 2007 division title and entry to the Chinese Super League.[18] 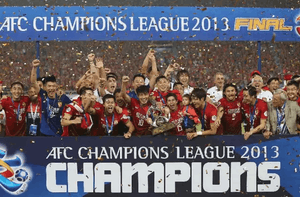 The club won its first continental title in 2013.

In February 2010, Guangzhou was relegated back to the China League One in the fallout of a match-fixing scandal despite having achieved a ninth-place finish in the 2009 season.[19] The match in question was the 19 August 2006 league game against Shanxi Luhu, which Guangzhou won 5–1 when they were still playing in the China League One. It was discovered by the police that the Guangzhou general manager Yang Xu paid ¥200,000 to the opposing general manager Wang Po to secure a win at home and that Guangzhou's vice president's Wu Xiaodong and Xie Bin knew about it.[20] With the offending participants sentenced to jail for fraud, the club was put up for sale.[21] On 28 February 2010, Evergrande Real Estate Group took over the club for a fee of ¥100 million. Xu Jiayin, chairman of Evergrande Real Estate Group, said that they would pump more funds into the transfer market.[22] His first act was to sign in Chinese national team striker Gao Lin from Shanghai Shenhua for a reported fee of ¥6 million, then he replaced the head coach Peng Weiguo with former Beijing Guoan manager Lee Jang-Soo with no indication. In the 2010 summer transfer window, the club signed Sun Xiang, the first Chinese footballer to play in the UEFA Champions League with PSV Eindhoven, and Chinese national team captain Zheng Zhi on 28 June 2010. On 30 June 2010, Guangzhou confirmed that they had signed Muriqui on a four-year deal from Campeonato Brasileiro Série A side Atlético Mineiro with a domestic record fee of ¥23 million.[23] On 30 October 2010, Guangzhou became League One champions for the second time and returned to the Super League after a 3–1 win against Hunan Billows.[24]

During the 2011 season, Guangzhou Evergrande further strengthened its squad with the purchase of Argentinean Dario Conca and Brazilian Cléo.[25] Although the team was promoted to the Super League in the first year, they clinched the league title in late September 2011 although there were four games yet to play.[26] In March 2012, Guangzhou played and won their first ever AFC Champions League match, thrashing Korean champions Jeonbuk Hyundai Motors 5–1.[27] In addition, Paraguayan Lucas Barrios left the German champions Borussia Dortmund in the summer of 2012 to join Guangzhou Evergrande.[28] Marcello Lippi replaced Lee Jang-Soo as the head coach and brought in South Korean defender Kim Young-Gwon and Chinese midfielder Huang Bowen.[29] Guangzhou was knocked out of the 2012 AFC Champions League when they lost 5–4 on aggregate to Al-Ittihad in the quarterfinals.[30] They were the first Chinese side to reach the quarterfinals since 2006. During the 2012 season, Guangzhou won the league for the second time in a row, becoming the first team in China to win the Super League title twice in a row, while also securing the Chinese FA Cup and Super Cup to become double winners for 2012.[31]

In the 2013 season, Guangzhou Evergrande strengthened their squad by signing Chinese goalkeeper Zeng Cheng and Brazilian Elkeson.[32] This proved to be beneficial to Guangzhou as they became the first team in China to win the Super League three times in a row. The club also won the 2013 AFC Champions League in the final against FC Seoul, after drawing 2–2 in the first leg in Seoul and 1–1 in the second leg in Guangzhou, becoming the first Chinese side to win the tournament on the away goals rule.[33] By winning the AFC Champions League, Guangzhou was assured a place in the 2013 FIFA Club World Cup, entering in the quarterfinals, beating the African champions Al Ahly 2–0. In the semifinals, they were defeated by the European champions Bayern Munich 3–0. In the third place match, the club lost against South American champions Atlético Mineiro 3–2 and finished fourth place on the international stage.[34] Guangzhou won its fourth and fifth consecutive Chinese Super League titles in 2014 and 2015 respectively. On 21 November 2015, the club won its second continental championship, defeating Al Ahli 1–0 on aggregate in the 2015 AFC Champions League Final. In the 2015 FIFA Club World Cup, Guangzhou won 2-1 against Club América in the quarterfinals before losing 3-0 against Barcelona in the semifinals.[35] At the end, Guangzhou lost the third place match 2-1 against Hiroshima Sanfrecce, ending up in the same position as the 2013 FIFA Club World Cup.[36]

When professionalism was established within the Chinese football leagues in 1994, it opened the door for more than one team within each region. This saw the establishment of Guangzhou Matsunichi which used to be the youth academy of Guangzhou FC but were sold off to Matsunichi Digital Holdings Limited.[37] Direct ties between these two teams also saw them share the Yuexiushan Stadium. In their first meeting in the first round of the 1995 Chinese FA Cup, Matsunichi beat Guangzhou FC 4–3 on aggregate.[38] For a brief period during the 1998 season, both teams were in the top tier with Matsunichi finishing higher than Guangzhou FC; however, the rivalry would reach its peak and subsequent conclusion during the 2000 season with both clubs in the second tier fighting relegation. On 15 July 2000, Guangzhou FC won 3–1 against Matsunichi which inevitability helped lead to Matsunichi's relegation, causing Matsunichi to disband at the end of the season.[39][40]

When Guangzhou R&F moved to the city of Guangzhou, a local derby, often referred to as the Canton derby, was born.[41] The first Canton derby was at Yuexiushan Stadium on 16 March 2012 as Guangzhou Evergrande lost 2–0 against Guangzhou R&F.[42] Relations between the two club owners remain cordial off the pitch and club owners Xu Jiayin and Zhang Li were seen enjoying a meal together instead of watching the second derby in 2012 which Guangzhou R&F also won.[43][44]

Since 1994 the first professional league season. Correct as of 27 November 2016. Names in bold indicate players currently plays for Guangzhou.

Since 1994 the first professional league season. Correct as of 27 November 2016.

Record results in a season

Past and present internationals

Names in bold indicate players who had international appearances for their country while playing for Guangzhou.