Henry Bruce was born at Duffryn, Aberdare, Glamorganshire, the son of John Bruce, a Glamorganshire landowner, and his first wife Sarah, daughter of Reverend Hugh Williams Austin. John Bruce's original family name was Knight, but on coming of age in 1805 he assumed the name of Bruce: his mother, through whom he inherited the Duffryn estate, was the daughter of William Bruce, high sheriff of Glamorganshire.

Henry was educated from the age of twelve at the Bishop Gore School, Swansea (Swansea Grammar School). In 1837 he was called to the bar from Lincoln's Inn.[2] Shortly after he had begun to practice, the discovery of coal beneath the Duffryn and other Aberdare Valley estates brought his family great wealth.[3] From 1847 to 1854 Bruce was stipendiary magistrate for Merthyr Tydfil and Aberdare, resigning the position in the latter year, after entering parliament as Liberal member for Merthyr Tydfil.[4] 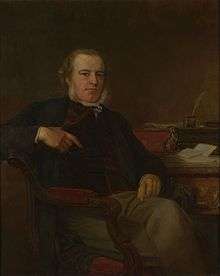 Bruce was returned unopposed as MP for Merthyr in December 1852, with the enthusiastic support of the late member's political allies, notably the iron masters of Dowlais, and he was thereafter regarded by his political opponents, most notably in the Aberdare Valley, as their nominee.[5] Even so, Bruce's parliamentary record demonstrated support for liberal policies, with the exception of the ballot.[6] The electorate in the constituency at this time remained relatively small, excluding the vast majority of the working classes.

Significantly, however, Bruce's relationship with the miners of the Aberdare Valley, in particular, deteriorated as a result of the Aberdare Strike of 1857-8.[7] In a speech to a large audience of miners at the Aberdare Market Hall, Bruce sought to strike a conciliatory tone in persuading the miners to return to work. In a second speech, however, he delivered a broadside against the trade union movement generally, referring to the violence engendered elsewhere as a result of strikes and to alleged examples of intimidation and violence in the immediate locality.[8] The strike damaged his reputation and may well have contributed to his eventual election defeat ten years later.

In 1855, Bruce was appointed a trustee of the Dowlais Iron Company and played a role in the further development of the iron industry.[2]

In November 1862, after nearly ten years in Parliament, he became Under-Secretary of State for the Home Department, and held that office until April 1864.[2] He became a Privy Councillor and a Charity Commissioner for England and Wales in 1864.[2]

At the 1868 General Election, Merthyr Tydfil became a two-member constituency with a much-increased electorate as a result of the Second Reform Act of 1867. Since the formation of the constituency, Merthyr Tydfil had dominated representation as the vast majority of the electorate lived in the town and its vicinity, whereas there was a much lower number of electors in the neighbouring Aberdare Valley.[9] During the 1850s and 1860s, however, the population of Aberdare grew rapidly, and the franchise changes in 1867 gave the vote to large numbers of miners in that valley. Amongst these new electors, Bruce, as noted above, remained unpopular as a result of his actions during the 1857 -8 dispute. Initially, it appeared that the Aberdare iron master, Richard Fothergill, would be elected to the second seat alongside Bruce. However, the appearance of a third Liberal candidate, Henry Richard, a nonconformist radical popular in both Merthyr and Aberdare, left Bruce on the defensive and he was ultimately defeated, finishing in third place behind both Richard and Fothergill.

After losing his seat, Bruce was elected for Renfrewshire, he was made Home Secretary by William Ewart Gladstone. His tenure of this office was conspicuous for a reform of the licensing laws, and he was responsible for the Licensing Act 1872, which made the magistrates the licensing authority, increased the penalties for misconduct in public-houses and shortened the number of hours for the sale of drink. In 1873 Bruce relinquished the home secretaryship, at Gladstone's request, to become Lord President of the Council, and was raised to the peerage as Baron Aberdare, of Duffryn in the County of Glamorgan, on 23 August that year.[3] 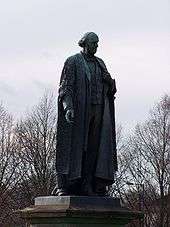 The defeat of the Liberal government in the following year terminated Lord Aberdare's official political life, and he subsequently devoted himself to social, educational and economic questions.

Education became one of Lord Aberdare's main interests in later life. His interest had been shown by the speech on Welsh education which he had made on 5 May 1862. In 1880, he was appointed to chair the Departmental Committee on Intermediate and Higher Education in Wales and Monmouthshire, whose report ultimately led to the Welsh Intermediate Education Act of 1889.[2] The report also stimulated the campaign for the provision of university education in Wales. In 1883, Lord Aberdare was elected the first president of the University College of South Wales and Monmouthshire.[2] In his inaugural address he declared that the framework of Welsh education would not be complete until there was a University of Wales. The University was eventually founded in 1893 and Aberdare became its first chancellor.[2]

In 1876 he was elected a Fellow of the Royal Society; from 1878 to 1891 he was president of the Royal Historical Society; and in 1881 he became president of both the Royal Geographical Society and the Girls' Day School Trust.[3] In 1888 he headed the commission that established the Official Table of Drops, listing how far a person of a particular weight should be dropped when hanged for a capital offence (the only method of 'judicial execution' in the United Kingdom at that time), to ensure an instant and painless death, by cleanly breaking the neck between the 2nd and 3rd vertebrae, an 'exacting science', eventually brought to perfection by Chief Executioner Albert Pierrepoint.

In 1882 he began a connection with West Africa which lasted the rest of his life, by accepting the chairmanship of the National African Company, formed by Sir George Goldie, which in 1886 received a charter under the title of the Royal Niger Company and in 1899 was taken over by the British government, its territories being constituted the protectorate of Nigeria. West African affairs, however, by no means exhausted Lord Aberdare's energies, and it was principally through his efforts that a charter was in 1894 obtained for the University College of South Wales and Monmouthshire,a constituent institution of the University of Wales. This is now Cardiff University. Lord Aberdare, who in 1885 was made a Knight Grand Cross of the Order of the Bath, presided over several Royal Commissions at different times.[3] 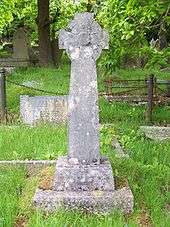 Henry Bruce married firstly Annabella, daughter of Richard Beadon, in 1846. They had one son and three daughters. After her death in July 1852 he married secondly Norah Creina Blanche, daughter of Sir William Napier, the historian of the Peninsular War, whose biography he edited.[10] They had seven daughters and two sons, of whom the youngest was the mountaineer Charles Granville Bruce. Their daughter Sarah was married to Montague Muir Mackenzie, barrister.[11]

Lord Aberdare died in London on 25 February 1895, aged 79, and was succeeded in the barony by his only son from his first marriage, Henry. Lady Aberdare, born 1827, died in April 1897[12] and was a proponent of women's education and active in the establishment of Aberdare Hall in Cardiff. 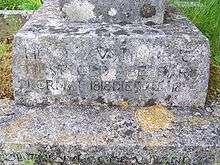 Henry Austin Bruce is buried at Aberffrwd Cemetery in Mountain Ash, Wales. His large family plot is surrounded by a chain, and his grave is a simple Celtic cross with double plinth and kerb. In place is written "To God the Judge of all and to the spirits of just men more perfect."