This is about the historiographical convention. See History of Anglo-Saxon England for a historical discussion and List of Anglo-Saxon kingdoms for a full list. 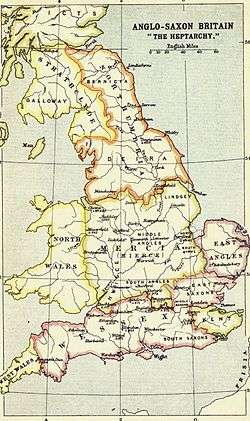 The Heptarchy, according to Bartholomew's A literary & historical atlas of Europe (1914)

The Heptarchy (from the Greek ἑπτά hepta, "seven" and ἄρχω arkho, "to rule") is a collective name applied to the Anglo-Saxon kingdoms of south, east and central England during late antiquity and the early Middle Ages, conventionally identified as seven: East Anglia, Essex, Kent, Mercia, Northumbria, Sussex and Wessex. The Anglo-Saxon kingdoms eventually unified into the Kingdom of England.

The term has been in use since the 16th century, but the initial idea that there were seven Anglo-Saxon kingdoms is attributed to the English historian Henry of Huntingdon in the 12th century and was first used in his Historia Anglorum.[1]

Definition and historicity of the concepts 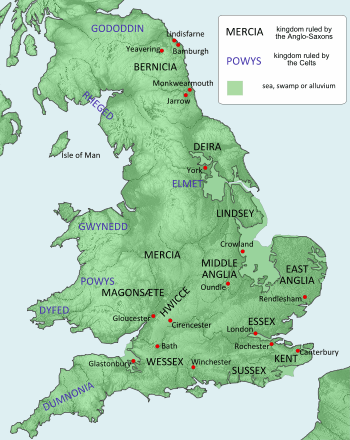 By convention, the Heptarchy lasted from the end of Roman rule in Britain in the 5th century, until most of the Anglo-Saxon kingdoms came under the overlordship of Egbert of Wessex in 829: a period of European history often referred to as the Early Middle Ages or, more controversially, as the Dark Ages.

Though heptarchy suggests the existence of seven kingdoms, the number fluctuated, as kings contended for supremacy at various times within the conventional period.[2] In the late 6th century, the king of Kent was a prominent lord in the south; in the 7th century, the rulers of Northumbria and Wessex were powerful; in the 8th century, Mercia achieved hegemony over the other surviving kingdoms, particularly with "Offa the Great". Yet, as late as the reigns of Eadwig and Edgar (955–75), it was still possible to speak of separate kingdoms within the English population.

In reality, the end of the Heptarchy was a gradual process. The 9th century Viking raids that led to the establishment of a Danish-controlled enclave at York, and ultimately to the Danelaw, gained considerable advantage from the petty rivalries between the old kingdoms. The need to unite against the common enemy was recognised, so that by the time Alfred of Wessex resisted the Danes in the late 9th century, he did so essentially as the leader of an Anglo-Saxon nation. Successive kings of Wessex (and especially Athelstan) progressively reinforced the English unitary state, until, with the simultaneous dissolution of Mercia and submission of Northumbria upon Edgar's succession in 959, the old constituent kingdoms in effect became consolidated into one.

Recent research has revealed that some of the Heptarchy kingdoms (notably Essex and Sussex) did not achieve the same status as the others. Conversely, there also existed alongside the seven kingdoms a number of other political divisions that played a more significant role than previously thought. Such were the kingdoms (or sub-kingdoms) of: Bernicia and Deira within Northumbria; Lindsey in present-day Lincolnshire; the Hwicce in the southwest Midlands; the Magonsæte or Magonset, a sub-kingdom of Mercia in what is now Herefordshire; the Wihtwara, a Jutish kingdom on the Isle of Wight, originally as important as the Cantwara of Kent; the Middle Angles, a group of tribes based around modern Leicestershire, later conquered by the Mercians; the Hæstingas (around the town of Hastings in Sussex); and the Gewisse, a Saxon tribe in what is now southern Hampshire that later developed into the kingdom of Wessex.

Certainly the term Heptarchy has been considered unsatisfactory since the early 20th century and many professional historians no longer use it, feeling that it does not accurately describe the period to which it refers. However, it is still sometimes used as a label of convenience for a phase in the development of England.

The four main kingdoms in Anglo-Saxon England were:

The other main kingdoms, which were conquered by others entirely at some point in their history, are:

Other minor kingdoms and territories include:

Arms were attributed to the kingdoms of the Anglo-Saxon heptarchy in the modern period (the historical kingdoms disappeared long before the emergence of heraldry).

The Kingdom of Essex, for instance, was assigned a red shield with three notched swords (or "seaxes"). This coat was used by the counties of Essex and Middlesex until 1910, when the Middlesex County Council applied for a formal grant from the College of Arms (The Times, 1910). Middlesex was granted a red shield with three notched swords and a "Saxon Crown". Essex County Council was granted the arms without the crown in 1932.