The Tudor period is the period between 1485 and 1603 in England and Wales and includes the Elizabethan period which ends with the completion of the reign of Elizabeth I in 1603. The Tudor period coincides with the rule of the Tudor dynasty in England whose first monarch was Henry VII (1457–1509). In terms of the entire century, Guy (1988) argues that "England was economically healthier, more expansive, and more optimistic under the Tudors" than at any time in a thousand years.[1]

Following the Black Death and the agricultural depression of the late 15th century, population began to increase. The export of woollen products resulted in an economic upturn with products exported to mainland Europe. Henry VII negotiated the favourable Intercursus Magnus treaty in 1496.[2]

The high wages and abundance of available land seen in the late 15th century and early 16th century were replaced with low wages and a land shortage. Various inflationary pressures, perhaps due to an influx of New World gold and a rising population, set the stage for social upheaval with the gap between the rich and poor widening. This was a period of significant change for the majority of the rural population, with manorial lords beginning the process of enclosure.[3]

Historian Geoffrey Elton revolutionized the study of Tudor government with his 1953 book The Tudor Revolution in Government. He argued that Thomas Cromwell, who was Henry VIII's chief minister from 1532 to 1540, was the author of modern, bureaucratic government, which replaced medieval, government-as-household-management. Cromwell introduced reforms into the administration that delineated the King's household from the state and created a modern administration. He injected Tudor power into the darker corners of the realm and radically altered the role of Parliament. This transition happened in the 1530s, Elton argued, and must be regarded as part of a planned revolution. Elton's point was that before Cromwell the realm could be viewed as the King's private estate writ large, where most administration was done by the King's household servants rather than separate state offices. By masterminding these reforms, wrote Elton, Cromwell laid the foundations of England's future stability and success.[4] However, Elton's thesis has been challenged by more recent historians and can no longer be regarded as an orthodoxy.[5]

The Tudor Government raised a huge amount of revenue from the Dissolution of the Monasteries. The clerical income from First Fruits and Tenths, which previously went to the Pope, now went to the King. The Tudor Government gained further revenue from the clerical lands by receiving rents from confiscated lands and by selling the lands. Altogether, between 1536 and Henry's death, the Government collected £1.3 million; this huge influx of money caused Cromwell to change the Crown's financial system to manage the money. He created a new department of state and a new official to collect the proceeds of the dissolution and the First Fruits and Tenths. The Court of Augmentations and number of departments meant a growing number of officials, which made the management of revenue troublesome and expensive.[6]

Partly because of the new revenue raised from the dissolution of monasteries, Cromwell created revenue courts to allot the royal income properly to various departments. These were the six courts or departments of state, each fully organised with its own specialised officials, equipped with seals and habitat, and responsible for a particular kind of revenue. Although this new financial system did not work with admirable precision, it was an improvement in that it did not involve the excessive formality of the old Exchequer or the excessive informality of the chamber system. Its drawback was the multiplication of departments whose sole unifying agent was Cromwell; his fall raised difficulties necessitating further reforms, which, however, followed his principle of relying on bureaucratic institutions.[7]

The growing number of departments meant that the number of officials involved increased, which made the management of revenue troublesome and expensive. There were further financial and administrative difficulties in 1540–58, aggravated by war, debasement, corruption and inefficiency, which were mainly caused by Somerset. After Cromwell's fall, Winchester, the Lord Treasurer, produced further reforms to simplify the arrangements, reforms which united most of the crown's finance under the exchequer. The courts of general surveyors and augmentations were fused into a new Court of Augmentations, and this was later absorbed into the exchequer along with the First Fruits and Tenths.[8]

Henry's war and Somerset's war with France and Scotland cost England huge sums of money. Since 1540, the Privy Coffers were responsible for 'secret affairs', in particular for the financing of war. The Royal Mint was used to generate revenue by debasing the coinage; the government's profit in 1547–51 was £537,000. Most of the money that was raised from the dissolution was squandered on the Boulogne campaign of 1544. However, under the rule of Northumberland, the wars were brought to an end, and the Mint no longer generated revenue after debasement was brought to an end in 1551.[9]

Significant events of the period 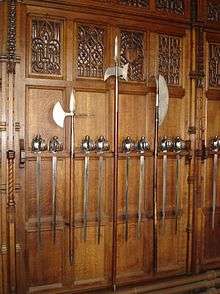 In 1487 Henry VII's enemies from the House of York had crowned a pretender and landed a small army off the coast of Lancashire with the intention of stealing the crown. Henry VII defeated them at East Stoke.[10] This was the last important battle in the Wars of the Roses.[11]

The Reformation transformed English religion during the Tudor period. It began as a result of Henry VIII's grievance at Pope Clement VII regarding his refusal to grant an annulment. It ended with the Church of England breaking away from Rome, and coming under royal control, while keeping many of the rituals that hard-line Protestants opposed.[12]

There were numerous popular uprisings; all were suppressed. The largest began in 1549; it was at first intended as a demonstration against enclosures of common land. The instigator, Robert Kett, was executed for treason.[13]

Daily life in the period

A woodcut from circa 1536 depicting a vagrant being punished in the streets in Tudor England.

About one-third of the population lived in poverty, with the wealthy expected to give alms to assist the impotent poor.[14] Tudor law was harsh on the able-bodied poor, i.e., those unable to find work. Those who left their parishes in order to locate work were termed vagabonds and could be subjected to punishments, including whipping and putting at the stocks.[15][16]

The idea of the workhouse for the able-bodied poor was first suggested in 1576.[17]

Although home to only a small part of the population the Tudor municipalities were overcrowded and unhygienic. Most towns were unpaved with poor public sanitation. There were no sewers or drains, and garbage was simply abandoned in the street. Animals such as rats thrived in these conditions. In larger towns and cities, such as London, common diseases arising from lack of sanitation included smallpox, measles, malaria, typhus, diphtheria, Scarlet fever, and chickenpox.[18]

The majority of the population lived in small villages. Their homes were, as in earlier centuries, thatched huts with one or two rooms, although later on during this period, roofs were also tiled. Furniture was basic, with stools being commonplace rather than chairs.[18] The walls of Tudor houses were often made from timber and wattle and daub, or brick; stone and tiles were more common in the wealthier homes. The daub was usually then painted with limewash, making it white, and the wood was painted with black tar to prevent rotting, but not in Tudor times; the Victorians did this afterwards. The bricks were handmade and thinner than modern bricks. The wooden beams were cut by hand, which makes telling the difference between Tudor houses and Tudor-style houses easy, as the original beams are not straight. The upper floors of Tudor houses were often larger than the ground floors, which would create an overhang (or jetty). This would create more floor-surface above while also keeping maximum street width. During the Tudor period, the use of glass when building houses was first used, and became widespread. It was very expensive and difficult to make, so the panes were made small and held together with a lead lattice, in casement windows. People who could not afford glass often used polished horn, cloth or even paper. Tudor chimneys were tall, thin, and often decorated with symmetrical patterns of molded or cut brick. Early Tudor houses, and the homes of poorer people, did not have chimneys. The smoke in these cases would be let out through a simple hole in the roof.

Mansions had many chimneys for the many fireplaces required to keep the vast rooms warm. These fires were also the only way of cooking food. Wealthy Tudor homes needed many rooms, where a large number of guests and servants could be accommodated, fed and entertained. Wealth was demonstrated by the extensive use of glass. Windows became the main feature of Tudor mansions, and were often a fashion statement. Mansions were often designed to a symmetrical plan; "E" and "H" shapes were popular.[22]

There was an unprecedented expansion of education in the Tudor period. Until then, few children went to school.[23] Those that did go were mainly the sons of wealthy or ambitious fathers who could afford to pay the attendance fee. Boys were allowed to go to school and began at the age of 4, they then moved to grammar school when they were 7 years old. Girls were either kept at home by their parents to help with housework or sent out to work to bring money in for the family. They were not sent to school. Boys were educated for work and the girls for marriage and running a household so when they got married they could look after the house and children.[24] Wealthy families hired a tutor to teach the boys at home. Many Tudor towns and villages had a parish school where the local vicar taught boys to read and write. Brothers could teach their sisters these skills. At school, pupils were taught English, Latin, Greek, catechism and arithmetic. The pupils practiced writing in ink by copying the alphabet and the Lord's Prayer. There were few books, so pupils read from hornbooks instead. These wooden boards had the alphabet, prayers or other writings pinned to them and were covered with a thin layer of transparent cow's horn. There were two types of school in Tudor times: petty school was where young boys were taught to read and write; grammar school was where upscale boys were taught English and Latin.[25] It was usual for students to attend six days a week. The school day started at 7:00 am in winter and 6:00 am in summer and finished about 5:00 pm. Petty schools had shorter hours, mostly to allow poorer boys the opportunity to work as well. Schools were harsh and teachers were very strict, often beating pupils who misbehaved.[26]

Henry VIII shut the monasteries and their schools, and the overall level of schooling declined. He refounded many former monastic schools—they are known as "King's schools" and are found all over England. During the reign of Edward VI many free grammar schools were set up to take in non-fee paying students. There were two universities in Tudor England: Oxford and Cambridge. Some boys went to university at the age of about 14.[27]

Watching plays became very popular during the Tudor period. This popularity was helped by the rise of great playwrights such as William Shakespeare and Christopher Marlowe as well as the building of the Globe Theatre in London. By 1595, 15,000 people a week were watching plays in London. It was during Elizabeth's reign that the first real theatres were built in England. Before theatres were built, actors travelled from town to town and performed in the streets or outside inns.[28] The rich enjoyed tennis, fencing, jousting and hunting as well as hawking.

The House of Tudor produced five monarchs who ruled during this period.