The House of Windsor is the royal house of the United Kingdom and the other Commonwealth realms. The dynasty is of German paternal descent and was originally a branch of the House of Saxe-Coburg and Gotha, itself derived from the House of Wettin, which succeeded the House of Hanover as monarchs in the British Empire following the death of Queen Victoria, wife of Albert, Prince Consort. The houses of Saxe-Coburg and Gotha and Windsor have provided five British monarchs to date, including four kings and the present queen, Elizabeth II.

The name was changed from Saxe-Coburg and Gotha to the English Windsor in 1917 because of anti-German sentiment in the British Empire during World War I.[1] During the reign of the Windsors, major changes took place in British society. The British Empire participated in the First and Second World Wars, ending up on the winning side both times, but subsequently lost its status as a superpower during decolonisation. Much of Ireland broke with the United Kingdom and the remnants of the Empire became the Commonwealth of Nations.

The current head of the house is monarch of sixteen sovereign states. These are the United Kingdom (where they are based), Canada, Australia, New Zealand, Jamaica, Barbados, the Bahamas, Grenada, Papua New Guinea, Solomon Islands, Tuvalu, Saint Lucia, Saint Vincent and the Grenadines, Belize, Antigua and Barbuda, and Saint Kitts and Nevis. As well as these separate monarchies, there are also three Crown dependencies, fourteen British Overseas Territories and two associated states of New Zealand. 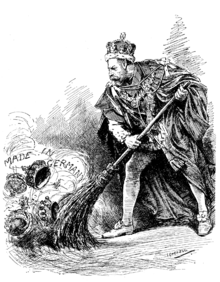 "A Good Riddance"; cartoon from Punch, Vol. 152, 27 June 1917, commenting on the King's order to relinquish all German titles held by members of his family

Edward VII and, in turn, his son, George V, were members of the German ducal House of Saxe-Coburg and Gotha by virtue of their descent from Albert, Prince Consort, husband of Queen Victoria. High anti-German sentiment amongst the people of the British Empire during World War I reached a peak in March 1917, when the Gotha G.IV, a heavy aircraft capable of crossing the English Channel, began bombing London directly and became a household name. In the same year, on 15 March, King George's first cousin, Nicholas II, the Emperor of Russia, was forced to abdicate, which raised the spectre of the eventual abolition of all the monarchies in Europe. The King and his family were finally convinced to abandon all titles held under the German Crown and to change German titles and house names to anglicised versions. Hence, on 17 July 1917, a royal proclamation issued by George V declared:

Now, therefore, We, out of Our Royal Will and Authority, do hereby declare and announce that as from the date of this Our Royal Proclamation Our House and Family shall be styled and known as the House and Family of Windsor, and that all the descendants in the male line of Our said Grandmother Queen Victoria who are subjects of these Realms, other than female descendants who may marry or may have married, shall bear the said Name of Windsor....[2]

The name had a long association with monarchy in Britain, through the town of Windsor, Berkshire, and Windsor Castle; the link is alluded to in the Round Tower of Windsor Castle being the basis of the badge of the House of Windsor. From 1917 to 1919, George V also stripped 15 of his German relations—most of whom belonged to the House of Hanover—of their British titles and styles of prince and princess.

Upon hearing that his cousin had changed the name of the British royal house to Windsor and in reference to Shakespeare's The Merry Wives of Windsor, German Emperor Wilhelm II remarked jokingly that he planned to see "The Merry Wives of Saxe-Coburg-Gotha".[3]

This table sets out the monarchs from the Houses of Saxe-Coburg and Gotha, and of Windsor.

The 1917 proclamation stated that the name of the Royal House and all British descendants of Victoria and Albert in the male line were to bear the name of Windsor, except for women who married into other families.

By early 1919 the living male-line British descendants of Victoria subject to British rule were King George V, his five sons, his daughter Princess Mary, his unmarried sister Princess Victoria, his uncle Prince Arthur, Duke of Connaught and Strathearn, his cousin Prince Arthur of Connaught, his cousin once removed Prince Alastair of Connaught, and his unmarried cousin Princess Patricia of Connaught. Prince Alastair and Princess Victoria died unmarried and childless. Princess Mary married into the Lascelles family, and Princess Patricia married Alexander Ramsay. Neither of the Prince Arthurs had any further children, meaning all subsequent members of the House of Windsor descend from the sons of George V.

Two of George V's sons, Edward VIII (later Duke of Windsor) and Prince John, had no children, so the entire present day members of the House of Windsor are descendants of the other three sons, Prince Albert, Duke of York (later George VI), Prince Henry, Duke of Gloucester, and Prince George, Duke of Kent.

In 1947, Princess Elizabeth (now Queen Elizabeth II), heir presumptive to King George VI, married Philip Mountbatten. He was a member of the House of Schleswig-Holstein-Sonderburg-Glücksburg, a branch of the House of Oldenburg, and had been a prince of Greece and Denmark. However, Philip, a few months before his marriage, abandoned his princely titles and adopted the surname Mountbatten, which was that of his uncle and mentor, the Earl Mountbatten of Burma, and had itself been adopted by Lord Mountbatten's father (Philip's maternal grandfather), Prince Louis of Battenberg, in 1917. It is the literal translation of the German battenberg, which refers to Battenberg, a small town in Hesse.

Soon after Elizabeth became Queen in 1952, Lord Mountbatten observed that because it was the standard practice for the wife in a marriage to adopt her husband's surname, the royal house had become the House of Mountbatten. When Elizabeth's grandmother, Queen Mary, heard of this comment, she informed British Prime Minister Winston Churchill and he later advised the Queen to issue a royal proclamation declaring that the royal house was to remain known as the House of Windsor. This she did on 9 April 1952, officially declaring it her "Will and Pleasure that I and My children shall be styled and known as the House and Family of Windsor, and that my descendants who marry and their descendants, shall bear the name of Windsor."[4] Philip privately complained, "I am nothing but a bloody amoeba. I am the only man in the country not allowed to give his name to his own children."[5]

On 8 February 1960, after the death of Queen Mary and the resignation of Churchill, the Queen confirmed that she and her children would continue to be known as the House and Family of Windsor, as would any agnatic descendants who enjoy the style of Royal Highness and the title of Prince or Princess.[4] Still, Elizabeth also decreed that her agnatic descendants who do not have that style and title would bear the surname Mountbatten-Windsor.[4]

This came after some months of correspondence between the Prime Minister Harold Macmillan and the constitutional expert Edward Iwi. Iwi had raised the prospect that the Royal child due to be born in February 1960 would bear "the Badge of Bastardy" if it were given its mother's maiden name (Windsor) rather than its father's name (Mountbatten). Macmillan had attempted to rebuff Iwi, until the Queen advised the acting Prime Minister Rab Butler in January 1960 that for some time she had had her heart set on a change that would recognise the name Mountbatten. She clearly wished to make this change before the birth of her child. The issue did not affect Prince Charles or Princess Anne, as they had been born with the name Mountbatten, before the Queen's accession to the throne.[6] Prince Andrew was born 11 days later, on 19 February 1960.

At the creation of the House of Windsor, its head reigned over a unitary British Empire. Following the end of the First World War, however, shifts took place that saw the emergence of the Dominions as sovereign states, the first step being the issuance of the Balfour Declaration in 1926, followed by the Royal and Parliamentary Titles Act the next year, and the Statute of Westminster in 1931. From then on, the House of Windsor became the royal house of multiple countries, a number that shifted over the decades, as some Dominions became republics and Crown colonies became realms, republics, or monarchies under a different sovereign. Since 1949, two monarchs of the House of Windsor, George VI and Elizabeth II, have also been Head of the Commonwealth of Nations, comprising most (but not all) parts of the former British Empire and some states that were never part of it.