Mary, Princess Royal and Countess of Harewood (Victoria Alexandra Alice Mary; 25 April 1897 – 28 March 1965) was a member of the British Royal Family; she was the third child and only daughter of King George V and Queen Mary.

Princess Mary was born at York Cottage on the Sandringham Estate in Norfolk, England. Her parents were the then Duke and Duchess of York. Her father was the eldest surviving son of the then Prince and Princess of Wales.

Mary was named after her paternal great-grandmother (who would have preferred that she be christened 'Diamond' rather than Victoria, because she was born during the Queen's Diamond Jubilee year);[1][2] her paternal grandmother, the Princess of Wales; and her maternal grandmother, the Duchess of Teck. Since she had the same birthday as her deceased greataunt Alice, Grand Duchess of Hesse and by Rhine, the name Alice was added in. She was always known by the last of her Christian names, Mary. She was fifth in the line of succession at the time of her birth.

Her baptism took place at St Mary Magdalene's Church near Sandringham on 7 June 1897 by William Dalrymple Maclagan, Archbishop of York. Her godparents were: The Queen (her great-grandmother); the King of the Hellenes (her great-uncle); the Dowager Empress of Russia (her paternal great-aunt); the Prince and Princess of Wales (her paternal grandparents); the Duchess of Teck (her maternal grandmother); Princess Victoria of Wales (her paternal aunt); and Prince Francis of Teck (her maternal uncle).[3]

Princess Mary was educated by governesses, but shared some lessons with her brothers, Prince Edward (later Edward VIII), Prince Albert (later George VI), and Prince Henry (later Duke of Gloucester, whose birth was the first of many that saw her superseded in the line of succession). She became fluent in German and French and developed a lifelong interest in horses and horse racing. Princess Mary and her husband Lord Harewood regularly rode with the Bramham Moor Hunt where he was Master of the Hunt.[4] Her first state appearance was at the coronation of her parents at Westminster Abbey on 22 June 1911.

During World War I, Princess Mary visited hospitals and welfare organizations with her mother; assisting with projects to give comfort to British servicemen and assistance to their families. One of these projects was Princess Mary's Christmas Gift Fund, through which £100,000 worth of gifts was sent to all British soldiers and sailors for Christmas, 1914. This initiative was revived in 2005 by the charity uk4u-Thanks!. She took an active role in promoting the Girl Guide movement, the VADs, and the Land Girls. In June 1918, following an announcement in The Gentlewoman, she began a nursing course at the Great Ormond Street Hospital, working two days a week in the Alexandra Ward.[5] 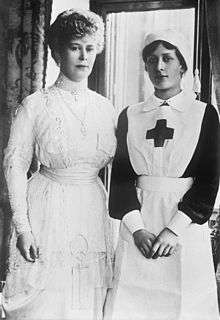 In the period leading up to her marriage, girls and women in the British Empire called Mary and its variants (including Marie, May and Miriam) banded together to form "The Marys of the Empire," and donated money toward a wedding present.[6][7] This fund she presented to the Girl Guides Association for the purchase of Foxlease, and following the exhibition of her wedding presents, she also contributed half the proceeds to the same cause, for upkeep, a total of £10,000, which enabled the project to go ahead.[8][9]

She became honorary president of the British Girl Guide Association in 1920, a position she held until her death. It was reported in July 2013 that British Pathe had discovered newsreel film from 1927 in which the ancestors of Catherine, Duchess of Cambridge are, as Lord Mayors of Leeds, playing host to Princess Mary at the Young Women's Christian Association in Hunslet, Leeds; both Sir Charles Lupton and his brother Hugh Lupton, were the uncles of Olive Middleton - the Duchess's great grandmother.[10][11][12] In 1926, Princess Mary became the commandant-in-chief of the British Red Cross Detachments.[13]

She was patron of the Leeds Triennial Musical Festival for many years. By the 1940s, Princess Mary was attending the opening nights and many of the festival's performances, as was her son, George, and his wife, the Countess of Harewood, née Marion Stein, a former concert pianist.[14][15] George was a noted music critic whose career included the role of artistic director of the Leeds Triennial Musical Festival.[16] 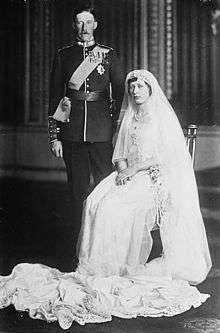 A 1922 wedding portrait of Princess Mary and Viscount Lascelles.

On 28 February 1922, Princess Mary married Viscount Lascelles (9 September 1882 – 23 May 1947), the elder son of the then Earl of Harewood, and Lady Florence Bridgeman, daughter of Orlando Bridgeman, 3rd Earl of Bradford of Weston Park. Their wedding at Westminster Abbey was the first royal occasion in which the future Queen Elizabeth (wife of King George VI and mother of Queen Elizabeth II), a friend of Princess Mary and one of the bridesmaids, participated. The Princess was 24, Lord Lascelles was 39.

It was later reported that she did not want to marry Lord Lascelles, that her parents forced her into an arranged marriage, and that Lascelles proposed to her after a wager at his club. Her brother, the Prince of Wales, later King Edward VIII, to whom she was very close, was against the marriage because he did not want his sister to marry someone whom she did not love. Her elder son, the Earl of Harewood, however, writes about his parents' marriage in his memoirs The Tongs and the Bones and challenges these widespread rumours that the marriage was an unhappy one. He says that "they got on well together and had a lot of friends and interests in common".

The Princess and her husband had homes in London, Chesterfield House and in Yorkshire, first Goldsborough Hall, and later Harewood House. While at Goldsborough Hall, Princess Mary had internal alterations made by the architect Sydney Kitson, to suit the upbringing of her two children and instigated the development of formal planting of beech-hedge-lined long borders from the south terrace looking for a quarter of a mile down an avenue of lime trees. The limes were planted by her relatives as they visited the Hall throughout the 1920s, including her father George V and her mother Queen Mary.

On 25 March 1923, her first son George was christened at St Mary's Church, which adjoins Goldsborough Hall by Cosmo Lang, Archbishop of York. The service was attended by King George V and Queen Mary. After becoming the Countess of Harewood on the death of her father-in-law, Princess Mary moved to Harewood House and took a keen interest in the interior decoration and renovation of the Lascelles family's seat. In farming pursuits, Princess Mary also became an expert in cattle breeding. 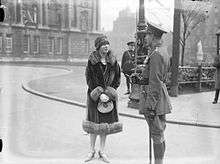 The Princess Royal on a visit to Belfast City Hall, 13 October 1928

On 6 October 1929, Lord Lascelles, who had been created a Knight of the Garter upon his marriage, succeeded his father as 6th Earl of Harewood, Viscount Lascelles, and Baron Harewood. The couple's elder son assumed the courtesy title of Viscount Lascelles. On 1 January 1932, George V declared that his only daughter should bear the title Princess Royal, succeeding her aunt Princess Louise, Duchess of Fife who had died a year before.[18]

The Princess Royal was particularly close to her eldest brother, the Prince of Wales, who subsequently became Edward VIII (who was known as David to his family). After the abdication crisis, she and her husband went to stay with the former Edward VIII, by then created Duke of Windsor, at Enzenfeld Castle near Vienna. Later, in November 1947, she allegedly declined to attend the wedding of her niece, The Princess Elizabeth, to Lieutenant Philip Mountbatten to protest the fact that the Duke of Windsor had not been invited. She gave ill health as the official reason for her non-attendance.[19] The Duke of Windsor was however invited to the weddings of Princess Margaret and Princess Alexandra of Kent, his nieces, but out of bitterness he refused to attend. 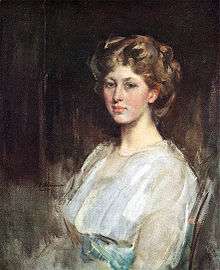 At the outbreak of World War II, the Princess Royal became chief controller and later controller commandant of the Auxiliary Territorial Service (ATS, renamed the Women's Royal Army Corps in 1949). In that capacity she travelled Britain visiting its units, as well as wartime canteens and other welfare organisations. On the death of her younger brother, the Duke of Kent, she became the president of Papworth. The Princess Royal became air chief commandant of Princess Mary's Royal Air Force Nursing Service in 1950 and received the honorary rank of general in the British Army in 1956. Also, in 1949, the 10th Gurkha Rifles were renamed the 10th Princess Mary's Own Gurkha Rifles in her honour.

After her husband's death in 1947, the Princess Royal lived at Harewood House with her elder son and his family. She became the chancellor of the University of Leeds in 1951, and continued to carry out official duties at home and abroad. She attended the coronation of Queen Elizabeth II in June 1953 and later represented the Queen at the independence celebrations of Trinidad and Tobago in 1962, and Zambia in 1964. One of her last official engagements was to represent the Queen at the funeral of Queen Louise of Sweden in early March 1965.

The Princess Royal also made history that same month of March 1965, when she visited her brother, the Duke of Windsor (formerly King Edward VIII) at the London Clinic, where he was recovering from recent eye surgery. The Princess also met her brother's wife, the Duchess of Windsor (at that time, married to the Duke for more than 28 years), one of the Duchess' few meetings with her husband's immediate family up to that time. A few days later, the Queen also visited the Duke of Windsor, and she accepted the presence of the Duchess, who curtsied to her — the first time that a member of the Royal Family had officially received the Duke's wife.

On 28 March 1965 the Princess Royal suffered a fatal heart attack during a walk with her elder son, Lord Harewood, and his children in the grounds of the Harewood House estate. She was 67 years old. She was buried at Harewood after a private family funeral at York Minster. 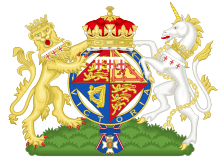 In 1931, Princess Mary, Princess Royal and Countess of Harewood was awarded her own personal arms, being the royal arms, differenced by a label argent of three points, each bearing a cross gules[22]