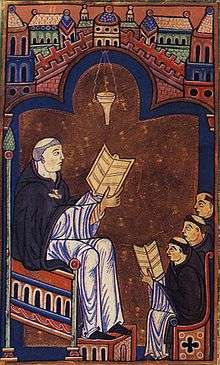 As with many medieval figures, little is known about Hugh's early life. He was probably born in the 1090s. His homeland may have been Lorraine, Ypres in Flanders, or the Duchy of Saxony.[1] Some sources say that his birth occurred in the Harz district, being the eldest son of Baron Conrad of Blankenburg. Over the protests of his family, he entered the Priory of St. Pancras, a community of canons regular, where he had studied, located at Hamerleve, near Halberstadt.[2]

Due to civil unrest shortly after his entry to the priory, Hugh's uncle, Reinhard of Blankenburg, who was the local bishop, advised him to transfer to the Abbey of Saint Victor in Paris, where he himself had studied theology. He accepted his uncle's advice and made the move at a date which is unclear, possibly 1115-18 or around 1120.[3] He spent the rest of his life there, advancing to head the school.[2]

Hugh wrote many works from the 1120s until his death (Migne, Patrologia Latina contains 46 works by Hugh, and this is not a full collection), including works of theology (both treatises and sententiae), commentaries (mostly on the Bible but also including one of pseudo-Dionysius' Celestial Hierarchies), mysticism, philosophy and the arts, and a number of letters and sermons.[4]

Hugh was influenced by many people, but chiefly by Saint Augustine, especially in holding that the arts and philosophy can serve theology.

Hugh's most significant works include:

Other works by Hugh of St Victor include:

Various other works were wrongly attributed to Hugh in later thought. One such particularly influential work was the Exposition of the Rule of St Augustine, now accepted to be from the Victorine school but not by Hugh of St Victor.[24]

The early Didascalicon was an elementary, encyclopedic approach to God and Christ, in which Hugh avoided controversial subjects and focused on what he took to be commonplaces of Catholic Christianity. In it he outlined three types of philosophy or "science" [scientia] that can help mortals improve themselves and advance toward God: theoretical philosophy (theology, mathematics, physics) provides them with truth, practical philosophy (ethics, economics, politics) aids them in becoming virtuous and prudent, and "mechanical" or "illiberal" philosophy (e.g., carpentry, agriculture, medicine) yields physical benefits. A fourth philosophy, logic, is preparatory to the others and exists to ensure clear and proper conclusions in them. Hugh's deeply mystical bent did not prevent him from seeing philosophy as a useful tool for understanding the divine, or from using it to argue on behalf of faith.

Hugh was heavily influenced by Augustine's exegesis of Genesis. Divine Wisdom was the archetypal form of creation. The creation of the world in six days was a mystery for man to contemplate, perhaps even a sacrament. God's forming order from chaos to make the world was a message to humans to rise up from their own chaos of ignorance and become creatures of Wisdom and therefore beauty. This kind of mystical-ethical interpretation was typical for Hugh, who tended to find Genesis interesting for its moral lessons rather than as a literal account of events.

Along with Jesus, the sacraments were divine gifts that God gave man to redeem himself, though God could have used other means. Hugh separated everything along the lines of opus creationis and opus restaurationis. Opus Creationis was the works of the creation, referring to God's creative activity, the true good natures of things, and the original state and destiny of humanity. The opus restaurationis was that which dealt with the reasons for God sending Jesus and the consequences of that. Hugh believed that God did not have to send Jesus and that He had other options open to Him. Why he chose to send Jesus is a mystery we are to meditate on and is to be learned through revelation, with the aid of philosophy to facilitate understanding.

Within the Abbey of St Victor, many scholars who followed him are often known as the 'School of St Victor'. Both Achard and Andrew of St Victor appear to have been direct disciples of Hugh. Others, who probably entered the community too late to be directly educated by Hugh, include Richard of Saint Victor and Godfrey.[25] One of Hugh's ideals that did not take root in St Victor, however, was his embrace of science and philosophy as tools for approaching God.

His works are in hundreds of libraries all across Europe. He is quoted in many other publications after his death, and Bonaventure praises him in De reductione artium ad theologiam.

He was also an influence on the critic Edward Said, who cited this passage from Hugh of St Victor in numerous published works:

It is therefore, a source of great virtue for the practiced mind to learn, bit by bit, first to change about in visible and transitory things, so that afterwards it may be able to leave them behind altogether. The person who finds his homeland sweet is a tender beginner; he to whom every soil is as his native one is already strong; but he is perfect to whom the entire world is as a foreign place. The tender soul has fixed his love on one spot in the world; the strong person has extended his love to all places; the perfect man has extinguished his.