This article is about the Italian medieval theologian. For other uses, see Bonaventure (disambiguation).

Saint Bonaventure (Italian: San Bonaventura; 1221 – 15 July 1274),[1] born Giovanni di Fidanza, was an Italian medieval Franciscan, scholastic theologian and philosopher. The seventh Minister General of the Order of Friars Minor, he was also a Cardinal Bishop of Albano. He was canonised on 14 April 1482 by Pope Sixtus IV and declared a Doctor of the Church in the year 1588 by Pope Sixtus V. He is known as the "Seraphic Doctor" (Latin: Doctor Seraphicus). Many writings believed in the Middle Ages to be his are now collected under the name Pseudo-Bonaventura.

He was born at Bagnorea in Tuscany, not far from Viterbo, then part of the Papal States. Almost nothing is known of his childhood, other than the names of his parents, Giovanni di Fidanza and Maria Ritella.[2][3]

He entered the Franciscan Order in 1243 and studied at the University of Paris, possibly under Alexander of Hales, and certainly under Alexander's successor, John of Rochelle.[4] In 1253 he held the Franciscan chair at Paris. Unfortunately for Bonaventure, a dispute between seculars and mendicants delayed his reception as Master until 1257, where his degree was taken in company with Thomas Aquinas.[5] Three years earlier his fame had earned him the position of lecturer on the The Four Books of Sentences—a book of theology written by Peter Lombard in the twelfth century—and in 1255 he received the degree of master, the medieval equivalent of doctor.[4]

After having successfully defended his order against the reproaches of the anti-mendicant party, he was elected Minister General of the Franciscan Order. On 24 November 1265, he was selected for the post of Archbishop of York; however, he was never consecrated and resigned the appointment in October 1266.[6]

During his tenure, the General Chapter of Narbonne, held in 1260, promulgated a decree prohibiting the publication of any work out of the order without permission from the higher superiors. This prohibition has induced modern writers to pass severe judgment upon Roger Bacon's superiors being envious of Bacon's abilities. However, the prohibition enjoined on Bacon was a general one, which extended to the whole order. Its promulgation was not directed against him, but rather against Gerard of Borgo San Donnino. Gerard had published in 1254 without permission a heretical work, Introductorius in Evangelium æternum (An Introduction to the Eternal Gospel). Thereupon the General Chapter of Narbonne promulgated the above-mentioned decree, identical with the "constitutio gravis in contrarium" Bacon speaks of. The above-mentioned prohibition was rescinded in Roger's favour unexpectedly in 1266.[7] 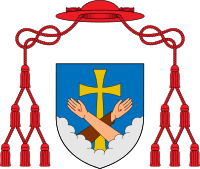 Bonaventure's Coat of arms of Cardinal Bishop of Albano

Bonaventure was instrumental in procuring the election of Pope Gregory X, who rewarded him with the title of Cardinal Bishop of Albano, and insisted on his presence at the great Second Council of Lyon in 1274.[4] There, after his significant contributions led to a union of the Greek and Latin churches, Bonaventure died suddenly and in suspicious circumstances. The 1913 edition of the Catholic Encyclopedia has citations that suggest he was poisoned, but no mention is made of this in the 2003 second edition of the New Catholic Encyclopedia. The only extant relic of the saint is the arm and hand with which he wrote his Commentary on the Sentences, which is now conserved at Bagnoregio, in the parish church of St. Nicholas.[8]

He steered the Franciscans on a moderate and intellectual course that made them the most prominent order in the Catholic Church until the coming of the Jesuits. His theology was marked by an attempt completely to integrate faith and reason. He thought of Christ as the "one true master" who offers humans knowledge that begins in faith, is developed through rational understanding, and is perfected by mystical union with God.[9]

Bonaventure's feast day was included in the General Roman Calendar immediately upon his canonisation in 1482. It was at first celebrated on the second Sunday in July, but was moved in 1568 to 14 July, since 15 July, the anniversary of his death, was at that time taken up with the feast of Saint Henry. It remained on that date, with the rank of "double", until 1960, when it was reclassified as a feast of the third class. In 1969 it was classified as an obligatory memorial and assigned to the date of his death, 15 July.[10]

His works, as arranged in the most recent Critical Edition by the Quaracchi Fathers (Collegio S. Bonaventura), consist of a Commentary on the Sentences of Lombard, in four volumes, and eight other volumes, including a Commentary on the Gospel of St Luke and a number of smaller works; the most famous of which are The Mind's Road to God (Itinerarium mentis in Deum), an outline of his theology or Brief Reading (Breviloquium), Reduction of the Arts to Theology (De reductione artium ad theologiam), and Soliloquy on the Four Spiritual Exercises (Soliloquium de quatuor mentalibus exercitiis), The Tree of Life (Lignum vitae), and The Triple Way (De Triplici via), the latter three written for the spiritual direction of his fellow Franciscans.

German philosopher Dieter Hattrup denies that Reduction of the Arts to Theology was written by Bonaventure, claiming that the style of thinking does not match Bonaventure's original style.[12] His position is no longer tenable given recent research: the text remains "indubitably authentic".[13][14] A work that for many years was falsely attributed to Bonaventure, De septem itineribus aeternitatis, was actually written by Rudolf von Biberach (c. 1270 – 1329).[15]

For St. Isabelle of France, the sister of King St. Louis IX of France, and her monastery of Poor Clares at Longchamps, St. Bonaventure wrote the treatise, Concerning the Perfection of Life.[1]

The Commentary on the Sentences, written at the command of his superiors when he was twenty-seven,[11] is Bonaventure's major work and most of his other theological and philosophical writings are in some way dependent on it. However, some of Bonaventure's later works, such as the Lectures on the Six Days of Creation, show substantial developments beyond the Sentences.[16][17]

Bonaventure wrote on almost every subject treated by the Schoolmen, and his writings are very numerous. The greater number of them deal with philosophy and theology. No work of Bonaventure's is exclusively philosophical and bear striking witness to the mutual interpenetration of philosophy and theology that is a distinguishing mark of the Scholastic period.[11]

Much of St. Bonaventure’s philosophical thought shows a considerable influence by St. Augustine. So much so that De Wulf considers him the best representative of Augustinianism. St. Bonaventure adds Aristotelian principles to the Augustinian doctrine especially in connection with the illumination of the intellect according to Gilson.[18] Augustine, who had imported into the west many of the doctrines that would define scholastic philosophy, was an incredibly important source of Bonaventure's Platonism. The mystic Dionysius the Areopagite was another notable influence.

In philosophy Bonaventure presents a marked contrast to his contemporaries, Roger Bacon and Thomas Aquinas. While these may be taken as representing, respectively, physical science yet in its infancy, and Aristotelian scholasticism in its most perfect form, he presents the mystical and Platonizing mode of speculation that had already, to some extent, found expression in Hugo and Richard of St. Victor, and in Bernard of Clairvaux. To him, the purely intellectual element, though never absent, is of inferior interest when compared with the living power of the affections or the heart.[4] 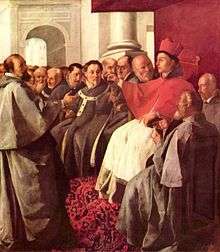 St. Bonaventure receives the envoys of the Byzantine Emperor at the Second Council of Lyon.

Like Thomas Aquinas, with whom he shared numerous profound agreements in matters theological and philosophical, he combated the Aristotelian notion of the eternity of the world vigorously. Bonaventure accepts the Platonic doctrine that ideas do not exist in rerum natura, but as ideals exemplified by the Divine Being, according to which actual things were formed; and this conception has no slight influence upon his philosophy.[4] Due to this philosophy, physicist and philosopher Max Bernhard Weinstein contended that Bonaventure showed strong pandeistic inclinations.[19] Like all the great scholastic doctors, Bonaventura starts with the discussion of the relations between reason and faith. All the sciences are but the handmaids of theology; reason can discover some of the moral truths that form the groundwork of the Christian system, but others it can only receive and apprehend through divine illumination. To obtain this illumination, the soul must employ the proper means, which are prayer, the exercise of the virtues, whereby it is rendered fit to accept the divine light, and meditation that may rise even to ecstatic union with God. The supreme end of life is such union, union in contemplation or intellect and in intense absorbing love; but it cannot be entirely reached in this life, and remains as a hope for the future.[4]

A master of the memorable phrase, Bonaventure held that philosophy opens the mind to at least three different routes humans can take on their journey to God. Non-intellectual material creatures he conceived as shadows and vestiges (literally, footprints) of God, understood as the ultimate cause of a world philosophical reason can prove was created at a first moment in time. Intellectual creatures he conceived of as images and likenesses of God, the workings of the human mind and will leading us to God understood as illuminator of knowledge and donor of grace and virtue. The final route to God is the route of being, in which Bonaventure brought Anselm's argument together with Aristotelian and Neoplatonic metaphysics to view God as the absolutely perfect being whose essence entails its existence, an absolutely simple being that causes all other, composite beings to exist.[9]

Bonaventure, however, is not only a meditative thinker, whose works may form good manuals of devotion; he is a dogmatic theologian of high rank, and on all the disputed questions of scholastic thought, such as universals, matter, the principle of individualism, or the intellectus agens, he gives weighty and well-reasoned decisions. He agrees with Saint Albert the Great in regarding theology as a practical science; its truths, according to his view, are peculiarly adapted to influence the affections. He discusses very carefully the nature and meaning of the divine attributes; considers universals to be the ideal forms pre-existing in the divine mind according to which things were shaped; holds matter to be pure potentiality that receives individual being and determinateness from the formative power of God, acting according to the ideas; and finally maintains that the intellectus agens has no separate existence. On these and on many other points of scholastic philosophy the "Seraphic Doctor" exhibits a combination of subtlety and moderation, which makes his works particularly valuable.[4]

In form and intent the work of St. Bonaventure is always the work of a theologian; he writes as one for whom the only angle of vision and the proximate criterion of truth is the Christian faith. This fact influences his importance for the history of philosophy; when coupled with his style, it makes Bonaventure perhaps the least accessible of the major figures of the thirteenth century. This is true, not because he is a theologian, but because philosophy interests him largely as a praeparatio evangelica, as something to be interpreted as a foreshadow of or deviation from what God has revealed. In a way that is not true of Aquinas or Albert or Scotus, Bonaventure does not survive well the transition from his time to ours. It is difficult to imagine a contemporary philosopher, Christian or not, citing a passage from Bonaventure to make a specifically philosophical point. One must know philosophers to read Bonaventure, but the study of Bonaventure is seldom helpful for understanding philosophers and their characteristic problems. Bonaventure as a theologian is something else again, of course, as is Bonaventure the edifying author. It is in those areas, rather than in philosophy proper, that his continuing importance must be sought.[20]

Places, churches, and schools named in his honour

Bonaventuracollege is a Dutch Catholic Highschool situated in Leiden.