Philosophy of space and time

The existence and nature of space and time (or space-time) are central topics in the philosophy of physics.[2]

Time, in many philosophies, is seen as change.

Time is often thought to be a fundamental quantity (that is, a quantity which cannot be defined in terms of other quantities), because time seems like fundamentally basic concept, such that one cannot define it in terms of anything simpler. However, certain theories such as loop quantum gravity claim that spacetime is emergent. As Carlo Rovelli, one of the founders of loop quantum gravity has said: "No more fields on spacetime: just fields on fields".[3] Time is defined via measurement—by its standard time interval. Currently, the standard time interval (called "conventional second", or simply "second") is defined as 9,192,631,770 oscillations of a hyperfine transition in the 133 caesium atom. (ISO 31-1). What time is and how it works follows from the above definition. Time then can be combined mathematically with the fundamental quantities of space and mass to define concepts such as velocity, momentum, energy, and fields.

Both Newton and Galileo,[4] as well as most people up until the 20th century, thought that time was the same for everyone everywhere. Our modern conception of time is based on Einstein's theory of relativity and Minkowski's spacetime, in which rates of time run differently in different inertial frames of reference, and space and time are merged into spacetime. Time may be quantized, with the theoretical smallest time being on the order of the Planck time. Einstein's general relativity as well as the redshift of the light from receding distant galaxies indicate that the entire Universe and possibly space-time itself began about 13.8 billion years ago in the big bang. Einstein's theory of special relativity mostly (though not universally) made A-theories of time, where there is something metaphysically special about the present seem much less plausible, as the reference-frame-dependence of time seems to not allow the idea of a privileged present moment.

Some theories, most notably special and general relativity, suggest that suitable geometries of spacetime, or certain types of motion in space, may allow time travel into the past and future. Concepts that aid such understanding include the closed timelike curve.

Albert Einstein's special theory of relativity (and, by extension, the general theory) predicts time dilation that could be interpreted as time travel. The theory states that, relative to a stationary observer, time appears to pass more slowly for faster-moving bodies: for example, a moving clock will appear to run slow; as a clock approaches the speed of light its hands will appear to nearly stop moving. The effects of this sort of time dilation are discussed further in the popular "twin paradox". These results are experimentally observable and affect the operation of GPS satellites and other high-tech systems used in daily life.

These effects are to some degree similar to hibernation, or cooling of live objects (which slow down the rates of chemical processes in the subject) almost indefinitely suspending their life thus resulting in "time travel" toward the future, but never backward. They do not violate causality. This is not typical of the "time travel" featured in science fiction (where causality is violated at will), and there is little doubt surrounding its existence. "Time travel" will hereafter refer to travel with some degree of freedom into the past or future of proper time.

Many in the scientific community believe that time travel is highly unlikely, because it violates causality i.e. the logic of cause and effect. For example, what happens if you attempt to go back in time and kill yourself at an earlier stage in your life (or your grandfather, which leads to the grandfather paradox)? Stephen Hawking once suggested that the absence of tourists from the future constitutes a strong argument against the existence of time travel— a variant of the Fermi paradox, with time travelers instead of alien visitors.

The Everett, or many-worlds interpretation of quantum mechanics claims that the wave-function of a quantum system is telling us claims about the reality of that physical system. It denies wavefunction collapse, and claims that superposition states should be interpreted literally as describing the reality of many-worlds where objects are located, and not simply indicating the indeterminacy of those variables. This is sometimes argued as a corollary of scientific realism,[6] which states that scientific theories aim to give us literally true descriptions of the world.

One issue for the Everett interpretation is the role that probability plays on this account. The Everettian account is completely deterministic, whereas probability seems to play an ineliminable role in quantum mechanics.[7] Contemporary Everettians have argued that one can get an account of probability that follows the Born Rule through certain decision-theoretic proofs.[8]

The uncertainty principle is a mathematical relation asserting an upper limit to the accuracy of the simultaneous measurement of any pair of conjugate variables, e.g. position and momentum. In the formalism of operator notation, this limit is the evaluation of the commutator of the variables' corresponding operators.

The uncertainty principle arose as an answer to the question: How does one measure the location of an electron around a nucleus if an electron is a wave? When quantum mechanics was developed, it was seen to be a relation between the classical and quantum descriptions of a system using wave mechanics.

In March 1926, working in Niels Bohr's institute, Werner Heisenberg formulated the principle of uncertainty thereby laying the foundation of what became known as the Copenhagen interpretation of quantum mechanics. Heisenberg had been studying the papers of Paul Dirac and Pascual Jordan. He discovered a problem with measurement of basic variables in the equations. His analysis showed that uncertainties, or imprecisions, always turned up if one tried to measure the position and the momentum of a particle at the same time. Heisenberg concluded that these uncertainties or imprecisions in the measurements were not the fault of the experimenter, but fundamental in nature and are inherent mathematical properties of operators in quantum mechanics arising from definitions of these operators.[9]

The term Copenhagen interpretation of quantum mechanics was often used interchangeably with and as a synonym for Heisenberg's uncertainty principle by detractors (such as Einstein and the physicist Alfred Landé) who believed in determinism and saw the common features of the Bohr-Heisenberg theories as a threat. Within the Copenhagen interpretation of quantum mechanics the uncertainty principle was taken to mean that on an elementary level, the physical universe does not exist in a deterministic form, but rather as a collection of probabilities, or possible outcomes. For example, the pattern (probability distribution) produced by millions of photons passing through a diffraction slit can be calculated using quantum mechanics, but the exact path of each photon cannot be predicted by any known method. The Copenhagen interpretation holds that it cannot be predicted by any method, not even with theoretically infinitely precise measurements.

History of the philosophy of physics

The implicit axioms of Aristotelian physics with respect to movement of matter in space were superseded in Newtonian physics by Newton's First Law of Motion.[12]

"Every body" includes the Moon, and an apple; and includes all types of matter, air as well as water, stones, or even a flame. Nothing has a natural or inherent motion.[13] Absolute space being three-dimensional Euclidean space, infinite and without a center.[13] Being "at rest" means being at the same place in absolute space over time.[14] The topology and affine structure of space must permit movement in a straight line at a uniform volocity; thus both space and time must have definite, stable dimensions.[15]

Gottfried Wilhelm Leibniz, 1646 – 1716, was a contemporary of Newton. He contributed a fair amount to the statics and dynamics emerging around him, often disagreeing with Descartes and Newton. He devised a new theory of motion (dynamics) based on kinetic energy and potential energy, which posited space as relative, whereas Newton was thoroughly convinced that space was absolute. An important example of Leibniz's mature physical thinking is his Specimen Dynamicum of 1695.[16]

Until the discovery of subatomic particles and the quantum mechanics governing them, many of Leibniz's speculative ideas about aspects of nature not reducible to statics and dynamics made little sense. For instance, he anticipated Albert Einstein by arguing, against Newton, that space, time and motion are relative, not absolute:[17] "As for my own opinion, I have said more than once, that I hold space to be something merely relative, as time is, that I hold it to be an order of coexistences, as time is an order of successions."[18] 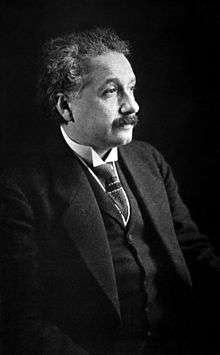 Einstein was interested in the philosophical implications of his theory.

Albert Einstein was extremely interested in the philosophical conclusions of his work. He writes:

"I fully agree with you about the significance and educational value of methodology as well as history and philosophy of science. So many people today—and even professional scientists—seem to me like somebody who has seen thousands of trees but has never seen a forest. A knowledge of the historic and philosophical background gives that kind of independence from prejudices of his generation from which most scientists are suffering. This independence created by philosophical insight is—in my opinion—the mark of distinction between a mere artisan or specialist and a real seeker after truth." Einstein. letter to Robert A. Thornton, 7 December 1944. EA 61-574.

"How does it happen that a properly endowed natural scientist comes to concern himself with epistemology? Is there no more valuable work in his specialty? I hear many of my colleagues saying, and I sense it from many more, that they feel this way. I cannot share this sentiment. ... Concepts that have proven useful in ordering things easily achieve such an authority over us that we forget their earthly origins and accept them as unalterable givens. Thus they come to be stamped as 'necessities of thought,' 'a priori givens,' etc."

"The path of scientific advance is often made impassable for a long time through such errors. For that reason, it is by no means an idle game if we become practiced in analyzing the long-commonplace concepts and exhibiting [revealing, exposing? -Ed.] those circumstances upon which their justification and usefulness depend, how they have grown up, individually, out of the givens of experience. By this means, their all-too-great authority will be broken." Einstein, 1916, "Memorial notice for Ernst Mach," Physikalische Zeitschrift 17: 101-02.