On 23 June 1935 he founded the Reform Party and on the formation of the Arab Higher Committee on 25 April 1937 was the party's representative on the AHC.[1] 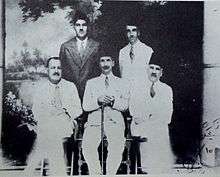 al-Khalidi, seated in front, together with the four other deportees in Seychelles, 1938.

On 1 October 1937, following disturbances and violence during the 1936–39 Arab revolt in Palestine, the British Mandate administration outlawed the AHC and several Arab political parties and arrested a number of Arab political leaders. The Reform Party was dissolved and Khalidi was one of the leaders arrested.[2][3] He was removed as mayor of Jerusalem and deported to the Seychelles, together with four other Arab nationalist political leaders.[2] He was released in December 1938[3] to enable him to take part in the London Conference in February 1939, and was among those rejecting the British Government's White Paper of 1939.

He returned to Palestine in 1943 and joined the reformed Arab Higher Committee in 1945, becoming its secretary in 1946. Khalidi was a member of the short-lived All-Palestine Government established under Egypt's patronage in Gaza in September 1948. He published a book of his memoirs in the same year, while exiled in Beirut.[4] He prospered under Jordanian rule, he was custodian and supervisor of the Haram al-Sharif in 1951, became a cabinet minister (for Foreign Affairs) and briefly prime minister in 1957.[5] In 1958, he wrote a book in English entitled Arab Exodus, though it has never been published.[4]

He was the brother of Ismail Khalidi and the uncle of Rashid Khalidi and Raja Khalidi.[7]