Wasfi al-Tal (also Wasfi Tel) (1919 – 28 November 1971) (Arabic: وصفي التل‎‎) was Prime Minister of Jordan for three separate terms. In 1971, he was assassinated by the Black September unit of the Palestine Liberation Organization outside a Cairo hotel.[1] Tal was prime minister and defense minister during the Black September uprising by Palestinian fighting groups in 1970. He earned the ire of PLO leaders for his role in repressing the uprising.

He was the third senior Jordanian political figure assassinated between 1951 and 1971; the first two were King Abdullah and Hazza Majali, the Jordanian prime minister.[2]

Tal was born in Irbid, a city in northern Jordan, in 1919.[3] He served as a captain in the British Army during World War II. He also took part in the 1948 Palestine war, fighting for the Arab armies.[3] He became a major in the Jordanian army shortly before graduating from American University of Beirut. After graduation, he began to work in the Jordanian civil service.[3] Next, he served as chief press officer. Later he was named as the Jordanian ambassador, and he served as an ambassador in Germany, Iran and Iraq.[3]

Tal was married to Sadia Jabri, who had been former wife of the Palestinian leader of the 1940s, Musa Alami. They had no children.[3] 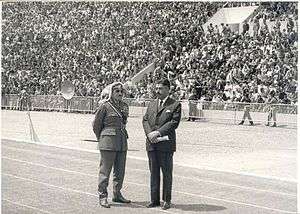 On 28 November 1971, four Black September gunmen assassinated Tal in the lobby of the Sheraton Cairo Hotel in Egypt while he was attending an Arab League summit in the city.[4][5] Among other acts, Black September accused Tal of personally torturing and executing Abu Ali Iyad, a Fatah field commander whose partisans formed the backbone of the Black September organization.[6] Historian Patrick Seale claims that one of the assassins, Munshir al-Khalifa, was one of Abu Ali Iyad's soldiers who sought to avenge his commander's death.[6][7] As Tal lay dying, "one of the assassins knelt and lapped with his tongue the blood flowing across the marble floor."[8] Tal's reported last words were, "They've killed me. Murderers, they believe only in fire and destruction."[9]

Tal was the first victim of the newly formed Black September Organization, a more militant offshoot of the Palestinian militant organization Fatah. His assassins were released on low bail and allowed to leave Egypt. Yasser Arafat, Fatah's leader, claimed responsibility for the killing.[4]

Tal's body was flown back to Amman on 28 November 1971. He was buried in the royal cemetery after the prayers in the Royal Mosque in Amman on 29 November.[10]