For other uses, see Hut (disambiguation).

Drawings of petroglpyhs from the Tagar Culture, 1st millennium BC in Krasnoyarsk Krai, Russia. 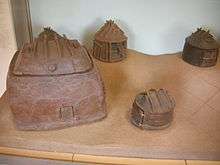 Huts and a larger building in the form of burial urns at the museum at the Baths of Diocletian in Rome, Italy. Image: Sailko 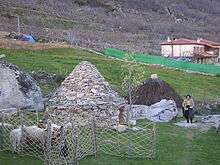 A hut is a primitive dwelling, which may be constructed of various local materials. Huts are a type of vernacular architecture because they are built of readily available materials such as wood, snow, ice, stone, grass, palm leaves, branches, hides, fabric, and/or mud using techniques passed down through the generations.

A hut is a shape of a lower quality than a house (durable, well built dwelling) but higher quality than a shelter (place of refuge or safety) such as a tent and is used as temporary or seasonal shelter or in primitive societies as a permanent dwelling.[1]

Huts exist in practically all nomadic cultures. Some huts are transportable and can stand most conditions of weather.

The term is often employed by people who consider non-western style homes in tropical and sub-tropical areas to be crude or primitive, but often the designs are based on traditions of local craftsmanship using sophisticated architectural techniques. The designs in tropical and sub-tropical areas favour high airflow configurations built from non-conducting materials, which allow heat dissipation. The term house or home is considered by some to be more appropriate.

In the Western world the word hut is often used for a wooden shed.

The term has also been adopted by climbers and backpackers to refer to a more solid and permanent structure offering refuge. These vary from simple bothies – which are little more than very basic shelters – to mountain huts that are far more luxurious and can even include facilities such as restaurants. 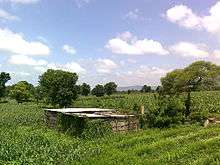 Hut in farm outside Indian village 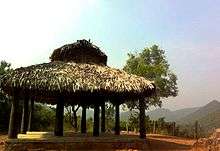 Huts are used by shepherds when moving livestock between seasonal grazing areas such as mountainous and lowland pastures (transhumance).

They are also commonly used by backpackers and other travelers in rural areas.

Some displaced populations of people use huts throughout the world during a diaspora. For example, temporary collectors in the wilderness agricultural workers at plantations in the Amazon jungle.

Huts have been built for purposes other than as a dwelling such as storage, workshops, and teaching. 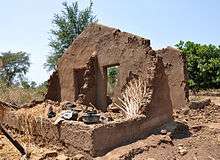 Remains of a mud hut, with interior layers exposed. This hut was destroyed during a major earthquake.

Many huts are designed to be relatively quick and inexpensive to build. Construction often does not require specialized tools or knowledge.

Hut is used to name commercial stores, companies, and concepts. The name implies a small, casual venue, often with a fun and friendly atmosphere. Examples include Pizza Hut and Sunglass Hut. Kiosks may be constructed to look like huts and are often found at parks, malls, beaches, or other public places, selling a variety of inexpensive food or goods. Luxury hotels in tropical areas where guests are assigned to occupy their own freestanding structure sometimes call the structure a "hut", though such huts typically bear little more than superficial resemblance to the traditional concept of a hut.