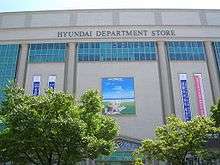 The company began as KeumKang Development Industrial Co., Ltd., established in 1971. It opened its first store in Ulsan in 1977. The flagship store, in the affluent Seoul neighborhood of Apgujeong, was opened in 1985. Hyundai department Store Group has seven other stores in the Seoul megalopolis: COEX (World Trade Center Seoul) at Samseong Station, Mokdong at Hyundai Hyperion skyscraper condominium , Sinchon, Mia, Cheonho at Gangdong-gu, Bucheon, and Kintex Exhibition Center in northwest Seoul. It also has stores in Busan, Daegu, Ulsan, Cheongju, and an outlet in Gasan-dong, Seoul.