The prefecture-level city of Karamay is completely surrounded and divided by the Ili Kazak Autonomous Prefecture but is not part of it.

The upper course of the Ili River and that of Irtysh River (Ertix River) flow through the prefecture.

As a Sub-provincial Autonomous Prefecture, Ili's primary subdivisions include Tacheng and Altay prefectures, both to the northeast of the capital. Ili also directly controls 3 county-level cities, 7 counties, and 1 autonomous county. (see Administrative divisions of the People's Republic of China#Levels). 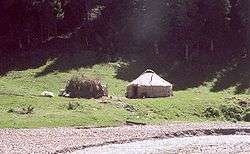 Geographically, Ili Kazakh Autonomous Prefecture can be divided into two parts. Altay Prefecture and Tacheng Prefectures, together with the city of Kuitun, occupy most of the Dzungarian Basin in northern Xinjiang, north of the Borohoro Range. The rest of the Ili Kazakh Autonomous Prefecture is located entirely within the Ili River Basin, between Borohoro and the main range of Tian Shan. This latter region is exactly coterminous with the historical area that in the past was often called by Russians and Westerners as Kulja or Kuldja (see, e.g. 1911 Encyclopædia Britannica article on Kulja) or Ili.

The map of the Ili region, ca. 1809. It's "upside down", i.e. the south is on top, and the west, on the right. The nine fortified towns are shown as double squares

Before the advent of the Qin dynasty (221 BC – 206 BC), Ili was occupied by the Ussuns, a tributary tribe of the Huns. The Ussuns were driven away in the 6th century AD by the northern Xiongnu, who established the Turkic Khaganate in 552. Later this Khulja territory became a dependency of Dzungaria. During the Tang dynasty (618–907), the khanate became the Protectorate General to Pacify the West of the Tang Empire.

The Uyghur Khaganate, and in the 12th century the Kara-Khitai, took possession of the area in turn. Genghis Khan conquered Kulja in the 13th century, and the Mongol Khans resided in the valley of the Ili. It is supposed that the Oirats conquered it at the end of the 16th or the beginning of the 17th century.

The Oirats, or more precisely Dzungars, controlled both Dzungaria and the Ili Basin until 1755 as the Dzungar Khanate, when it was annexed by the Manchu-run Qing dynasty under the Qianlong Emperor. Having defeated the Dzungars in the Dzungarian and Ili Basins, as well as the Afaqi Khojas in Kashgaria, the Qing court decided to make the Ili basin the main base of their control in Xinjiang.

In the 1760s, the Qing built nine fortified towns (九城) in the Ili Basin:

Huiyuan Cheng, as the seat of the General of Ili, the chief commander of the Qing troops in Xinjiang, became the administrative capital of the region. It was provided with a large penal establishment and a strong garrison. This city was called New Kulja, Manhcu Kulja, Chinese Kulja, or Ili by the Russians and Westerners, to distinguish it from Nigyuan/Yining, known as Old Kulja or Taranchi Kulja.

The first General of Ili was Ming Rui. The Qing tradition, unbroken until the days of Zuo Zongtang in the 1870s, was to only appoint Manchus as officials in Xinjiang. 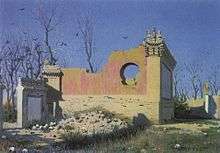 During the insurrection of 1864 the Dungans and Taranchis of the area formed the Taranchi Sultanate. Huiyuan (Manchu Kulja) was the last Qing fortress in the Ili Valley to fall to the rebels. The insurgent Dungans massacred most of Manchu Kulja's inhabitants; Governor General Mingsioi (Ming Xü) assembled his family and staff in his mansion, and blew it up, dying under its ruins.

The sultanate led to the occupation of the Ili basin (Kulja in contemporary Western terms) by the Russians in 1871. Ten years later the territory was restored to China, and its boundary with Russia was assigned in accordance to the Treaty of Saint Petersburg (1881).

After Chinese authority was restored, the "Manchu Kuldja" was rebuilt as the city of Suiding (now known as Shuiding), some 8 km (5.0 mi) north of the old Huiyuan site.

The Republic of China

In July 1945, Chingil, Bole and Quanxi (精河、博乐、温泉) of Ili were made into a new autonomous prefecture now not part of Ili: Bortala.

The People's Republic of China

In 1949, Ili was made a special area (专区) of Xinjiang, with one city and nine counties, and was upgraded to a city in 1952. On November 27, 1954, the Ili Autonomous Prefecture was established to include the prefectures of Ili, Altay, and Tacheng. The Ili Prefecture was abolished in 1955. Its one city and nine counties are now under the direct control of the autonomous prefecture.