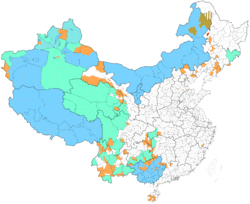 Map of all minority regions under autonomous rule designated by the Central Government. 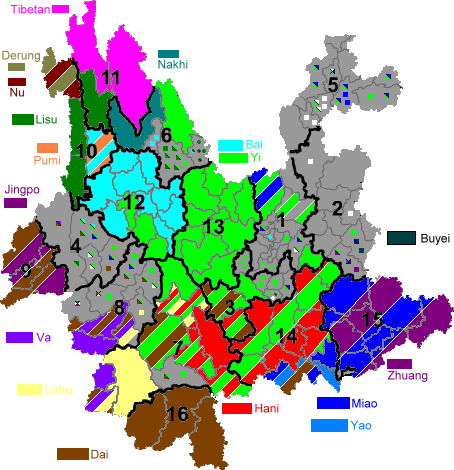 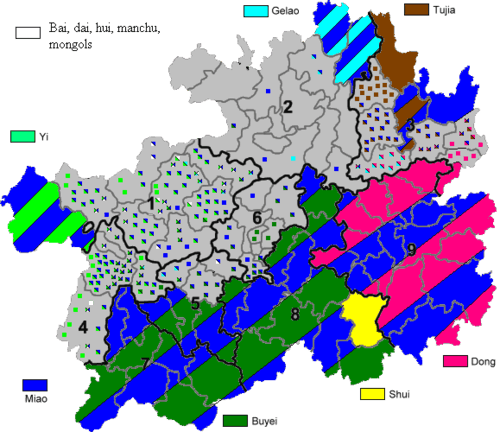 Autonomous administrative divisions of the People's Republic of China are specific areas associated with one or more ethnic minorities that are designated as autonomous within the People's Republic of China (PRC). These areas are recognized in the PRC's constitution and are nominally given a number of rights not accorded to other administrative divisions. For example, Tibetan minorities in Autonomous regions are granted rights and support not given to the Han Chinese, such as fiscal and medical subsidies.[1]

As these autonomous areas were created by the PRC, they are not recognised by the Republic of China on Taiwan which ruled Mainland China before the PRC's creation.

The names of most of the PRC's autonomous areas are made from linking together:

Some autonomous areas have more than one specified minority, which tend to be listed in the name of the prefecture, creating rather long names. Two autonomous counties simply use "Various Nationalities" in their names as placeholders, rather than listing out all of their designated ethnicities:

Autonomous regions, prefectures, counties, and banners are covered under Section 6 of Chapter 3 (Articles 111-122) of the Constitution of the People's Republic of China, and with more detail under the Law of the People's Republic of China on Regional National Autonomy (《中华人民共和国民族区域自治法》). The constitution states that the head of government of each autonomous areas must be of the ethnic group as specified by the autonomous area (Tibetan, Uyghur, etc.). The constitution also guarantees a range of rights including: independence of finance, independence of economic planning, independence of arts, science and culture, organization of local police, and use of local language. In addition, the head of government of each autonomous region is known as a "chairman", unlike provinces, where they are known as "governors".

Of the five autonomous regions, only Tibet has an absolute majority (>50%) of the designated ethnic group, namely, the Tibetans. Xinjiang has a plurality (<50%) of the designated ethnic group, the Uyghurs, though this is disputed by Uyghur independence advocates, who claim that the Han Chinese population in Xinjiang has been severely understated. The remaining three autonomous regions have absolute majorities of Han Chinese, the majority ethnicity of China.

The first autonomous region to be established was Inner Mongolia, created within communist-held territory in 1947, two years before the establishment of the People's Republic. Xinjiang was converted from a province to an autonomous region in 1955. Guangxi and Ningxia followed in 1957, and Tibet Autonomous Region was formally established in 1965.