Not to be confused with Iranian Plate.

Topographic map of the Iranian plateau connecting to Anatolia in the west and Hindu Kush and Himalaya in the east. The Caspian Sea is absent from the topographic rendering. It is located in what appears here as the flatland depression directly north of the Persian Gulf at the border of the Alborz mountain range. 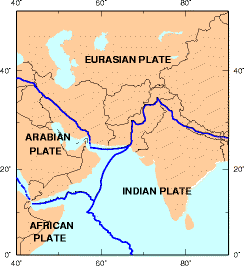 Closeup of the boundaries with the Eurasian, Arabian and Indian plates.

The Persian Plateau,[1][2] or Iranian Plateau, is a geological formation in Western Asia and Central Asia. It is the part of the Eurasian Plate wedged between the Arabian and Indian plates, situated between the Zagros Mountains to the west, the Caspian Sea and the Kopet Dag to the north, the Armenian Highlands and the Caucasus mountains in the northwest, the Hormuz Strait and Persian gulf to the south and the Indus River to the east in Pakistan.

As a historical region, it includes Parthia, Media, Persis, the heartlands of Iran and some of its recently lost territories.[3] The Zagros Mountains form the plateau's western boundary, and its eastern slopes may be included in the term. The Encyclopædia Britannica excludes "lowland Khuzestan" explicitly[4] and characterizes Elam as spanning "the region from the Mesopotamian plain to the Iranian Plateau".[5]

From the Caspian in the northwest to Baluchistan in the south-east, the Iranian Plateau extends for close to 2,000 km. It encompasses the greater part of Iran, Afghanistan and Pakistan west of the Indus River on an area roughly outlined by the quadrangle formed by the cities of Tabriz, Shiraz, Peshawar and Quetta containing some 3,700,000 square kilometres (1,400,000 sq mi). In spite of being called a "plateau", it is far from flat but contains several mountain ranges, the highest peak being Damavand in the Alborz at 5610 m, and the Lut basin east of Kerman in Central Iran falling below 300 m.

In geology, the plateau region of Iran primarily formed of the accretionary Gondwanan terranes between the Turan platform to the north and the Main Zagros Thrust, the suture zone between the northward moving Arabian plate and the Eurasian continent, is called the Iranian plateau. It is a geologically well-studied area because of general interest in continental collision zones, and because of Iran's long history of research in geology, particularly in economic geology (although Iran's major petroleum reserves are not in the plateau).

The Iranian plateau in geology refers to a geographical area north of the great folded mountain belts resulting from the collision of the Arabian plate with the Eurasian plate. In this definition, the Iranian plateau does not cover southwestern Iran. It extends from East Azerbaijan Province in northwest of Iran (Persia) all the way to Pakistan west of the Indus River. It also includes smaller parts of the Republic of Azerbaijan and Turkmenistan.

Its mountain ranges can be divided into five major sub-regions[6] (see below).

The Northwestern Iranian Plateau, where the Pontic and Taurus Mountains converge, is rugged country with higher elevations, a more severe climate, and greater precipitation than are found on the Anatolian Plateau. The region is known as the Anti-Taurus, and the average elevation of its peaks exceeds 3,000 m. Mount Ararat, at 5,137 meters (16,854 ft) the highest point in Turkey, is located in the Anti-Taurus. Lake Van is situated in the mountains at an elevation of 1,546 meters (5,072 ft).

The headwaters of major rivers arise in the Anti-Taurus: the east-flowing Aras River, which empties into the Caspian Sea; the south-flowing Euphrates and Tigris join in Iraq before emptying into the Persian Gulf. Several small streams that empty into the Black Sea or landlocked Lake Van also originate in these mountains. The Indus River begins in the highlands of Tibet and flows the length of Pakistan almost tracing the eastern edge of the Iranian plateau. The Indus River forms the Iranian plateau's eastern boundary.

Southeast Anatolia lies south of the Anti-Taurus Mountains. It is a region of rolling hills and a broad plateau surface that extends into Syria. Elevations decrease gradually, from about 800 meters (2,600 ft) in the north to about 500 meters (1,600 ft) in the south. Traditionally, wheat and barley are the main crops of the region.

In the Bronze Age, Elam stretched across the Zagros mountains, connecting Mesopotamia and the Iranian Plateau. The kingdoms of Aratta known from cuneiform sources may have been located in the Central Iranian Plateau.

In classical antquity the region was known as Persia, due to the Persian Achaemenid dynasty, originating in Persia proper, or Fars.

The Middle Persian Erān (whence Modern Persian Irān) began to be used in reference to the state (rather than as an ethnic designator) from the Sassanid period (see Etymology of Iran).

Archaeological sites and cultures of the Iranian plateau include:

The plateau has historical oak and poplar forests. Oak forests are found around Shiraz. Aspen, elm, ash, willow, walnut, pine, and cypress are also found, though the latter two are rare. As of 1920, poplar was harvested for making doors. Elm was used for ploughs. Other trees like acacia, cypress, and Turkestan elm were used for decorative purposes. Flower wise, the plateau can grow lilac, jasmine, and roses. Hawthorn and Cercis siliquastrum are common, which are both used for basket weaving.[7]

The plateau also produces wheat, barley, millet, beans, opium, cotton, lucerne, and tobacco. The barley is fed mainly to horses. Sesame is grown and made into sesame oil. Mushrooms and manna were also seen in the plateau area as of 1920. Caraway is grown in the Kerman Province.[7]