Not to be confused with Liriodendron tulipifera (tulip poplar), the source of poplar wood.
For the market research company, see Populus Ltd. For other uses, see Populus (disambiguation).

Populus is a genus of 25–35 species of deciduous flowering plants in the family Salicaceae, native to most of the Northern Hemisphere. English names variously applied to different species include poplar /ˈpɒp.lər/, aspen, and cottonwood.

In the September 2006 issue of Science Magazine, the Joint Genome Institute announced that the western balsam poplar (P. trichocarpa) was the first tree whose full DNA code had been determined by DNA sequencing.[2] 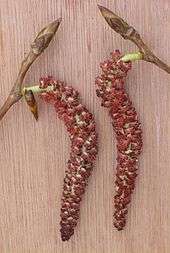 The bark on young trees is smooth, white to greenish or dark grey, and often has conspicuous lenticels; on old trees, it remains smooth in some species, but becomes rough and deeply fissured in others. The shoots are stout, with (unlike in the related willows) the terminal bud present. The leaves are spirally arranged, and vary in shape from triangular to circular or (rarely) lobed, and with a long petiole; in species in the sections Populus and Aigeiros, the petioles are laterally flattened, so that breezes easily cause the leaves to wobble back and forth, giving the whole tree a "twinkling" appearance in a breeze. Leaf size is very variable even on a single tree, typically with small leaves on side shoots, and very large leaves on strong-growing lead shoots. The leaves often turn bright gold to yellow before they fall during autumn.[3][4]

The flowers are mostly dioecious (rarely monoecious) and appear in early spring before the leaves. They are borne in long, drooping, sessile or pedunculate catkins produced from buds formed in the axils of the leaves of the previous year. The flowers are each seated in a cup-shaped disk which is borne on the base of a scale which is itself attached to the rachis of the catkin. The scales are obovate, lobed, and fringed, membranous, hairy or smooth, and usually caducous. The male flowers are without calyx or corolla, and comprise a group of four to 60 stamens inserted on a disk; filaments are short and pale yellow; anthers are oblong, purple or red, introrse, and two-celled; the cells open longitudinally. The female flower also has no calyx or corolla, and comprises a single-celled ovary seated in a cup-shaped disk. The style is short, with two to four stigmata, variously lobed, and numerous ovules. Pollination is by wind, with the female catkins lengthening considerably between pollination and maturity. The fruit is a two- to four-valved dehiscent capsule, green to reddish-brown, mature in midsummer, containing numerous minute light brown seeds surrounded by tufts of long, soft, white hairs which aid wind dispersal.[3][5]

Poplars of the cottonwood section are often wetlands or riparian trees. The aspens are among the most important boreal broadleaf trees.[3]

Poplars and aspens are important food plants for the larvae of a large number of Lepidoptera species. Pleurotus populinus, the aspen oyster mushroom, is found exclusively on dead wood of Populus trees in North America. 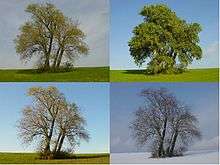 A Populus on a hill through April, September, October, February (Germany)

The genus Populus has traditionally been divided into six sections on the basis of leaf and flower characters;[4][6] this classification is followed below. Recent genetic studies have largely supported this, confirming some previously suspected reticulate evolution due to past hybridisation and introgression events between the groups. Some species (noted below) had differing relationships indicated by their nuclear DNA (paternally inherited) and chloroplast DNA sequences (maternally inherited), a clear indication of likely hybrid origin.[7] Hybridisation continues to be common in the genus, with several hybrids between species in different sections known.[3][8] 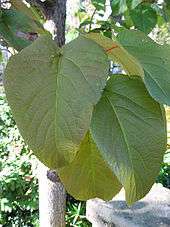 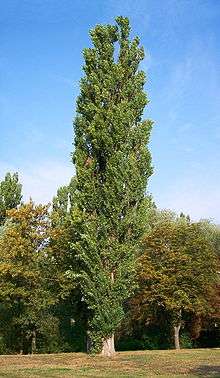 Fastigiate black poplar cultivar of the Plantierensis group, in Hungary 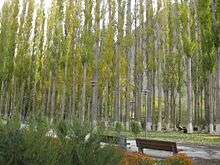 Many poplars are grown as ornamental trees, with numerous cultivars used. They have the advantage of growing to a very large size at a rapid pace. Almost all poplars take root readily from cuttings or where broken branches lie on the ground (they also often have remarkable suckering abilities, and can form huge colonies from a single original tree, such as the famous Pando forest made of thousands of Populus tremuloides clones).

Trees with fastigiate (erect, columnar) branching are particularly popular, and are widely grown across Europe and southwest Asia. However, like willows, poplars have very vigorous and invasive root systems stretching up to 40 m from the trees; planting close to houses or ceramic water pipes may result in damaged foundations and cracked walls and pipes due to their search for moisture. 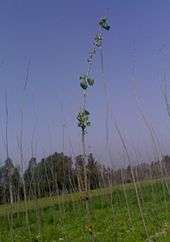 In India, the poplar is grown commercially by farmers, mainly in the Punjab region. Common poplar varieties are:

The trees are grown from kalam or cuttings, harvested annually in January and February, and commercially available up to 15 November.

Although the wood from Populus is known as poplar wood, a common high-quality hardwood "poplar" with a greenish colour is actually from an unrelated genus Liriodendron. Populus wood is a lighter, more porous material.

Its flexibility and close grain make it suitable for a number of applications, similar to those for willow. The Greeks and Etruscans made shields of poplar, and Pliny also recommended poplar for this purpose.[10] Poplar continued to be used for shield construction through the Middle Ages and was renowned for a durability similar to that of oak, but at a substantial reduction in weight.

Interest exists in using poplar as an energy crop for biomass or biofuel, in energy forestry systems, particularly in light of its high energy-in to energy-out ratio, large carbon mitigation potential, and fast growth.

In the United Kingdom, poplar (as with fellow energy crop willow) is typically grown in a short rotation coppice system for two to five years (with single or multiple stems), then harvested and burned - the yield of some varieties can be as high as 12 oven-dry tonnes per hectare every year[13]

Poplar was the most common wood used in Italy for panel paintings; the Mona Lisa and most famous early renaissance Italian paintings are on poplar. The wood is generally white, often with a slightly yellowish colour.

Some stringed instruments are made with one-piece poplar backs; violas made in this fashion are said to have a particularly resonant tone. Similarly, though typically it is considered to have a less attractive grain than the traditional sitka spruce, poplar is beginning to be targeted by some harp luthiers as a sustainable and even superior alternative for their sound boards:[14] in these cases another hardwood veneer is sometimes applied to the resonant poplar base both for cosmetic reasons, and supposedly to fine-tune the acoustic properties.

The Odd Poplers Alley, in Iași, Romania, is one of the spots where Mihai Eminescu sought inspiration in his works (the poem "Down Where the Lonely Poplars Grow"). In 1973, the 15 white poplars still left (with age ranges between 233 and 371 years) were declared natural monuments.[15]

In Pakistan, poplar is grown on commercial level by farmers in Punjab, Sindh, and Khyber Pakhtunkhwa Provinces. However, all varieties are seriously susceptible to termite attack, causing significant losses to poplar every year. Logs of poplar are therefore also used in termite traps (termaps) for biocontrol of termites in crops.

Lombardy poplars are frequently used as a windbreak around agricultural fields to protect against wind erosion.

Logs from the poplar provide a growing medium for shiitake mushrooms.[16]