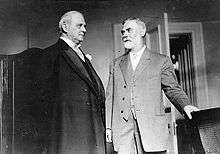 James Robert Mann was born near Bloomington, McLean County, Illinois on October 20, 1856. His older brother was Frank Irving Mann (1854-1937) farmer, editor of the Prairie Farmer news publication, and author of The Farmers Creed.

James attended University of Illinois at Urbana and graduated in 1876. He graduated from Union College of Law in 1881 and became a lawyer in Chicago. Mann held several local political offices before serving in the House of Representatives.

He was admitted to the Illinois bar in 1881 and commenced his practice in Chicago. He held several local offices before being elected as a congressman:

Service in the House

Congressman Mann was one of the sponsors of the Mann-Elkins Act, which gave more power to the Interstate Commerce Commission to regulate railroad rates. He is probably best known for his authorship of the Mann Act of 1910, which was a reaction to the "white slavery" issue and prohibited transportation of women between states for purposes of prostitution. He introduced legislation that became the Pure Food and Drugs Act of 1906.

He was considered to be a leader in the cause of amending the United States Constitution to grant suffrage to women. However, he was quoted as saying, "'They should have been at home where they belonged,' referring to the women in the pageant."[2] He was a leading opponent of the Harrison Act and Prohibition, despite the popularity of such legislation amongst his fellow Midwestern progressives.

Congressman Mann died in Washington, D.C. of pneumonia on November 30, 1922 at age 66 before the close of the 67th United States Congress.[1] He was interred in Oak Woods Cemetery in Chicago.