He studied law with Asa Hascall, a Malone attorney and politician who served as town supervisor, justice of the peace, district attorney, and member of the New York State Assembly.[4] Wheeler was admitted to the bar in 1845, and practiced in Malone. He was District Attorney of Franklin County from 1846 to 1849. He was a member of the Assembly (Franklin Co.) in 1850 and 1851; and of the New York State Senate (17th D.) in 1858 and 1859. 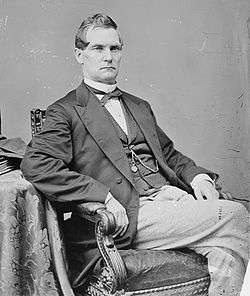 When Congress voted a pay raise in 1873 and made it retroactive for five years (the Salary Grab Act), Wheeler not only voted against the raise, but after it passed he returned his salary increase to the Treasury department.[2]

"[W]e owe it to the cause of universal civil liberty, we owe it to the struggling liberalism of the old world,...that every man within [New York], of whatever race or color, or however poor, helpless, or lowly he may be, in virtue of his manhood, is entitled to the full employment of every right appertaining to the most exalted citizenship."[7]

Wheeler was a delegate to the 1876 Republican National Convention, which had nominated Rutherford B. Hayes for President on the seventh ballot. 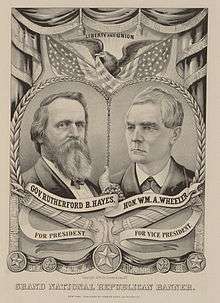 Wheeler was considered a "safe" choice for the vice presidential nomination, as he had not made many enemies over the course of his political career, though Roscoe Conkling himself supported the former congressman from New York Stewart L. Woodford. When the time came for the convention to nominate a vice-presidential candidate, congressman Luke P. Poland of Vermont nominated Wheeler, who immediately surged to the lead over Woodford and several other candidates. By the time the roll call reached New York, the result was apparent, and Woodford withdrew, enabling New York to cast all its votes for Wheeler.[8] Wheeler won the nomination with 366 votes to the 89 for his nearest rival Frederick T. Frelinghuysen, who later served on the Electoral Commission which decided the 1876 election in favor of Hayes and Wheeler.

Governor Hayes, when he heard of Wheeler's nomination, wrote to his wife Lucy: "I am ashamed to say: Who is Wheeler?" Hayes and Wheeler had not served in the House of Representatives at the same time, so Hayes was unfamiliar with his running mate.[9]

Since Wheeler was a recent widower, his wife having died three months before he took the oath of office,[2] he was a frequent guest at the White House's alcohol-free luncheons. As Vice President, Wheeler presided over the Senate. According to Hayes, Wheeler "was one of the few Vice Presidents who were on cordial terms, intimate and friendly, with the President. Our family were heartily fond of him."[2]

Hayes had announced at the start of his administration that he would not run for a second term. Wheeler did not run for the 1880 Republican presidential nomination, and retired at the end of his term.

In January 1881, Wheeler received 10 votes in the New York State Legislature's Republican caucus to determine a nominee for the U.S. Senate seat held by Democrat Francis Kernan. The Republican nomination went to Thomas C. Platt, who received 54 caucus votes; the Republicans controlled the legislature, and Platt defeated Kernan 104 votes to 50.

He retired to Malone in March 1881 when his term as vice president was over. In May 1881, Platt and Roscoe Conkling resigned their U.S. Senate seats, triggering two special elections. In the legislative election for Platt's seat, it took six weeks of balloting to elect a candidate; Wheeler was a candidate, and received as many as 23 votes before Warner Miller was elected with 76 votes on the 46th ballot.

Wheeler was also a candidate for Conkling's seat; the voting went on for several weeks, and he received as many as 50 votes in earlier ballots before Elbridge G. Lapham won with 92 votes on the 56th ballot.