Staggers was born on August 3, 1907 in Keyser, Mineral County, West Virginia, and graduated from Emory and Henry College in 1931 and did graduate work at Duke University. 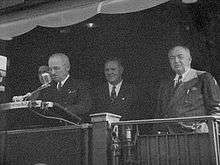 Staggers served as sheriff of Mineral County from 1937 to 1941. He served as a navigator in the U.S. Naval Air Corps during World War II. In 1948, Staggers was elected to the U.S. House of Representatives, representing West Virginia's 2nd Congressional District. He was reelected to another 15 terms in the congress, serving until his retirement in 1981. For 16 years, from 1966 until his retirement, Staggers chaired the powerful House Committee on Foreign and Interstate Commerce (Energy and Commerce), the longest uninterrupted tenure of any chairman of that committee in its over 200 year history (Staggers' successor, John Dingell, served for 14 years from 1981 until 1995 and again from 2007 until 2009). He was a delegate to the Democratic National Convention from West Virginia in 1960. He died in Cumberland, Maryland on August 20, 1991.

On June 10, 1971, the U.S. Supreme Court ruled that the Nixon Administration could not block The New York Times from publishing the Pentagon Papers. The next month, on July 12, 1971, Staggers ordered CBS News to hand over film not used in the documentary, Selling of the Pentagon.

According to Staggers this was the only way to know if the documentary had been accurately edited. The president of CBS News, Frank Stanton, said he would go to jail before complying with Staggers' subpoenas. The House supported Stanton and Staggers was forced to abandon his ultimatum.

In 1973, Staggers heard on the radio the John Lennon song "Working Class Hero" — which includes the lines "'Til you're so fucking crazy you can't follow their rules" and "But you're still fucking peasants as far as I can see" — on WGTB and lodged a complaint with the Federal Communications Commission (FCC).<ref =name="RadioFree">Raz, Guy (29 January 1999). "Radio Free Georgetown". Washington City Paper. Retrieved 31 March 2009. </ref> The manager of the station, Ken Sleeman, faced a year in prison and a $10,000 fine, but defended his decision to play the song saying, "The People of Washington, DC are sophisticated enough to accept the occasional four-letter word in context, and not become sexually aroused, offended, or upset." The charges were dropped.[1]

On May 11, 1973 the House Committee on Interstate and Foreign Commerce which was chaired by Staggers issued a press release[2] summarizing the results of an investigation that determined illegal drug use existed in all level of sports. The investigation also described the degree of use, including steroids and amphetamines, as alarming.

Nationally, his name is perhaps best known as for the federal Staggers Act of 1980, which carried out deregulation of the railroads. Elements of the new law allowed carriers to enter into contracts with shippers to set prices and services, without Interstate Commerce Commission (ICC) approval. The Staggers Act is widely credited with freeing the industry from stagnation under an outdated regulatory structure, allowing it more freedom to compete with other modes of freight transportation such as trucking and air transport. Under the provisions of the Staggers Act, the former regulatory model which had contributed extensively to the massive financial failure of the Penn Central Railroad in the 1970s (forcing the creation of Conrail, which in the beginning was also losing money) was largely rendered impotent. With new market freedoms, the Staggers Act led the railroad industry into a period of much greater stability and profitability, and in many cases, defied opponents' predictions of higher shipping costs. Perhaps even to the amazement of supporters of the Staggers Act, Conrail became a profitable company, repaid its massive federal debts, and was soon a highly desired acquisition target by other large railroad companies, with its lines eventually being sold at a premium to a combination of CSX Corporation and Norfolk Southern interests, preserving competition even as this was accomplished.

Representative Staggers was also a strong supporter of the federally created passenger railroad Amtrak, which did not achieve the potential goal of self-sufficiency. However, creation of Amtrak freed the freight railroad industry from a massive burden of passenger service related-losses and helped preserve a national rail passenger system for the United States, providing some alternatives to an aging Interstate Highway System.

The town and surviving family of Staggers honored him by naming the section of Water Street that runs beside New Creek, in front of the middle school and vocational center, and in front of the bridge to his residence, Harley O. Staggers Sr. Drive.